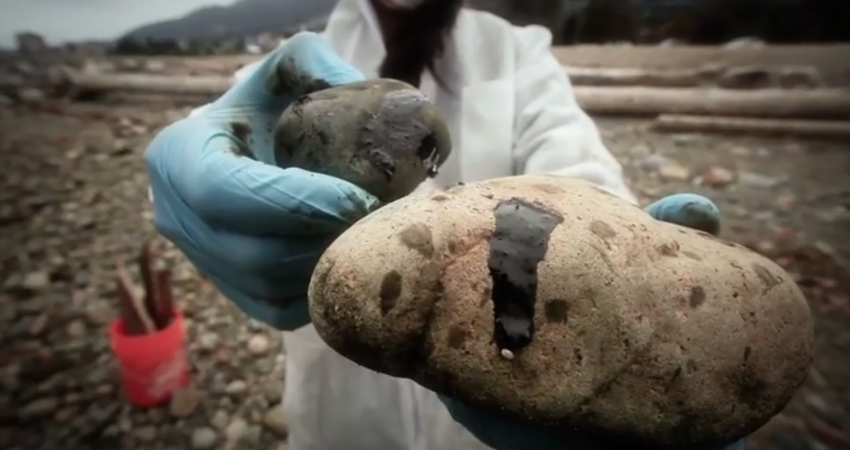 In a video on YouTube, Industry Minister James Moore grimaces as a group of activists approach him with debris covered in bunker fuel that spilled from the vessel Marathassa in English Bay.

The video by political activist group Sh*tHarperDid has since drawn attention on Reddit. It was shot last week at a government press conference to celebrate authorities' "world-class" oil spill response.

Moore is the senior British Columbia MP and has been the lead federal government spokesperson addressing reporters about the spill response and clean-up.

He has repeatedly said the clean-up as "world class," claiming that 80 per cent of the toxic bunker fuel was cleaned up within the first 36 hours. Moore also said 95 percent was cleaned up as of April 11.

Moore has also stated the now-closed Kitsilano Coast Guard station — a casualty of a Conservative government plan to amalgamate coastal response services with private firm West Coast Marine Response Corporation (WCMRC) — would have made no difference in spill response.

"Operational questions should be directed toward the Canadian Coast Guard. Contact information can be found here: http://www.dfo-mpo.gc.ca/media/contacts-eng.htm."

Moore's numbers have been questioned by retired members of the Coast Guard station, including retired Commander Fred Moxey, who is featured in the video and has stated he is willing to sign an affidavit to support his claims.

Moxey told the Vancouver Observer he and his crew at the Kitsilano station were equipped and trained to respond to oil spills. He said their response time to the bay would have been six minutes, had the station remained open.

The destination and disposal of debris and contaminated clean up materials has yet to be fully disclosed.

The City of Vancouver has stated shoreline clean-up is under the direction of West Coast Marine Response Corporation (WCMRC).

WCMRC told the Vancouver Observer disposal of waste has been contracted out.

TerraPure environmental, a subcontractor hired by WCMRC has confirmed for the Vancouver Observer that they received "hydrocarbon (bunker fuel) contaminated water, as well as oily solid waste materials from the shoreline cleanup (oily booms, pads, driftwood, seaweed, PPE, etc.)" at their facility in Surrey.

In an emailed response, TerraPure spokesperson Greg Jones stated that "Liquid waste was processed through our industrial waste water treatment system for removal of contaminants."

Jones added that the toxic bunker fuel "has been recovered and recycled for reuse in bunker fuel markets."

According to Jones, contaminated water was processed through a multi-stage filtration process. He said TerraPure is currently "storing the oil-contaminated solid waste materials from shore line clean-up in secure containment bins" pending approval of a final disposal plan.

The City of Vancouver's most recent update reminds residents to stay out of the water.