50 new B.C. fires over weekend leads to calls for vigilance despite wet weather

The fire that filled the city with smoke last week has more than doubled in size over the weekend, from 30 to 80 square kilometres, thanks to strong winds and an abundance of dry brush and timber. 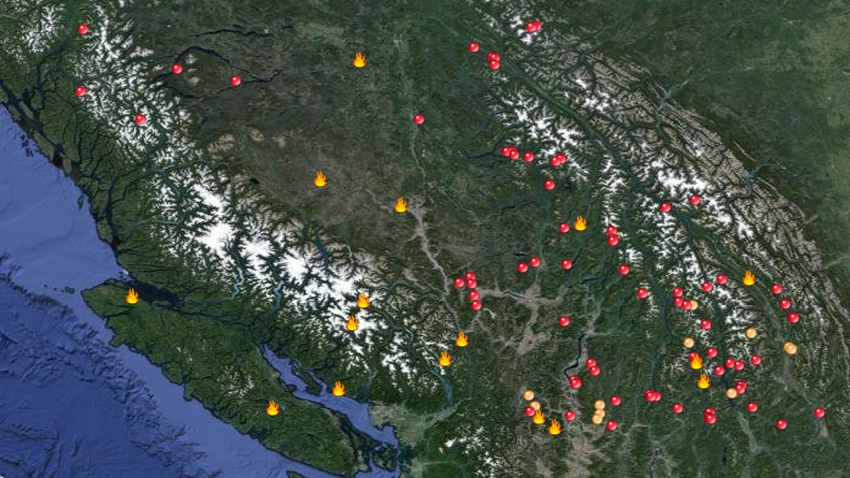 A change in weather could offer British Columbians a break from an otherwise ferocious start to this year's wildfire season, but a provincial official says a few days of rain isn't necessarily enough to hit the reset button on weeks of soaring temperatures and parched conditions.

"It does appear that we've got a bit of a temporary reprieve from the current situation ... but we are still very early in the summer and the weather is fickle and changing daily," said Kevin Skrepnek, a B.C. Wildfire Service spokesperson. "We need to ensure that people aren't getting complacent as a result of this rain."

This shift in weather is expected to continue, said Skrepnek, with cooler temperatures and scattered rain forecast across the province over the coming week.

A campfire ban remains in place provincewide as more than 250 fires rage across B.C., almost 50 of which began on Saturday.

B.C. has spent more than $100 million so far this year fighting wildfires, having burned through its annual budget of $63 million by the end of last month.

About 2,400 personnel are busy fighting the flames — whether on the fire line or in support positions — more than 1,000 of which are contract workers.

B.C. has called in about 100 personnel from outside the province, including from Ontario, Quebec and the Maritimes.

On Monday, 52 Australian firefighters are scheduled to arrive into B.C. to help with fire relief efforts, while another contingent of Down Under personnel will soon show up to assist in other Western Canadian provinces.

The provincial government has also signed a one-month contract to use the Martin Mars water bomber, a veteran firefighting plane based in Port Alberni, B.C.

"The Mars is an iconic aircraft," said Skrepnek about the aged air tanker, which can unload 27,000-litre payload in a single flyby. "It has a somewhat limited mission profile (but) in the right situation it is an incredibly effective tool."

Skrepnek had promising news about the ongoing battle against the province's top-priority fire.

Crews managed to contain just under a third of the Puntzi Lake fire, an aggressive blaze raging in BC's central Cariboo Region, about 150 kilometres west of Williams Lake.

The fire more than doubled in size over the weekend, from 30 to 80 square kilometres, thanks to strong winds and an abundance of dry brush and timber.

So far several properties have been destroyed by the flames, including a hunting and fishing lodge. An order to evacuate affects about 90 properties in the region, while more than 180 remain on evacuation alert.

B.C. has lifted all of the air-quality advisories in southeastern B.C., although smoke advisories remain in place in the province's northwest and Central Interior, Provincial Health Officer Perry Kendall said on Sunday.

"Depending on local conditions people should be alert for diminishing air quality — they'll see and smell the smoke," said the province's top doctor.

There remain 22 fires of note in British Columbia, six states of local emergency and 143 evacuation orders and alerts, with orders affecting more than 650 homes.