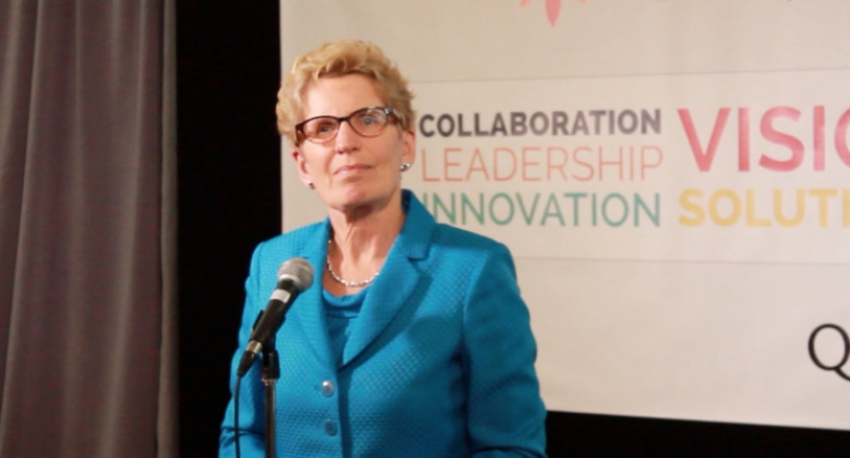 Photo of Ontario Premier Kathleen Wynne by Krystle Alarcon
Ontario Premier Kathleen Wynne said Canada needs to take "more responsibility" to tackle climate change, and that Prime Minister Stephen Harper has to "take a position" on the issue.
Wynne said she believes the prime minister would be present at the UN climate conference in December, but urged the federal government to take a stronger stance.
"I think the federal government has to take a position," Wynne said.
Premiers attended a summit in Quebec City on Tuesday discuss the provinces and territories' environmental policies, in preparation for the United Nations' conference on climate change in Paris in December.
Quebec Premier Philippe Couillard expressed concern over the federal government's inaction leading up to the UN conference.
"We need to talk to them right away, not three weeks, or one month from now... because there's an upcoming conference with the ministers of the environment and we need to work technically first," he said.
"How will we measure targets? How will we evaluate  the method we're using? How will be held accountable for those methods were using region by region? Those conversations need to be started as soon as possible," Couillard said.

Meanwhile, United Nations Framework Convention on Climate Change (UNFCCC) executive secretary Christiana Figueres commended the premiers' efforts. However, she chided a comment made by Saskatchewan premier Wall.
"Canada cannot excuse itself from its responsibility," she said. "because although Canada is only two percent of all emissions (globally), it is the ninth highest emitter in the world. And it certainly has a  responsibility," Figueres said.
Figueres was responding to Saskatchewan Premier Brad Wall's comment that Canada contributes only two per cent of greenhouse emissions to the world. 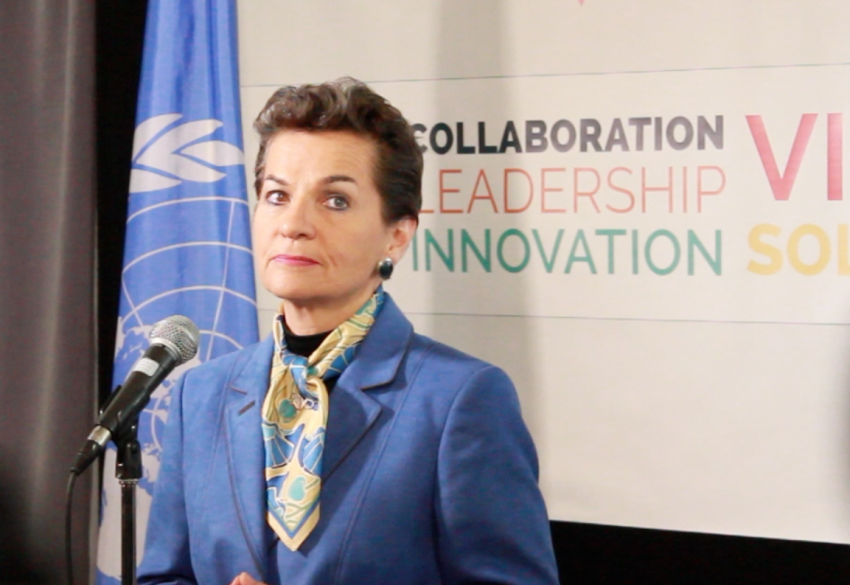 Photo of UNFCC executive secretary Christiana Figueres. Photo by Krystle Alarcon
Wall suggested, in a brief presentation to premiers, that Canada must look to other countries instead, and reduce coal around the world.
"Coal is expanding. As citizens of the world, if we're not committed to finding the technological solutions to clean up coal, then we're kind of playing on the margins," he said.
Video interview: Christiana Figueres says Canada "has no excuse" in tackling climate change.
Wynne echoed the UNFCC executive secretary, saying Canada had to step up to reduce its emissions.
"We are a small country in terms of our population, but we are strong emitters in terms of GHG (greenhouse gases)," Wynne said.
"This gives us more responsibility to create technology and reduce GHG. Cap-and-trade will promote that kind of innovation. I understand where he is coming from but we all have  a role to play so we can support the movement around the world."

An important step, or not enough concrete strategy?

Environmental groups lauded the premiers' efforts to come together and address climate change.
"Today is a big day for Canada because a year and a half ago, climate change was the political third rail," Clean Energy Canada policy director Dan Woynillowicz said.
"We weren't having any level of government really addressing it."
Read More:
Share on Facebook Share on Twitter