The network was "run by insiders who did not know a thing about television" said a Sun News employee. 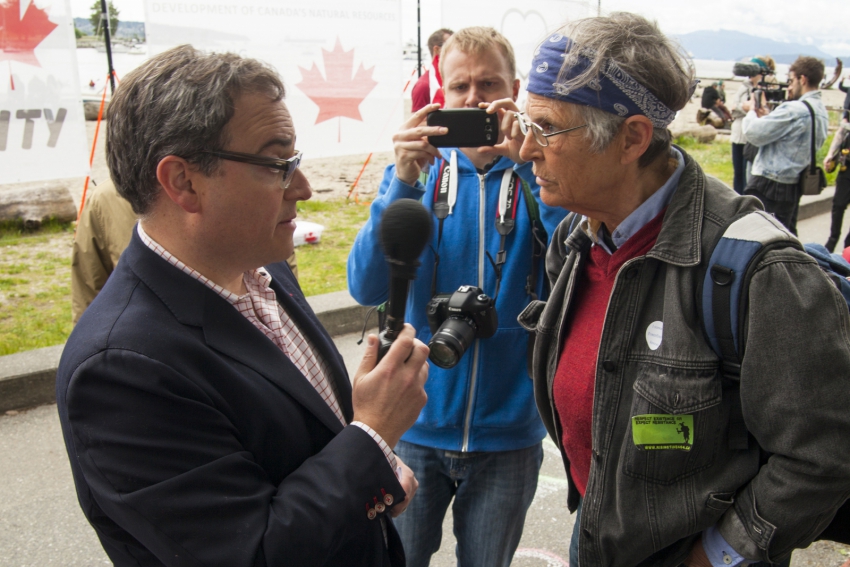 Ezra Levant having a heated debate with an environmentalist at a pipeline rally in Vancouver in 2014. Photo by Mychaylo Prystupa.

Ezra Levant, David Akin and other "straight talk" conservative commentators and journalists with the controversial Sun News Network will soon be looking for work. The network confirmed Friday it will go off the airwaves, after its failure to establish the programming as a viable news channel in Canada.

A journalist with Sun News in Toronto said Thursday that employees are stunned.

"Management has not told us anything on this entire journey of uncertainty. We've not been kept in any communication," said the employee in the Toronto news room, who wanted to remain anonymous.

The Sun News source said the network was "run by insiders who did not know a thing about television."

Dubbed as 'Fox News of the North' at its launch in 2011, the network was criticized for having cozy links to Harper Conservatives. Once on air, it suffered from a number of high-profile blunders.

In 2012, the network was outed by the Canadian Press for putting on a fake citizenship immigration swearing-in ceremony, where federal immigration employees were recruited to pretend to be immigrants. Conservative Minister Jason Kenney was forced to apologize.

In another incident, former Sun TV host Krista Erickson did an unusually combative interview with dancer Margie Gillis about her funding. The infamous incident resulted in more than 4,000 complaints to the Canadian Broadcast Standards Council.

The provocative approach apparently failed to bring enough audiences to Sun News to keep it viable. Its owner, Quebecor, had reportedly been looking for an owner for the TV network for some time.

"This is an unfortunate outcome; shutting down Sun News was certainly not our goal," said Julie Tremblay, CEO of Sun Media Corporation in a statement Friday.

"The closure is regrettable for the Canadian broadcasting system, which is losing a distinctively Canadian voice in the national news space, and also, most importantly, for all the Sun News employees who are losing their jobs," concluded Tremblay.

Sun News Network employs some 200 journalists, with the majority in the Toronto area. It also operated small bureaus with reporters in Vancouver, Calgary, Winnipeg and Ottawa.

One of its prime-time TV shows was "The Source" by Ethical Oil author and conservative commentator Ezra Levant.

The TV host caused a stir in Vancouver last summer when he attended an anti-Enbridge-pipeline rally, provoking environmentalists with questions about how they consume oil.

“I just think you’re a bunch of morally preening, self-righteous, luxurious, rich white kids,”  Levant proclaimed to an agitated group of pipeline protesters that surrounded him.

Vancouver Observer recorded a video about one of those heated exchanges:

The Network operated seven days a week with about 12 hours a day of programming Monday to Friday, with less on the weekend.