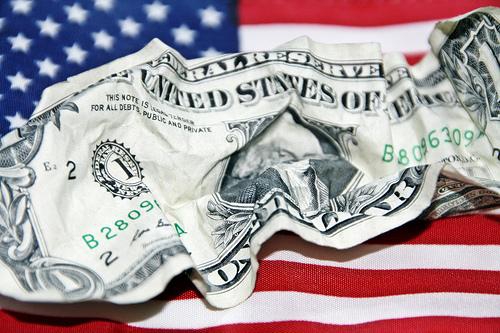 Photo by TaxBrackets.org via Creative Commons

Jacobson praised U.S.-Canada trade relations and its long history, but offered no specifics as to what the Canadian economic ramifications would be to the American protectionist provisions.

OTTAWA - The U.S. ambassador to Canada defended the controversial Buy American provisions in his president's new jobs bill Tuesday, saying it's good for the economic recovery of both countries.

Envoy David Jacobson told an audience of hundreds that President Barack Obama's $447-billion jobs legislation will get the U.S. economy back on track, and Canada's with it.

Jacobson told a business crowd in Ottawa the provision is necessary if Obama's bill has any chance of passage through a fractious U.S. Congress.

"In case some of you haven't noticed, it is not very easy for the president to get his agenda through Congress. And so he had to make a tough call. He had to try to introduce a bill that had some chance of passing. Hence the Buy America provisions,'' Jacobson said.

"If the bill doesn't pass, the United States economy, and in fact the economy of Canada along with it, is going to suffer.''

Jacobson said Canada should "take the bad with the good'' and that his country will live up to its international trade obligations.

It was Jacobson's most hard-hitting public message since becoming Obama's envoy to Canada. He had little choice but to address the protectionist irritant, which has sparked complaints from the Conservative government in Ottawa.

The protectionist provisions were resurrected last month as Canada and the U.S. were prepared to officially announce a sweeping agreement on border co-operation that will see Canada spend $1 billion for new border facilities and programs.

As it did when a similar provision was introduced in Obama's previous stimulus bill, Ottawa has protested the inclusion of the provision and is seeking another exemption.

"It's disappointing to see when new trade barriers are erected,'' Ed Fast said on a trip to Washington.

"At the same time, we need to place those in perspective and understand that it's absolutely critical for us as a federal government ... to focus on removing trade barriers.''

Jacobson exhorted his audience to look at the bigger picture of the Canada-U.S. trading relationship, the largest in the history of the world.

Two-way trade between the two countries hit $526 billion last year, he says, or more than $1 million a minute.

The Buy American provisions are only a small part of the bill dealing with infrastructure repairs and the rebuilding of schools, he said. Most of the those expenditures would be for land and labour, which is not something that Canada could supply any way.

Jacobson also moved to reassure his audience the jobs bill ensures the Buy American provisions will conform to the U.S. government's trade obligations under the World Trade Organization and the North American Free Trade Agreement.

"No two countries on earth have a better track record of working together to try to resolve trade differences than the United States and Canada,'' the ambassador said to muted applause.

Jacobson had to address another controversy, a decision by the Federal Maritime Commission to hold an inquiry following complaints from American ports that Canada is unfairly subsidizing the diversion of cargo ships away from its U.S. competitors.

Jacobson said he was personally assured by Richard Lidinsky, chairman of the commission, that he was "categorically'' not contemplating any levies or tariffs on Canada.

"If that, somehow, changes, I promise that I'll personally come back here to the Canadian Club, with egg on my face, and explain how I got it wrong.''

Jacobson offered no details on when Canada and the U.S. would sign their perimeter security pact, which was announced by the leaders of both countries with great fanfare in February.

The Prime Minister's Office has not been able to persuade the White House to hold a joint event announcing the pact with Harper and Obama.

The U.S. sees the deal as more of an incremental development than a landmark agreement and therefore doesn't see the need to have Obama appear in public for a splashy announcement, sources say.

Jacobson denied there was any major delay in announcing the Beyond the Border deal.

"This is an issue that's going to benefit the American people and the Canadian people for generations. If it takes us an extra couple of weeks to get it right, I think that's well worth the time.''

The deal, as described to The Canadian Press by several sources, will bolster information sharing on security threats, better align the countries' food and auto industries, and ensure consultation on land-border crossings.