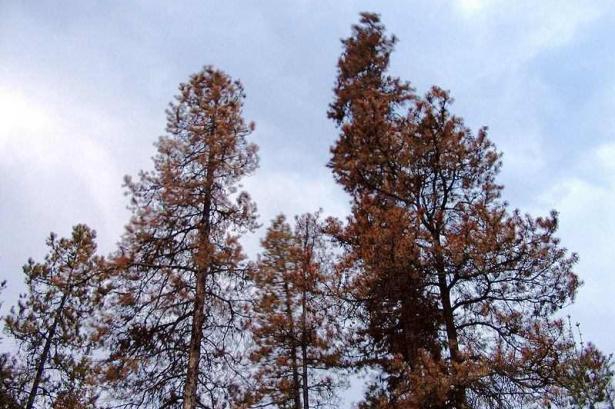 There's more drama brewing on the softwood lumber front as the U.S. prepares to file a claim against B.C. that says the province is subsidizing wood damaged by the mountain pine beetle -- and giving B.C. mills an unfair advantage in softwood lumber sales.

MONTREAL -- The United States is expected to seek billions of dollars in penalties Tuesday when it files its case to back a claim that British Columbia is subsidizing wood damaged by the mountain pine beetle.

The U.S. Trade Representative is slated to present a brief to the London Court of International Arbitration seven months after it alleged that British Columbia was breaking the 2006 softwood lumber agreement by selling the province's timber at artificially low prices.

In January, it filed a complaint after consultations last fall failed to result in a resolution.

The U.S. accused the provincial government of "dramatically'' increasing the amount of beetle-infested timber it was selling at the cut-rate price of 25 cents a cubic metre.

The price hike has given B.C. mills an unfair advantage in softwood sales, said the complaint.

The full U.S. brief may not be immediately made public on Tuesday.

But the penalty request containing a "fabricated number'' should be disclosed to draw attention, says John Allan, president of the B.C. Lumber Trade Council, which represents the province's lumber producers.

"We'll see the guts of their argument tomorrow,'' he said in an interview from Vancouver.

"We think we've got an excellent defence, but it is a challenge and I do expect the U.S. to be looking for a reasonably high number in terms of damages.''

A U.S. trade publication last week suggested the Americans could seek a penalty of up to US$4 billion.

It said U.S. and Canadian officials met last month to discuss a two-year extension to the 2006 softwood lumber agreement that is set to expire in October 2013.

The extra time would give the United States more time to collect the added duties on B.C. lumber exports.

The final award, should Canada lose, could be substantially lower. The Americans won a $60 million penalty earlier in the year despite seeking a $2 billion penalty.

Allan said he's confident that Canada will prevail this time, in part because the market system to sell beetle-infected wood is grandfathered in the 2006 softwood lumber agreement.

The province also had to act to draw value from the dried up wood and the timber pricing system governing harvesting is market based, he added.

Allan said the U.S. challenge is the most serious of the softwood lumber agreement to date.

"This one is more fundamental. It's an attack on forest policy and timber pricing, so that's why it's really critical.''

Canada will have until November to respond. An oral hearing is scheduled for Feb. 27 in Washington, D.C.

A final ruling by the three-member panel of European lawyers is expected by fall.

Canada has said it believes the U.S. case was based on "unfounded allegations.''

British Columbia also denied the province was cheating, saying American producers should have known there would be an effort to clear dead, beetle-infested timber.

The U.S. acknowledges some timber has been damaged by the pine beetle, but said the amount classified by B.C. as "grade 4,'' or cut-rate, can't be justified.

The independent process is in the beginning stages, said Mike Mueller, a spokesman for International Trade Minister Ed Fast.

"The Softwood Lumber Agreement has a dispute settlement process and we will review the statement of case when filed,'' he said in an email.

The United States has won its two previous complaints before the London Court involving wood shipments from Ontario and Quebec. A 10 per cent additional duty on exports was lifted the end of June.

One of those claim had also been filed against Western producers, but that claim was unsuccessful.

However, aside from a two-month period last year -- when the export tax slipped to zero and 10 per cent -- wood from B.C. and Alberta has been taxed at the 15 per cent maximum every month since October 2006.

Increased lumber shipments to China and other parts of Asia has helped to mitigate weak demand from the United States because of low housing starts.

China has overtaken the U.S. as the largest buyer of B.C. lumber.

But Allan said he doesn't foresee China replacing U.S. as Canada's best customer because much of the product shipped to Asia is low quality wood used for concrete forming, not housing construction.