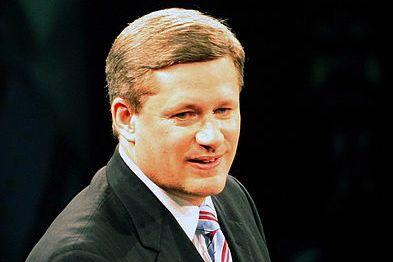 As Canadians watch the fiscal drama unfold south of the border, Prime Minister Stephen Harper has stepped in to assure them that the situation there is "very bad", but better in Canada.

Canadian Press has the story.

BRAMPTON, Ont. -- It should come as no surprise the United States is having a hard time dealing with a mammoth debt crisis that is threatening to push the world's largest economy over the fiscal edge, Prime Minister Stephen Harper said Wednesday.

At the same time, Harper said, Ottawa was confident the government of U.S. President Barack Obama would find a way to deal with the situation and avert an economic disaster.

"Part of the reason that the Americans are having such trouble dealing with this is that the U.S. debt and fiscal situation is extremely difficult,'' Harper said.

The U.S. government has been grappling since May with more than $14 trillion in debt -- the borrowing ceiling set by Congress -- and may not be able to pay its bills after Aug. 2.

That means Washington could be forced to cut its spending by almost half, threatening social security benefits, defence outlays, or even civil servant wages.

One possibility is for Congress to legislate a higher borrowing limit, but that would do little to address the underlying problem of the government living far beyond its means.

The mega-debt problem could cost the U.S. its top-level credit rating, further exacerbating the situation and threatening the still fragile global economy.

If the U.S. Treasury was unable to redeem or pay interest on outstanding government bonds, the country would effectively be in default.

Despite the enormous magnitude of the crisis, Congress has been deadlocked over how to deal with the situation, given choices that involve taking on even more debt, raising taxes or making deep cuts in spending.

Speaking after a Korean War memorial ceremony, Harper said the American political process for tackling the problem is "difficult'' at the best of times.

He called the situation in Canada "significantly'' better than that south of the border but said the government in Ottawa would remain vigilant and act as needed to mitigate any spillover effects.

"This government is committed to taking the necessary actions, some difficult actions, over the next couple of years to ensure that we stay on track, that we balance our budget and we don't see anything like the kind of situation that we have in the United States,'' Harper said.

Canada will suffer if US defaults on debt