The comic absurdity of the NHL lockout has reached new heights. If you still have the stomach for it, consider the following line of argument as it bleeds on into the future.

Throughout this entire process the owners have been attacking existing player salaries, contract lengths, negotiating rights, and representation — all of which, they say, are contributing to an unhealthy imbalance of league revenues. A correction is required; the players have too much power in this equation, it’s time to loosen the Associations grip.

So imagine the NHL’s overwhelming joy when the NHLPA began voting over the possibility of filing a disclaimer of interest, which would essentially dissolve their union and make every component and premise of a CBA illegal. No revenue-fluctuating cap, no term limits, no draft, no entry level contracts, no anything. Just every player for himself and at the mercy of 30 NHL owners who are unanimously committed to reigning in spending and putting a stop to absurd contracts.

It’s the perfect win for the owners: NHLPA self-immolation, a blank slate where owners can pay out as much or as little as they want on whatever terms they desire.

Only the owners are, of course, fighting against it — filing a pre-emptive class action lawsuit in an attempt to stop the NHLPA from dissolving.

Because this is a farce of the highest order.

If the union dissolves, warns the NHL in its lawsuit, then all existing contracts will be voided and every player will be a free agent. The players know this, of course. The process of filing a disclaimer or pursuing union decertification is a pressure tactic to elicit new levels of negotiation and compromise.

But this surface-resistance by the owners to fully and completely assume total control over league spending and revenues in a union-less landscape is the clearest example yet of its own self-loathing and distrust.

In order to avoid catastrophic collusion lawsuits, preventing runaway salaries and broken league financials in a landscape without a CBA would hinge completely on owners and general managers exercising reason and restraint when it comes to signing free agents. No hard and fast rules on limits, but no 13-year 100-million dollar contracts or signing players into their mid-forties either.

A union-less and CBA-less NHL landscape where every player is an unrestricted free agent is the owners worst fears realized, because they know they can't help themselves.

High-end player salaries would circle the moon and the discrepancy between weak-market teams and the ones bathing in cash would provide an interesting blurring-of-the-line between AHL and NHL product.

We know it to be true because history is a good teacher.

It’s NHL owners who sign off on absurd contracts and NHL general managers who concoct hilarious cap-circumventions. It’s the NHL as a whole which pours its cherished collective revenue money into financial sink-holes like Columbus and Florida and Tampa Bay and it’s Gary Bettman’s NHL which has stuck to its guns in Phoenix and adopted the “that iceberg can’t sink us” mantra — which speaks only of delusion and not some bizarre, noble commitment to fans there.

NHL owners can’t be left unsupervised and they know it.

So the players have to take the fall and Nanny-up.

Their full ‘defeat’ as a union and full negotiating freedom as individuals won’t do because the owners will go crazy and spend their way into a financial stupor.

The owners know this.

The CBA they’ve all left behind also won’t do because the owners will find a way to break the spirit of their own rules and spend their way back into a sloppy and uneven growth-rate, with both ends of the franchise spectrum growing further and further apart.

The owners know this too.

So there’s only one conclusion left: Because the owners need constant care and attention, the players have to allow for the CBA and themselves to be fool-proofed, otherwise the owners will hurt themselves and everyone else by extension.

This is the NHL argument in all its high-minded glory.

The horrible, nearly incomprehensible twist of it all is that it's entirely accurate and unavoidable.

In the end, that's what this lockout boils down to: creating a "CBA for Dummies" that foolproofs the system against mindless whimsy and lust.

It's not the players fault, and it's certainly not the fans fault, but both groups will pay for it all nonetheless. 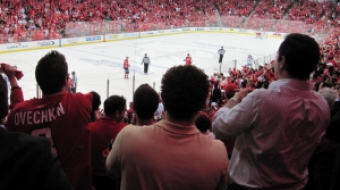 The NHL leadership is after only one kind of agreement: one that involves the NHLPA begging on its hands and its knees.
Alan O'SullivanNov 3rd, 2012

Nothing to Fehr? Glimmers of hope despite NHL lockout setback

Will the parties in the NHL dispute conclude that sharing a 3.3 billion-dollar pie is better than letting it maggot-laden mush?
Alan O'SullivanOct 19th, 2012
Speak up about this article on Facebook or Twitter. Do this by liking Vancouver Observer on Facebook or following us @Vanobserver on Twitter. We'd love to hear from you.

Nothing to Fehr? Glimmers of hope despite NHL lockout setback