Making fundraising the easy part of Climbing for a Cause 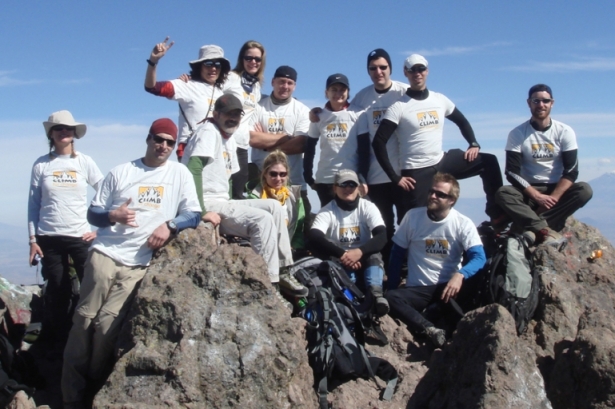 Before anyone muttered the phrase “online crowdfunding,” there were walk-a-thons. Since the March of Dimes put together its first WalkAmerica event in 1970, the methods for raising money for charity while exerting extreme physical effort have continued to evolve, reaching new peaks recently with Canada’s newest site for online fundraising, Climb for Change.

Admit it – you’ve probably been hit up more than once by a friend, maybe even someone who’s not terribly athletic, who’s training to climb a mountain, run a marathon, or cycle some ridiculously long distance to fill the coffers of a cause near and dear to their heart. It’s a great tactic, and it works. Each year, tens of millions of North Americans ask friends to support them in these events, and millions of dollars are raised.

If you register for this type of event, it’s possible you’ll get some support with your physical training. Whether or not you do, you’ll definitely get your own semi-generic webpage to help you with your fundraising goal (the rising thermometer), making it as simple as possible for you to get your friends and family to donate so you’ll meet the minimum fundraising goal set by the organizing nonprofit, generally in the $2,500 range or higher.

But for the rugged individualist who wants to undertake a fundraising climb on his or her own, soliciting that level of donations can almost be a bigger mountain to overcome than the physical event itself. Chantal and Mike Schauch, a Vancouver couple who have experience leading their own charity climbs, found this out the hard way. In 2010 and 2011, they and their team members reached the summits of Kilimanjaro and Pico de Orizaba, raising over $200,000 for a local charity, but “we spent way too much time and resources developing and maintaining our campaign sites, let alone finding the right solution in the first place,” says Mike Schauch.

In their case, the Schauchs’ background in marketing and fundraising certainly came in handy, but they recognized that most people who want to fundraise while on their own adventures aren’t equipped with these skills. They saw they had an opportunity to help their fellow charity climbers and adventurers who, like them, had an urge to help others while on the move.

In 2010, the Schauchs founded their social venture, Climb for Change, an online hub connecting thousands of charity climbers, trekkers and hikers around the world, providing a place to share stories and experiences while accessing campaign resources and tools. To make the site even more useful to its community, Climb for Change just launched its own online fundraising platform, specifically developed for charity climbs and other charity adventure challenges.

“People want to have their own story and brand represented on their campaign site,” says Chantal Schauch. “They want more than the simple mass market fundraising pages and don’t have the time or money to spend on a custom fundraising website.” The site makes it easy and engaging – not to mention free – for people who aren’t professional fundraisers or web designers to create a customized professional-looking fundraising site, far beyond the plain old page with the rising thermometer on it.

From local walk-a-thons to climbing the highest peaks in the world, people will always stretch themselves for a good cause. And while there are endless physical challenges for those with the urge, thanks to Climb for Change, at least the hurdle of fundraising while training is now a bit easier.