On Dunlevy and Alexander, pop into the gorgeous warehouse space that's home to Vancouver Urban Winery. This place doesn't actually make wine, but it's where all the wine on tap in Vancouver comes from: they transition it from barrel to keg, and they're heavy on Okanagan wines. The reason you'll visit, though, is for the tasting flights and charcuterie plates. In other news, yes, there's wine on tap in Vancouver. 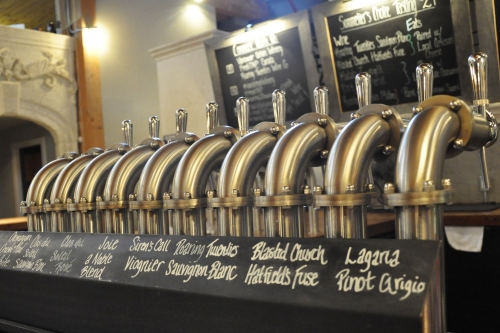 Scope out the local arts scene along Railway St., beginning with Railtown Studios  From there, you'll find everything from furniture to industrial design as you pick your way toward Aritzia's headquarters where Railway hits Alexander. On the way, make sure to stop in on a local legend. You've seen them on the mountain, now see where they're born: Endeavour Snowboards. A Railtown resident for two and a half years, Endeavour moved here from Gastown to find more space for their design office and Archetype Snowboard lab. Stop by and politely ask if you can see some mad science.

What makes Railtown unique is its texture. The neighbourhood has a genuine city-of-industry feel to it. Even the green spaces are watched by giant cranes, looking like steel dinosaurs looming out of the fog on a cold morning. Street art is also popping up; so look left, look right, and look up. 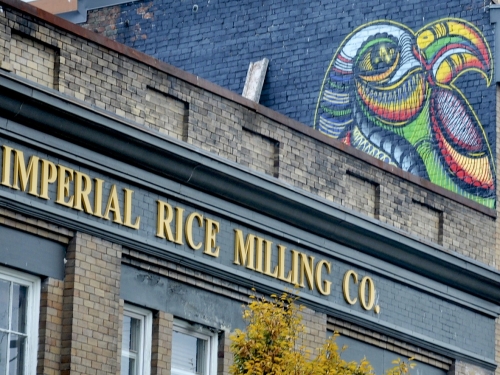 CRAB Park boasts a massive lawn and children's playground. "CRAB" stands for Create a Real Available Beach; the full name of the park is "CRAB Park at Portside", but you don't have to say the whole thing. Eshpeter is a fan of walking meetings to and from CRAB Park. Beats staring at the wall in a conference room.

As Main Street becomes the bridge to CRAB Park, turn west and check out the view of Vancouver's skyline.

Then look east to see the massive cranes working under the watchful eyes of the bridge's cement dragons. Eshpeter and Kolke agreed that Railtown's proximity to the port reminds its new creative industries that they are all part of the same dynamic: where Vancouver connects with the rest of the world. 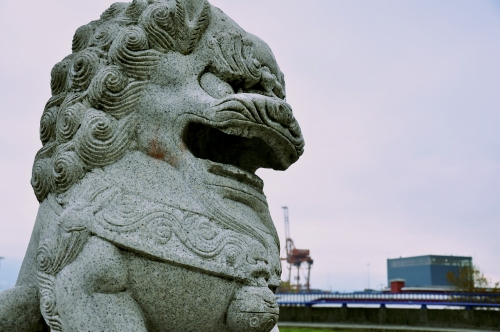 Transit  *** (out of 5)
Railtown is easily accessed by bus, either along Powell, Cordova, or Main (4, 7, 209, 210, 211, 214). However, you'll still have to do the last block or so on foot.
Parking **
Street parking is snapped up early by those who work here. You're either stuck with paid parking lots, or stashing your car further east. Trying to park in Gastown is just silly.
Culture  ****
Bring your friends to Railtown if they're visiting from a metropolis. Visit for a photo shoot. Come for the food and drink. Railtown is at a crucial stage in its history. Be a part of it.
Street noise *
Railtown is surprisingly quiet, considering it's bordered by the DTES and a shipping yard.
Bikability *****
There's very little traffic through Railtown, so cycling is a breeze. You can also play Spot the Fixie.
Kid-friendliness *
Only CRAB Park would really hold a small child's attention. Overall, this is pretty much a grownups' neighbourhood.

Are you the undisputed king or queen of your neighbourhood? Do you know your block like the back of your hand? Prove it! Show us your favorite spots and help us prove that Vancouver isn't just about chain stores, interchangeable sports bars, and generic family-style restaurants.