Why can you never find a Car2go in Vancouver when you need one? Watch this video to see where all the Smart Cars go. 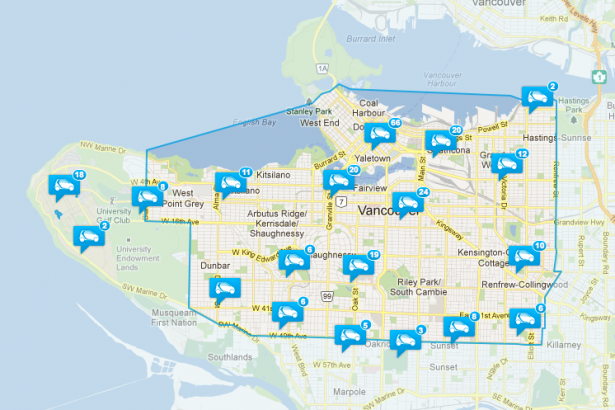 March of the Smart Cars: Tracking Car2Go in Vancouver

Car2Go brought "private public transportation" to Vancouver in 2011, and has been attracting adherents ever since. The tiny, easy-to-park Smart Cars have woven themselves into the daily lives of Vancouverites.

However, residents of certain neighborhoods (Kitsilano, for example) will notice that there never seems to be a Car2Go vehicle nearby when it is needed most.

This isn't due to bad luck, but an indicator of citywide commute habits. The video below will explain the phenomenon.

Redditor qviri used the Car2Go API and openstreetmap to chart the movement of Car2Gos Vancouver fleet from February 8, 2013 and into the wee hours of February 9. Each vehicle's transponder relayed its position throughout the day and night, which could then be overlaid upon a map of Vancouver. The result is illuminating.

You will see that residential neighborhoods start out with a healthy number of Car2Go vehicles overnight, and then see them off in the morning as users commute to work. The Smart Cars then shuffle around downtown before migrate back to the inner suburbs in the evening.

Notice how quickly the Car2go vehicles bounce around the downtown area. Also, notice that small cluster of Smart Cars near 41st and Kingsway: locals seem to be finding the Skytrain an easier commute option.

The longest journeys are to and from the UBC campus. As Car2Go charges drivers by the minute and Vancouver's traffic lights are not timed, the commute from East Van and Fairview to UBC and back are clearly where the money is for the Daimler Benz-owned car-share company.

Would adding more Car2Go parking spots throughout the UBC campus drive more traffic to the West Side? In theory, yes. In practice, there's no guarantee that UBC-bound students are tapping those Smart Car windscreens in the morning.

Everyone drives to The Drive. Main Street and Commercial Drive are key destinations in the evening. A look at the distribution of Car2Go vehicles at roughly 9pm will show you where the action is.

When you have to be on time to meet friends and family for an evening out, a car is faster and more reliable than the bus; and, if you have a drink or two, you can take a cab or public transportation back home.

Conversely, you can look at the empty areas on the map during the evening hours to get a good idea of where Vancouver's most nightlife-deficient neighborhoods can be found.

If you've ever spotted what looks like an idle herd of Car2Go vehicles lounging in the upper levels of the EasyPark on Water Street, those Smart Cars are out of service. They are either suffering mechanical maladies or networking malfunctions.

Would re-deploying these vehicles more quickly alleviate the no-Car2go-in-Kits conundrum? Only if the newly-repaired vehicles outnumber the Smart Car-needy drivers.

Would you like to do more with this sort of information? Here is a link to Car2go's API.