4/20 Day in Vancouver as USA bogarts BC Bud tourism

As US gets more weed-friendly, will Vancouver lose its stoner-friendly reputation? 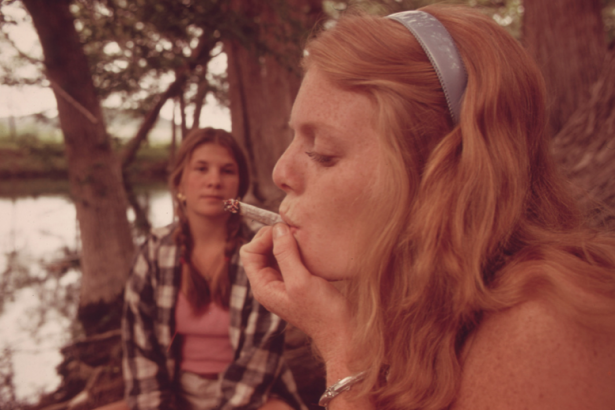 One Girl Smokes Pot While Her Friend Watches During an Outing in Cedar Woods near Leakey, Texas. Image by Marc St. Gil, US National Archives via Flickr Commons.

April 20 carries a special significance for marijuana smokers, or for those who champion the decriminalization or legalization of weed. After all, BC Bud is arguably the province's biggest export.

Folks from across the city, throughout the Lower Mainland, and, indeed, from around the world gather at the Vancouver Art Gallery as the space transforms into Canada's only open-air marijuana farmer's market. Sure, cops are there, but they don't do anything unless someone gets violent.

Vancouver is no longer alone in North America when it comes to lighting a spliff in public on 4/20. Washington and Colorado have recently legalized small amounts of marijuana for personal use, and so are becoming friendlier towards public 4/20 celebrations. (Several other US states have already decriminalized cannabis to varying degrees; Vermont is poised to become the latest. On a federal level, though, Cannabis remains a Schedule I narcotic, on par with heroin and LSD.)

Seattle, just across the border from Vancouver, even features Gandalf on its marijuana law-enforcement page. Seattle is hosting DOPE Magazine's second-annual DOPE Cup on 4/20.

Denver is hosting the first-ever Cannabis Cup on American soil. Mile high city, indeed. It's no joke: up to 50,000 people are expected to show up in Denver for 4/20 this year. That number includes tourists, tourists who may otherwise have come up to Vancouver.

Decriminalization legislation: Pass it, pass it

Washington's and Colorado's moves to decriminalize marijuana grabbed headlines in the United States, which still clings to its War-on-Drugs mindset. In reality, though, Seattle and Denver are only moving closer in policy to what we already have in Vancouver: smoking weed is not legal in public, and one can only possess pot with a prescription. However, cops will tend to look the other way.

As suggested in the Seattle PD link above, Seattle's cops have explicitly said that marijuana law enforcement has been kicked to the bottom of its priority list. Well, for the most part:

SPD seized a bunch of my marijuana before I-502 passed. Can I have it back?