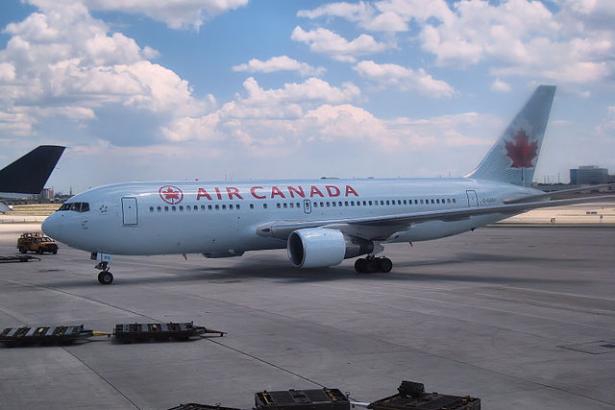 Air Canada employees are threatening to strike again for the second time this year.

The tension between airline and union intensified today with the rejection of September's tentative contract deal.

MONTREAL - Air Canada appears to be headed towards its second strike this year, despite the threat of government intervention.

Members of Parliament would have to be recalled from a break to pass any back-to-work legislation, but even if they were, House of Commons rules would prevent any law from being passed until after the start of the threatened strike by 6,800 flight attendants.

"Most likely, just given the timing, there will probably be a short strike,'' Karl Moore, a professor at McGill University's Desautels Faculty of Management, said Tuesday.

The attendants, represented by the Canadian Union of Public Employees, rejected a deal on the weekend that had been negotiated by the union. They have given notice for a strike to begin early Thursday morning.

A strike lasting a couple of days would cause disruptions to about one-third of Air Canada's (TSX:AC.B) passengers, said Robert Kokonis, president of airline consulting firm AirTrav Inc.

The country's largest airline has said it will operate a partial schedule with the help of Star Alliance partners, managers and Air Canada Express flights operated by Jazz and Sky Regional Airlines.

Kokonis said two-thirds of passengers, particularly business travellers and some leisure ticket holders, would need to rebook flights or use the reduced service.

Those most likely to be affected by a strike would be passengers flying to more remote destinations, he said.

But Kokonis fears the biggest threat to Air Canada is that its brand will be tarnished by the labour disputes, affecting its forward bookings. Weary passengers could switch to alternative airlines, fearful that the flight attendant strike will not be quickly resolved or that future negotiations with pilots and mechanics could break down.

The flight attendants had also rejected an earlier tentative deal CUPE negotiated with the airline in August, forcing both sides back to the drawing board.

A second rejection has left the airline questioning the legitimacy of the union's representation.

With this backdrop, it's believed that a new negotiated deal is unlikely.

George Smith, currently a fellow at Queen's University's School of Policy Studies, said the union is likely looking at arbitration as its best chance to oppose the airline's efforts to reduce costs and possibly launch a low-cost carrier.

"I think they think that they can do better in arbitration than they can do in negotiations,'' he said, adding they also wouldn't lose much pay.

Recent arbitration cases involving Air Canada customer service agents and Canada Post workers have required arbitrators to choose either the union's or the employer's position. That leads arbitrators to favour gradualism rather than hand either side a major victory.

For example, the recent arbitration ruling granting the union's proposal for a hybrid pension plan for new customer service hires has prevented Air Canada from achieving its objectives, Smith said in an interview.

Federal Labour Minister Lisa Raitt has threatened back to work legislation if there is a strike, saying a work stoppage at Canada's largest airline would be "unacceptable.''

Raitt said Monday that if the two sides are unable to come to a solution, the government is "prepared to act to protect Canada's fragile economy.''

Benoit Poirier of Desjardins Capital Markets said a strike by Air Canada flight attendants is "slightly positive'' for Transat (TSX:TRZ.B) since it reduces the potential threat of low-cost carrier despite the threat of government intervention.

"We believe Air Canada will have a tough time launching a low-cost airline as envisioned, given the outcry from its employees against management and union leaders,'' he wrote in a report.

Air Canada's discount carrier would compete against Transat and others on transatlantic, Caribbean and Mexican low-cost leisure routes.

On the Toronto Stock Exchange, Air Canada's shares lost three cents, or 2.1 per cent, at $1.38 in midday trading.