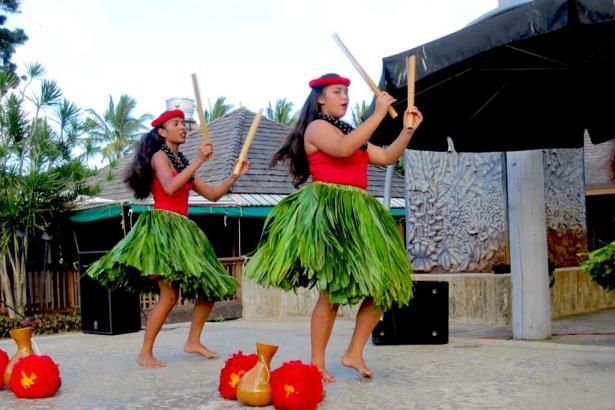 Our five-hour, non-stop flight was manageable. Well, as manageable as flights can be with two tots. During the flight, we dreamed of stretches of Kaua'i's pale beaches and emerald waters that the postcards on our fridge door promised us.

Our itinerary involved two major stops – one close to Lihue in Kapaa and one further up north in Princeville. Distances were short on this garden island and it was possible to tour it all in under half a day.

After landing in Lihue, my family made its way to the east shore, to the quiet village of Kapaa. With condo communities and expensive beachside mansions, bought as second and third homes by American retirees and the rich alike, there was no shortage of places to stay.

One-room studios with basic amenities rent at a minimum of $100 a night with prices running into the upper thousands for beach side mansions. Vacation Rental by Owner is filled with options for short to longer-term stays and prices ranging from the affordable to exorbitant.

Like all the Hawaiian islands, Kaua'i was expensive. So while Walmart and Costco might not be must-visit spots while on vacation, they were good places to pick up groceries and snorkel gear at reasonable prices.

Armed with the basics and after resting briefly at our guest house in Kapa'a, we headed over to Anahola Beach Park. The beach was great for surfing, and was a wonderful place for picnicking while marvelling at the awesome churning waves and the colourful surfers attached to them.

Then, it was off to the Kapa'a Beach Park, another nearby beach with nice stretches of sand. Canoes rides passed on the navigable Wailua river.

Two beautiful waterfalls emerged from the river: the Opeka'a and Wailua Falls.

With two small boys, whose gleeful thoughts dwelt on how to give us the slip and jump into the water, we had to content ourselves with watching people canoe the calm waters before we made our way to the huge family friendly Lydgate Park with a bonus: a large playground.

There, we watched the daredevils surf the wild waters of Anahola Beach while snorklers occupied the shallow end. We felt positively middle-aged enjoying this park. We made sure to come back on more than one occasion.

Near Kapa'a, we stopped at Kauai's only Hindu temple and monastery. I felt serene and calm to be so close to its natural and constructed beauty.

This most beautiful of spots has been the site of a Shiva temple since 1973. Pujas are held every morning at nine and visitors can behold Shiva, in the glorious form of the dancing Nataraja and a crystal Sivalinga in the main sanctum. Black granite murtis of Lord Shiva's sons Ganesha and Karttikeya are installed in two large side shrines.

Black granite murtis of Lord Shiva's sons Ganesha and Karttikeya are installed in two large side shrines. Outside of the temple are statues of Brahama and Ganesha hidden among the cascading adventitious roots of an immense banyan tree.

Walking the grounds, I felt sure that Shiva must have left his Mount Kailash abode in the Himalayas for this remote and mystical one.

Outside of the temple are statues of Brahama and Ganesha hidden among the cascading adventitious roots of an immense banyan tree. Walking the grounds, I felt sure that Shiva must have left his Mount Kailash abode in the Himalayas for this remote and mystical one. Visiting the temple gave us a glimpse of a different side of the island.

Another less touristy activity was picking tasty fruit and vegetables at local farmers’ markets. One is held almost every day of the week in different parts of the island and it's a wonderful way to see locals and buy local produce.

We left content, laden with sweet lychees, mangoes and stalks of birds of paradise.  For hours, dress code and tips on vegetarian dining while on the island, visit their website.

Public transportation was poor and quite "ungreen." Traffic was mild, but there was no spirit of aloha among the fellow drivers who would pulll out in front of us from hidden parking lots and side streets without so much as a wave or an apology.

But we soon grew comfortable with this etiquette and were driving like the natives within a week, mostly on the Kaumualii Highway around the perimeter of the island.