A great day in Pemberton, B.C.

After spending a great night at the Pemberton Valley Lodge, we started the day with breakfast in the small town at The Pony cafe.  The Pony didn't seem to have any competition, but it served up delicious food, nonetheless, and at reasonable prices: homemade sweet rolls, cheap eats for kids, and I ate a yummy poached egg with toast made from good bread.  As I ate, I studied a copy of The Pique, Whistler's tabloid-sized magazine jammed with interesting stories and packed with ads.  The Pique was pushing its new Mac app.

From there, we headed North towards Mount Currie and headed down to Lillooet Lake, on the recommendation of a local who suggested we head to Strawberry Point.    A desolate dirt road cuts down to the blue-green lake, passing a pounding stream of the same colour over a washboard bumpy road.  The dramatic lake surrounded by rugged mountains took my breath away, despite the fact that I'd been there before.  The boys were not impressed by the long ride and the fact that we seemed to be pushing further and further into nothingness, which is another way of saying wilderness.  Hardly.  When we turned into the road past the Strawberry Point sign, we encountered a nearly full parking lot.  We got our swimming stuff out and headed down to the lake.  Everyone we passed seemed oddly unfriendly, as if we were invading their personal space. Or, were they hiding something?

We meandered through the woods on a well-trod trail and arrived at a beach covered with logs.  Tents stood along the lake's edge indicating that the lake offers a free, gorgeous camping site.

Bikini-clad women floated on blow-up mattresses. They seemed surreal and completely out of place on the isolated lake with mountains towering above them, as if they'd drifted here from the mattress-infested Cat Lake (where I'd spent the previous weekend) without noticing they'd gotten lost.

Mosquitoes buzzed in and after slapping away ten or so, I wondered if they accounted for the glum look on the faces of the people I'd been passing on the trail.  There's nothing like armies of mosquitoes to ruin the day.   The solution seemed obvious.  I jumped int, breast-stroking across the warm surface of the lake, then diving down deeper to the icy second layer.

The adolescents grew weary of the experience before it even started while my eight-year-old and I enjoyed pushing a log back and forth to each other and delighting in the big beauty around us.

We returned to the Pony for lunch, rented some DVDs from the shop in the gas station and then I left the older boys at the hotel while my younger son and I took off to see Nairn Falls.  My favourite part of this hike is the slender trail above the gorgeous and aptly named Green River.

The Green River carves its way through a mass of granite at the foot of Mount Currie.  It picks up volume from the Soo River and Rutherford Creek on its way from Green Lake in the Whistler area.  From there, it swirls and crashes along until it reaches a fracture in the granite.  Suddenly, it's broad shape is transformed into a thundering column of whitewater as it drops 197 feet at Nairn Falls.

As abruptly as the theatrics begin, the river reverts to its former character and hurries on towards Lillooet Lake.  Unlike Shannon Falls or Brandywine Falls, Nairn Falls does not drop down a sheer pathway but instead boils through several frothy cauldrons.  Over the centuries, silt carried in the water has scoured out bowls in which the whitewater churns momentarily before surging to the rocks below.  Clouds of spray are jettisoned above the maelstrom in random patterns that are pleasant and hypnotic to watch.  This is one of the most (hydro) dynamic sites in the Whistler region.

That river carries special memories for me and the sweet smelling forest reminds me of each time I've been there before.

Arriving at the falls themselves was less than euphoric today, although at other times, it had seemed the climax of the lovely 1.5 k walk to get there.  It was sweltering out on the rocks, despite  explosive hydro-theatrics.  Tourists crowded into shaded corners and wandered half-stunned by the heat, but still snapping photos (myself included).

Now, I'm seated at my favourite discovery of the trip, the Black Squirrel Restaurant  tucked away between mountains  so beautiful that my older son said they look fake. (Leave it to a teen to view the mountains with skepticism.)

And here I am seated on the porch, a cool breeze blowing across the valley, sipping a Virgin Mary (I have to drive!) and watching three happy boys playing pool. 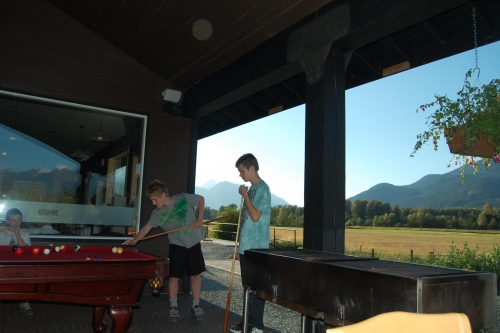 A great day in Pemberton comes to an end.  We'll drive back to Vancouver after dinner and two and a half hours later, arrive.  That's okay, I'm thinking as a flock of black birds flies over the meadow.  I'll be back.

Going to the Gulf Islands? Galiano Inn is a great place to spend a weekend