For Goodtimes, Point Southward: A Train Trip to Microbrews 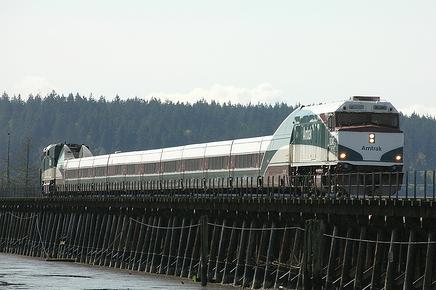 Usually when mentioning train travel in Canada you have to cue Gordon Lightfoot but as Canada has apparently forgotten that the iron road made the country and relegated train travel to a slim segment, I move my gaze to the south. While the rest of the civilized world may chuckle at the hype around the USA's long overdue plan for high speed rail, I am just happy you can take a trip southwards on a train at all I don't mind the slow rolling, but as Lou Reed explains, the waiting is a drag.

With the impending Olympix invasion, February might be a good time to hop the rails and meet your Cascadian neighbours to the south. You may likely find you have more cultural similarities than our compatriots spread across 5-1/2 time zones. Get your passport ready cause I've got your route planned out for a proper visit - and each stop involves beer from Bellingham to Portand (or even Eugene).

The problem with the train isn't speed - it's timeliness and reliability - both of which hinder your ability for a successful and efficient diplomatic mission. Customs delays, mudslides derailments, waiting at sidings, labourious boarding check in, and a secondary immigration clearing mean you can't rely on traveling by train for anything *important* but there is reason to hope and rejoice. The reason is there are now two trains a day. Used to be one train with a bunch of "train buses" - which is Amtrak way of saying a fckin Trailways bus. I rode it many times with baffled tourists who dreamed of rolling the coast starlight gazing at the brilliant Puget Sound on, you know, a train - not a bus. Quite different indeed.

The second train was hard fought as the Canadian Customs held out for $10k for clearing each train. Seems at odds with encouraging a sustainable, tourism-based economy but I digress ... Since about half of you are probably charting course to get outta town during this arts, sports culture consumer jamboree imminently approaching so I've plotted some ideas to where to go, and how to do it - you just hafta figure out how to get to Main St. station by 6 am, (which is of course, basically impossible if you live across a bridge or tunnel) so set your alarm for 5am and talk someone into driving you ~ a great way to start a trip indeed.