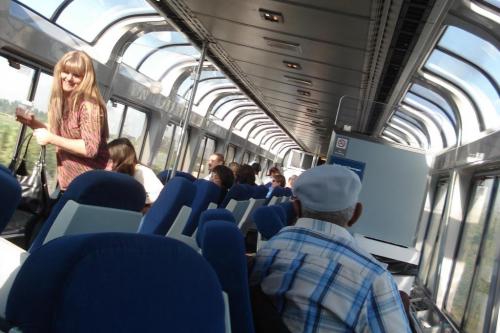 I jumped into the front seat of a yellow cab soon around 4:30 am in the damp pitch black of the Vancouver fall, in such a hurry that I’d reached the Pacific Central station before realizing with a muttered curse that I’d forgotten my jacket.

It was still dark when the coach pulled away down Main Street an hour later and headed down Highway 99 towards the American border, with your correspondent now in a grouchy predawn mood having only gotten about two hours of sleep.  That’s how my 1000-mile train-ride to San Francisco began.

We didn’t get much time to hang around in Seattle as the Coast Starlight pulled out of Union station exactly on time at 9:45 am, whisking us through a morning mist over Puget sound, which then cleared to reveal the industrial city of Tacoma and the Boeing Field King County Airport, where if you look carefully you can see a British Airways Concorde and an AWACs jet parked outside the hangers.

Sitting next to me in Coach Class was an African-American man wearing a baseball cap returning home to Sacramento after working the oil platforms up in Alaska.  If anything, he seemed even more sleep-deprived and grumpy than I was.

Yet my mood improved when I noted that Amtrak’s coach class seats had fully extendable leg rests, and much more legroom than on an aeroplane, while on the lower level of the double decker cars, one can find a snack bar and video arcades.

I however, much preferred the observation car with its wide seats and wider windows, where passengers can settle down with books or their favourite music, mingle, or just watch the world go by as the Coast Starlight trundled on through the forests and small towns of Washington State.

By now it was time for lunch in the dining car, a throwback to an earlier age when travel was glamorous and stylish, with flowers and cutlery wrapped in red napkins neatly laid on fresh linen, while your order is taken by an affable red-jacketed waiter, who was kind enough to let me have lunch free after my credit card malfunctioned.

I was joined by two Seattle natives on their way down to an amateur car race in Monterey, just south of San Francisco on the Pacific coast.

“I was in the Navy,” said one man, before enjoying an energetic discussion over burgers and sandwiches on the ethics of charging obese passengers for taking up extra seats on aircraft.

I spent most of the time after that back in the Observation car as we crossed into Oregon over the Columbia River at Portland - Mt Hood’s snow-capped peak visible in the distance - on a crystal clear afternoon. We had a half-hour layover there, not enough time to explore the leafy city.

Instead, me and my fellow passengers contented ourselves by watching the flat fields of Oregon’s Willamette valley give way to the forested slopes of the Cascades as the sun set in a pink sky.

Once again at dinner I had company, an old lady from BC heading all the way down to Los Angeles. "I work for an evangelical Christian organization,” she said, adding that she had permanent residence in the US.

On Amtrak, passengers socialise quite freely, but the etiquette is that you don’t normally exchange names, the implicit understanding being that you’ll never see each other again after the journey’s end.

I understood this code as darkness fell and I fell asleep back in my coach class seat. My seatmate returning from Alaska was still there, and we exchanged hellos before falling asleep.

The Coast Starlight ploughed on through night across the California border, a blur of broken sleep and the floodlit station platforms at Dunsmuir, Chico, and Redding. A longer stop at Sacramento, then a pink-yellow dawn over the San Joaquin Valley revealed fields parched brown by summer’s heat and tall Californian palm trees.

At breakfast the same etiquette - talk as much as you like but don’t exchange names - with a couple from Los Angeles applied once more over a breakfast of scrambled eggs and ‘grits’.

“Is this the first time you’ve tried grits?” asked the woman with dyed red hair.

“It’s a special porridge you get in the South, from Carolina,” she explained. It certainly tasted different from the Quaker Oats I enjoyed at home. No amount of sugar made it taste sweeter.

We were now approaching journey’s end, as fog from the Bay Area rolled over dry scrubby hills, and we got our first sight of the sea as we approached Emeryville Station where the connecting bus to San Francisco would pick us up.

As we drove across the Bay Bridge to San Francisco, the city’s beautiful skyline came into view under a blanket of low grey cloud. As the spires of the Trans-America Building and Coit tower drew closer as we crossed the bridge, it felt like the warm embrace of a long-lost friend.