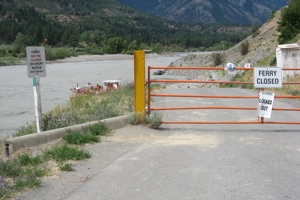 When we  left Vancouver that morning, it was rainy and cold, the first day of July. But in Lytton, it was acting exactly like summer. Everything should have been perfect.

The woman’s face wrinkled into a smile. Two long braids hung down her back.

“Is there any other way to cross the river?” my partner asked the waitress.

Dave had visited the Stein a decade earlier, but his trip had been cut short when bears ate all of the food he'd packed.

The bears had reached up and slashed the cord holding the food in the tree, harvesting the 10-day stash. Dave and company had been food free except for a few coffee beans they chewed until they packed back out.

The bears had even eaten the toothpaste.

So to prepare for this adventure, Dave bought bear repellent and "Bear Bombs," fire cracker-like ammunition.

We would shock and awe them, Dave and I joked with each other, and if that didn't work, the bears would be furious. In that case, we'd climb trees and cry.

Dave had thought of everything it seemed, except for a local ferry strike.

“Head across the rail bridge, up the road,” the waitress suggested. “That’ll put you on the other side of the Fraser and then it’s a 10 kilometer walk from there.”

“Is there any other way?” Brian asked for a second time.

“Well, you could go up to Lillooet and come down the West Side of the canyon. It’s 60 k up and 60 K down a one lane dirt road,” the smiling lady with the braids offered.

Her husband was smiling, too.

“Does anybody know you’re going into the Stein Valley,” the waitress asked, leveling a sober look at Brian and then shifting it over to me.

We swore that they did.

In fact, all our friends knew we were going into the Stein. I had sent out an email to my mother, my brother, a large number of my friends, even my friends in NY, and my employers, joking that if they didn’t hear from me on Monday, they should assume I’d been eaten by a grizzly.

When my sister-in-law invited me to watch Grizzly Man with her, I declined. A movie about a man who befriends Grizzlies and then is consumed by them didn't seem the proper preamble to the hike.

Yes, everybody knew I was going to the Stein Valley.

“Or…” the waitress said, handing Brian some change, “…you can go South to Boston Bar and cross there. I went with some friends a while back. I had a four wheel drive vehicle and got over. Their car hung a little low.” She shook her head. “Didn’t make it. You got four wheel drive?”

“Never mind then about Boston Bar.”

Then Dave said, "Tell me more about this rail bridge option.”

“Well," the waitress said and let out a long sigh. "It’s going to be 1 K from the rail bridge, just to get to the trail head."

“Some of the locals will pick you up,” the woman withe long braids offered.

Her husband laughed, showing stained teeth. He had a sun worn face that radiated good nature, as he said with relish, “If anyone comes by.”

We thanked the waitress and the customers and decided to go the rail bridge route. But we needed a few bottles of water. So Dave went into the local grocery store.

“Where’re you from? Where you gong?” the lady at the check out asked.

“That’s a long walk from the railroad bridge," she said.

“Oh, that’d be bad,” the man standing behind Brian with his partner and their toddler added.

“The ferry’s running at 2:30,” the lady behind the counter said. “That’ll be its one run of the day. You lucked out.”

The ferry was running. We'd almost been victims of one of small town Canada's worst afflictions: distorted facts.

Dave came back to the car and told me the fantastic news.

I whiled away the hour and a half wait for the ferry doing yoga and anticipating the wilderness.

The Stein Valley is one of the last untouched watersheds in the southwestern part of British Columbia. The enormous 107,191-hectare Stein Valley Nlaka'pamux Provincial Park encompasses a wilderness area known for its spectacular scenery and important historical, cultural and spiritual values. It is a user-maintained area, with 150 km of hiking trails and routes, four cable crossings, a suspension bridge and several wilderness campsites.

Stein Valley Park offers limited opportunities for easy day hikes (primarily in the lower valley) but extensive opportunities for multi-night backpacking trips over moderate to difficult terrain. With limited Ranger and Stein Valley Warden patrols, visitors must be self-sufficient and prepared for all eventualities.

The ferry operator arrived in a cowboy hat and boots. The boat could only hold two cars, but it would go back and forth until all the cars got across.

We drove on. As the ferry wobbled across the silt laden river, I thought how my kids would have loved the boat running on the current, held steady by a cable.

We landed and got off. A sign read "Stein Valley." Following it, we drove ten minutes, counting our blessings that we'd avoided a 10 K walk from the rail bridge to the trail head.

We reached the parking lot. We got out of the car and traded sandals for hiking boots.

I surveyed the mountains against the crisp blue sky, and took a deep breath of dry, fragrant air. Yellow flowers bloomed out of reddish brown sand.

The trail led down from the parking lot to sidle up against the Stein River that bellowed down the canyon in a monstrous display of what it means when a region experiences record-breaking precipitation.

Pleased to have arrived, we started down the trail.