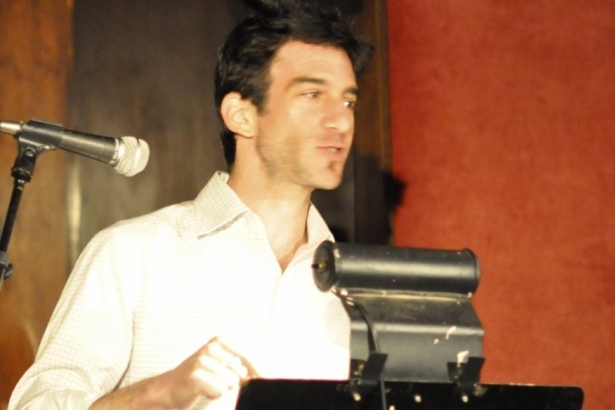 This guy says you should buy a VO membership. (Photo by Niklas Andersson)

Hey, isn't that the 'Game of Thrones' guy?

Hi, I'm Jordan, and I'm managing the Vancouver Observer's membership campaign. I trained as an actor in San Diego and London, and have been lucky enough to perform in North America and Europe. My love of storytelling led me inevitably towards writing: there's more direct control, and less waiting around in a roomful of folding chairs until someone yells, "Next!"

Upon moving to Vancouver, I joined up with NowPublic, which was at the cutting edge of eyewitness multimedia reporting. We were building Twitter listening engines before Oprah had even discovered Twitter. I worked my way up from the guy who answered bug reports to the guy who ran the site.

I recently joined the VO as a writer; I was allowed to spread my wings in terms of what I could cover, and how I could cover it. Getting to write 2,000-word articles for a web publication? Yes, please.

I took on Real-Estate writing from a human perspective, telling the stories behind the numbers and beyond the hype.

My entertainment coverage is also an act of love: I spend over four hours on each "Game of Thrones" recap, fussing over each element until it's ready to share with the show's viewers: I'm lookin' at you, Dire Wolf fans!

On the way from there to here, I witnessed seismic shifts in the news industry. Print circulation dropped, as did ad revenue: both continue their decline. Meanwhile, AP content is parroted across news outlets until one is much the same as any other.

I first came to the Vancouver Observer as a reader, just like you. The VO was where I found environmental coverage from outside the echo chamber. Stories that primarily affect one region still matter, even if the word "Kardashian" never appears.

Oh, and I hate paywalls. I really hate them. Once you agree to view a site's content through a paywall, all you end up seeing is that parroted writing. Besides, these paywalls often break down, so you end up circumventing them without even realizing it.

Right, so ads aren't a long-term solution for sustaining a vibrant news outlet, and paywalls are stupid. Do we just let great content die? Do we just let the Koch Brothers and Rupert Murdochs of this world take over?

The Vancouver Observer has found another way, and it's surprisingly old-school. We are moving towards a paid-membership model, through which we can keep up our work and indeed expand it.

Our journalism wins awards, and we want to do more of it.

The show so far

We want to get 500 new members before the end of the summer. We're also looking for partnership arrangements with local businesses.

If you're a VO reader, you'll be hearing from me over the course of the next few months as our membership campaign gathers steam, but this is a two-way conversation. I'm open to your feedback and brainstorming. This is, after all, about you. Contact me via the magic of electronic mail, or find me on Twitter.

We don't write for search engines, but for you.

The best way forward, then, is to make the Vancouver Observer yours and not "theirs".

In buying a membership to the Vancouver Observer, you're helping to keep your community informed, and information is power.

Our members get more than a pat on the back, though: they get access to our Affordable Vancouver series, as well as access to exclusive content that doesn't appear on the site.

But hey, I think you can handle it.