V-Poles: Douglas Coupland writes the future of the telephone pole 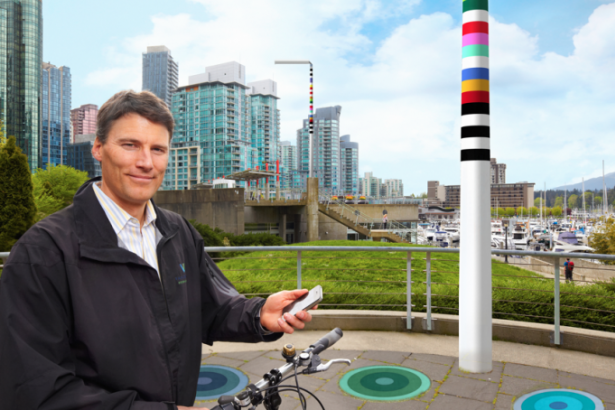 Not your grandma's telephone pole

You've seen rooftop mobile-network antennae, and probably even antennae disguised as trees. What about antennae that don't even try to hide, but seek to actually augment the urban landscape?

The V-Pole is the brainchild of writer and artist Douglas Coupland, whose 8-bit Whale at the Convention Center proves he's no stranger to public works. Coupland was exploring how an open-source wireless network could be implemented noninvasively.

The V-Pole project was unveiled in Paris last spring, and the decision to move forward with a plan to use V-Poles to expand Vancouver's wireless network was approved by the Standing Committee on Planning, transport, and the Environment yesterday.

The plan calls for 100 of these V-Poles, which could earn the City a combined total of around $125,000 per year in licensing fees paid by network service providers. No word on what these poles would cost to build and install.

This doesn't mean that V-Poles are getting stuck into your local sidewalk overnight; only that the City is serious about exploring their viability.

The V-Pole is basically the House-of-Tomorrow version of the humble utility pole, keeping in mind that the future of telephony is very data-heavy.

Besides supporting an LED streetlight, each V-Pole would house mobile-network and WiFi antennae as well as electricity-grid connections, for the ultimate purpose of recharging electric vehicles via colourful patches that look like something from Discs of Tron. Hey, this is Vancouver: you knew there was gonna be an electric car aspect to this proposal, right?

Color schemes for the V-Poles include Killer Whale, Tidal Pool, and Black-Capped Chickadee. 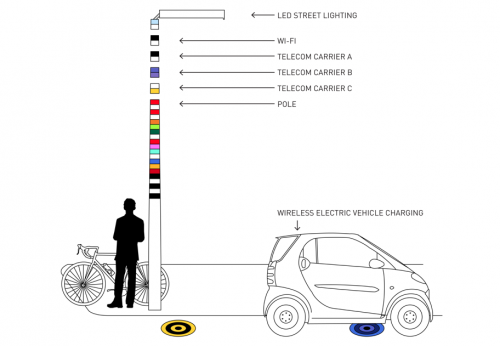 If you're thinking, "Those Telecom carrier elements are too small," you're right, at least in terms of the current technology. The V-Poles would use lightRadio technology, developed by Lucent-Alcatel. Each element is roughly the size of a Rubik's Cube. Each lightRadio cube can be stacked to amplify one another, and if one fails, the rest will keep on chugging. This is how they work:

Towards an open-source future

“The City of Vancouver is signaling its belief that the future is about smart, open-source technology,” said Coupland:

“This is an inevitable technology and a massive entrepreneurial opportunity. Urbanites want what the V‑Pole provides. Now is the time for partnerships and alliances to begin.”

The service providers consulted were Rogers, Telus, Shaw, and Wind, whose downtown coverage could use a stability boost.

The July 16 report distances the City from a shotgun wedding to these new network poles:

The form of license agreement contemplates initiall license terms of between one and ten years. Thereafter, licenses could be renewed by the licensees, however they would be terminable by the City, in the City's discretion, at any time during any renewal term. In addition, at any time, whether in an initial term or a renewal term, a license would be terminable by the City in the case of a breach of the agreement by the licensee. The licence agreement also contemplates the granting of a broad indemnity and a release of liability by the licensee to the City, and that licensees must obtain certain insurance coverage.