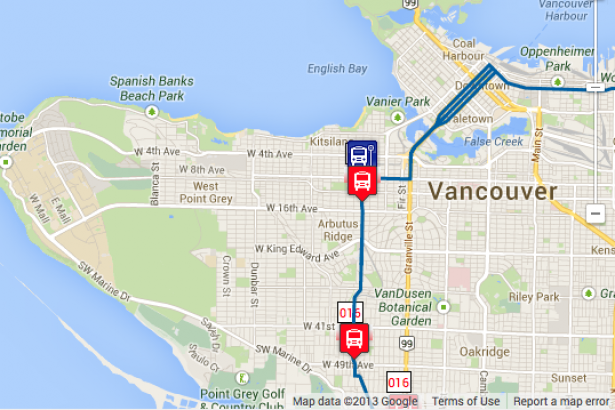 Tracking Vancouver buses in the wild

You're heading home late in the evening. You took a cab or a Car2Go downtown, but now... let's say you're not quite okay to drive, and you don't want to shell out twenty bucks for a cab. Time to check out that "public transit" everyone's talking about.

You find the nearest bus stop, but now what? Where do all those numbered buses even go? Wait, what's that in your pocket... sweet, a smartphone! You won't have to spend the rest of the night wandering the streets.

The right tool for the right job

Translink's own mobile-friendly trip planner is glacially slow and tragically prone to misunderstanding street names, but I must grudgingly concede that it's useful for planning multi-step journeys. However, most of the time I just want to know when the next bus or SkyTrain is coming.

As an Android user, my recent go-to has been Live Translink by ILH. Its mapping interface is really clean, and I can find bus info with a minimal number of pinches and taps. Let's try something new, though...

New kid on the block

The Select a Stop feature did not function correctly when I tested it. There was nothing I could enter into the text field that would yield a result of any kind. I tested against a few different intersections and SkyTrain station names, and could not get a result no matter what I did. The screenshot series below is for Burrard Station, input partially at first, then as found through Translink's own trip planning tool. 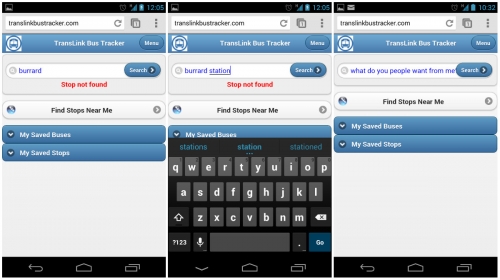 Searching by stop number worked, for the good that will do the average commuter. I don’t necessarily know the numerical designation of the bus stop I need, as should be presumed of any rider. (Translink's own site can— for the most part— manage this.)

We aren't necessarily standing next the bus stop we want to know about: we're standing in the foyer of a restaurant, it's raining, we want to know if it's worth dashing out into the street now, or if we might as well stay for another twenty minutes. We will think of that bus stop as “West Broadway and Arbutus”, and not “#51036”.

Remember, developers: the user doesn't use the tool just for the sake of using the tool. She is in the middle of living her life, and the tool must fit into that life and make it easier.

This is what should happen, as demonstrated by Melbourne mainstay Tram Hunter: