From military to mainstream: experts say drones taking off in many industries 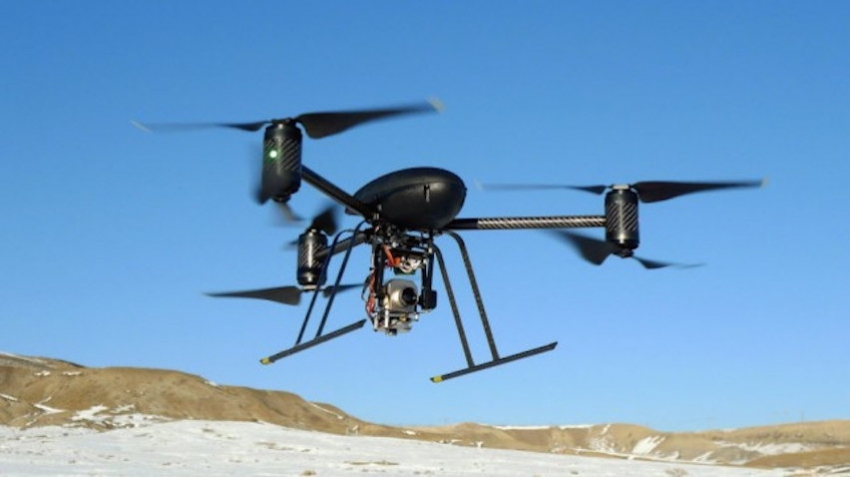 Pilot-less flying machines like the Dragonslayer X6 pictured above, are booming both recreationally and commercially. Photo by The Canadian Press.

BURNABY, B.C. — A vast smile breaks out across Wyatt Travis' face as the machine he's operating tilts slightly and whirrs upwards, an omnipresent buzz echoing from the four dizzying propellers.

It's Travis' first time flying a drone and he couldn't be happier.

"It was incredible," he says after safely landing the 1.28 kg machine. "It was a lot easier than I thought. And a lot of fun."

Once thought of as the stuff sci-fi movies, pilot-less flying machines are booming both recreationally and commercially as tech-enthusiasts and different industries explore their capabilities.

And experts say this is just the beginning.

"You have to have your head on a swivel these days because it's advancing so fast and the technology is changing so quickly," says Declan Sweeney, co-founder of Metro Vancouver's first-ever Drone Fair, held in Burnaby, B.C., this weekend.

Sweeney has been working with drones for nearly 15 years, and says when he started, most other people flying unmanned aerial vehicles wore military uniforms.

Today there are a whole range of outfits flying drones, from hard hats on construction and mining sites to headsets on the back lots of Hollywood blockbusters.

The Federal Aviation Administration announced earlier this month that there are now more registered drone operators in the U.S. than there are licensed pilots.

Amazon has plans in the works to use the unmanned flying machines to deliver packages, and companies across Canada are already using the machines to survey land, monitor wildlife, help search and rescue operations and more.

But the new technology comes with concerns. As drones have dropped in price and become increasingly mainstream, questions have bubbled up about safety and privacy, as the machines fly over backyards and into commercial airspace.

Eric Edwards of non-profit drone association Unmanned Systems Canada says there seems to be a misconception that rules and regulations governing use of the machines are vague.

"They're not. The rules are very clear," Edwards says.

"Whether you're in the construction industry or the forestry industry, this is still aviation. You're committing an act of aviation."

Transport Canada requires operators to get a special certificate in order to operate a drone commercially, he explains.

The agency is currently working on a set of regulations for operating all small unmanned aircraft, whether recreation ally or commercially, and has launched a public awayness campaign dubbed "know before you fly."

Schools are also beginning to educate people about the machines. The British Columbia Institute of Technology will launch a course this April to teach the basics of unmanned aerial vehicles.

The school already has a fleet of drones which are used by almost every department, says Chris Cambon, project lead for unmanned aircraft systems at BCIT.

"Construction uses them, natural resources, geomatics. Everybody but health sciences, and we could probably find an application for them, too," Cambon says.

There has already been a lot of interest in the new course, Cambon says, not only from fresh-faced students, but from experienced pilots looking to transition to new careers, too.

"Young kids, old kids. I mean, how can you not love this technology?" he says.

Sweeney says he's recently had calls from people who want to use drones to survey the inside of nuclear plants, and he's heard the machines are being used to deliver mail in Europe and as life-saving flotation devices on Australian beaches.

He's excited to see where technology and imagination will bring drones next.

"Kids are going to start off playing (first person view drone) games and stuff like that. But it's actually going to translate into a future career," Sweeney says. "And that's going to be awesome."

Drones, dogs and DNA the latest weapons against invasive species