Adam Chapnick,  principal of the crowdfunding site Indiegogo, sat down with me for 10 minutes at the Grow conference in Vancouver, Canada to share his insights on business (Listen to the audio recording).

Indiegogo is the world's largest open crowdfunding platform, where anyone from anywhere can raise money for anything at anytime, according to Chapnick, who in addition to his work at Indiegogo is also CEO of Distribber.

Kickstarter raised 10 million in 2011. In 2012, Indiegogo meanwhile raised 15 million, which is the largest amount of money ever raised for a crowdfunding company to date according to Techcrunch. 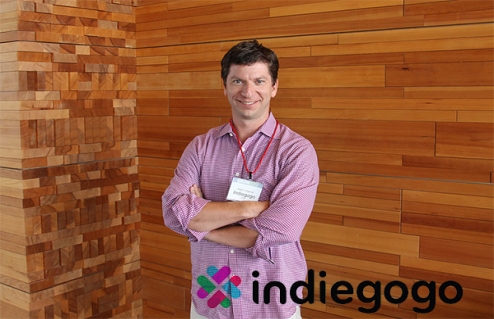 How did Indiegogo start?

It was started in 2008, when Danae Ringelmann and her cofounders, Slava Rubin, and Eric Schell saw an opportunity to help revolutionize the way that films were getting funded, with an eye towards applying that to everything in the world.  Danae was working as an analyst in the entertainment industry and really saw that filmmakers were having a hard raising funds, and conceived of this as way to solve that problem. We started off in film and then opened it up to anything, anywhere. Danae first had the idea in 2006 and then launched in 2008, so we've been around for about five years.

Was there anything out there like Indiegogo at the time or were you creating something new?

Crowdfunding isn't new. It goes back thousands of years of people pooling their money together to get a common desired outcome. The Statue of Liberty was a popular example of crowdfunding.

People sent in $10 to help put the pedestal in the bay where the statue could go on. Doing it the way we do online with the interface that we created, we were the first that we know of.

Why is crowdfunding so popular?

It works because it taps into a couple of revolutionary ideas.

One, it’s a whole new layer of commerce for people who are creating campaigns to connect with their customers, fans or audience.

In the old days, they had to make whatever their thing was. When it was done they would go to market, and they would say does anyone want  this thing I made and they would hope that they had an audience. Now with crowdfunding, the same people can go and say they have a plan or idea ... you can be part of that.

In the new way, you invite everyone into the process. You say if you’re a little bit passionate, you can get the thing for $10 when it’s done. If you’re really into it, you can give me $50, you’ll get the thing in the special edition, or you’ll get two of things signed by me, or some other experience that allows you to be more connected to me -- the process, and some kind of endeavour you maybe always wanted to be part of but couldn’t be. It’s a very exciting way to unlock the value of the creative process people do, and invite people who want to be part of it.

I was talking about the idea of being the “shadow artist”. The idea that  people always wish that they could have tried something else, but they made a decision to be what they are for some good reason. For example, I’m a dentist, but I wish I had been a baseball player. If you’re a lawyer but you wanted to be a movie star, but you don’t want to be a movie star enough to start that career and do all the miserable stuff you have to do to become an actor.

But I have a movie on Indiegogo, if I say to a lawyer, if you give me something like 500$, then I’ll put you in the film in a scene. If you always wanted to be a film maker, you can come to the set and be part of the crew or make certain creative decisions just for trading money. That’s really fun, because suddenly you’re part of a process -- just for a weekend -- in exchange for money, and that was never possible before.

In the evolution of the kind of campaigns that people started, have you seen a difference in how people are presenting them or where they are in their project?

It’s been amazing, thrilling to see how people evolve. When it started, it was very one dimensional – like,  “We need money, thanks, see you later.”