This Chrome extension makes you awesome at cocktail parties

You read big numbers in news articles, but now you can visualize them. 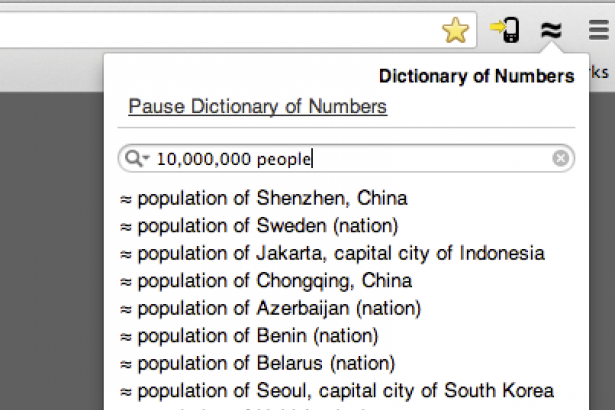 How many tears in a bottle of gin? 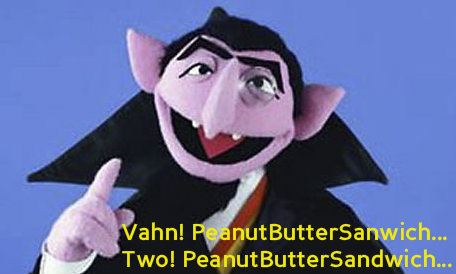 How many cabs in New York City, how many angels on a pin?
How many notes in a saxophone, how many tears in a bottle of gin?
How many times did you call my name, knock at the door but you couldn't get in?

It's not the numbers themselves, but what they mean to us.

That's why Glen Chiaccieri developed a Google Chrome extension called Dictionary of Numbers, which quietly reads along with you in your browser. You then click on the little bacon-lookin' icon in the upper right of the browser, and it spits out some easily-visualized examples.

Own the cocktail party

Now you'll be epic at cocktail parties. When someone swirls their brandy and says, "That wildfire in Texas consumed 500,000 acres," you can get right up in his or her face and hiss, "That's the size of Tokyo!" Okay, don't hiss it. That would just be freaky. Lean back and stare into middle distance, and just let that little factoid float across the room.

The extension is still in beta, so not every item has a corresponding statistic. Dictionary of Numbers is pretty good about placing its findings next to the numbers found in the article as you read, but it still misses a few.

Be realistic, now: no way would a brand-new (and free) browser extension be able to spit something out for every single number you come across. Those sums would have to correspond to something: the size or population of a city, the depth of an ocean, the cost of a private jet.

Also, not every item's found matches are exhaustive. For example, when you type in "$50,000", you get this: 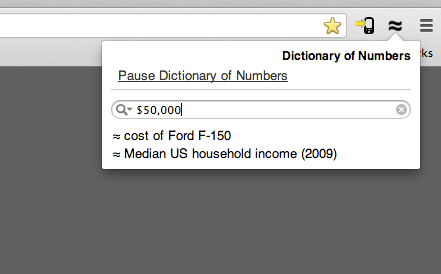 As you can plainly see, missing is "What you'd have to pay Ice-T to call him 'Gladys'".

I found this via the xkcd blog. Of course I read xkcd.