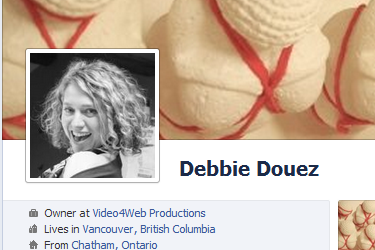 Vancouver filmmaker Debbie Douez had no idea that profile was being used for a Facebook ad until a friend asked if she had some kind of "special relationships" with an advertiser. Initially, Douez was confused: what advertiser?

"I actually didn't see the ads myself," Douez told The Vancouver Observer. "The deceptive part of this is that you, as a Facebook user, do not know that your image is being used in advertising. Only your friends know."

Last year, Douez -- owner of Video4Web Productions -- did something that most Facebook users do on a regular basis. She clicked the "Like" button on a Facebook group called "Cool Entrepreneurs." She thought it would show up just once in her news feed to her contacts, as normally happens when she likes a page.

From her friend, however, Douez discovered that her name and photo was continuously showing up in an ad on her Facebook contacts with the caption, "Debbie Douez likes Cool Entrepreneurs". The Facebook ad troubled Douez: she didn't have any kind of "relationship" with Cool Entrepreneurs (sponsored content by Facebook), nor was she being paid to promote them. So why was her name and face being used, as though she were a spokesperson for a product?

"When I like a page, I am okay with that information being displayed in my news feed," she said.  "It's one thing to let my friends know once that I 'liked' a page -- quite another to then take my image and use it repeatedly, as advertisement."

Douez's case is highly unusual: while over 845 million users rely on Facebook worldwide, few have gone out of their way to challenge the social networking giant.

“This is one of the first cases in Canada that someone has actually sued Facebook for this," Peter Chow-White, an assistant professor in communications at Simon Fraser University who specializes in social media, said. "In the long struggle for privacy and ownership of content, especially on Facebook, this is a pretty significant move.

"This is an instance in which a user is pushing back and saying, 'My likeness is something that I  can control ... that it's not the right of corporations.'"

Readers' comments on the CBC report about Douez's lawsuit reveal mixed feelings toward her case. While some expressed sympathy, many suggested that Douez should have known better.

"Facebook has every right to exploit her once she signs up," read one comment, noting that Douez's unpleasant experience "serves her right".

"If you're not paying for it (Facebook), you're not the customer; you're the product," said another.

Chow-White said the shift in attitudes around Facebook and online privacy has been a recent phenomenon. Only four or five years ago, people would have been surprised to hear of a story about unauthorized use of personal photos -- today, however, people hardly bat an eye.

"Nowadays, it's more like, we kind of understand the terms, but users aren't really dictating the terms," he said. Young people in particular, he noted, are growing up uncertain whether or not they can or even should control their privacy. Although it doesn't apply to everyone, he said, many people are willing to relenquish some control of privacy in order to use a free service.

So how can people protect their online privacy and personal content? Douez, from her experience, said she thinks it's important to carefully scrutinize conditions when signing onto a service such as Facebook.

"Unfortunately, it is not easy to know this information as it's buried in pages of privacy documents," she said. "Facebook counts on this fact and as a result, users get forced to opt in to a variety of promotions."

Although Douez might have been able to avoid the Facebook ads by being more careful of what her "Like" button entailed, it's not easy for social media users to stay under the radar.

"To be private is not a passive thing anymore," Chow-White said. "You have to be on the ball, you have to be savvy, wary, and you have to be thinking about what kind of participation you're going to have online.”

Douez said that Facebook should be more proactive about asking users for permission to use their names and profiles for advertising, and give them an option to say yes or no.

"With public pressure, maybe this will change," she said. Her lawsuit, she hopes, will add to some of that pressure on Facebook.