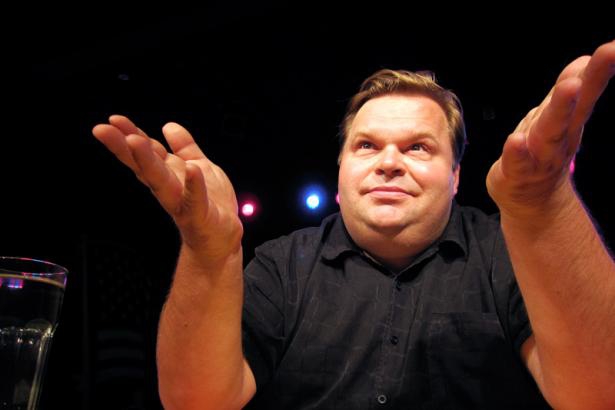 Mike Daisey (pictured above) attacked Apple and Foxconn on NPR's "This American Life" but did he tell the truth?

Media figures who shape our understanding of events worked overtime this past week-end writing about how a self-proclaimed monologist named Mike Daisey snookered Ira Glass's "This American Life" on National Public Radio with sensationalized descriptions of working conditions at Foxconn, the Taiwan-owned company with factories in China that produce Apple product components.

While the majority of the critiques have focused on the blurred lines between journalism and entertainment or Mr. Daisey's shamelessness and general lack of ethics, I'd like to put in a good word on behalf of his guerrilla tactics and to praise Mike Daisey's attack on Apple and Foxconn, despite how he apparently took liberties with the truth.

Were it not for the fictional details he loaded his story with -- to the point where he attracted other journalists, one million listeners and the klieg lights of scrutiny -- an unfortunate fact of life in Silicon Valley would never have come to light. Namely, how far from reality a narcissistic CEO can live when neither a docile local business press nor a state legislature can keep up with the new scenarios its industries invent.

If I can assume many of you media junkies already follow the US outlets, you know how the tale unfolded. Shortly after the partially fabricated exposé aired with Mike Daisey's attack on Apple and Foxconn, an American Public Media reporter in China, Rob Schmitz, punched holes in the story. Next came TAL's broadcast and publication of "The Retraction". For those who may not be media junkies or who were in the backwoods (how do Vancouverites refer to the wilderness?) when the story broke, here's further recap.

On Friday, Ira Glass -- radio star, cousin of Philip Glass and producer of TAL -- retracted a recent broadcast segment when it became apparent that the TAL fact-checking process had failed. Not withstanding the fabrication of many details, Daisey's Foxconn segment was one of TAL's most popular podcasts ever (one million downloads), inspiring one wag to complain it was because "activist hacks just can't get enough of that anti-capitalist stuff". 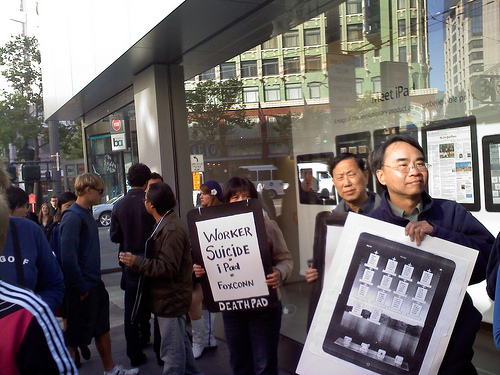 Silicon Valley and the cult of the CEO

The cult of the untouchable CEO that reigns here is characterized by a world in which the top guy convinces everyone that to keep the profits flowing, anything he does must be tolerated without question or complaint. Due to the value, in monetary terms, of his vision (his inventions) to the economy, there shouldn't be any restrictions or rules specific to the work conditions in Santa Clara County, much less Shenzhen, to protect people from being run over roughshod by him and his close associates. It's a world where a neutered local business press doesn't dig into things that the corporate giants don't want them to.

Granted, in an economy as entrepreneurial and creative as the Bay Area's, there are many paradoxes. Despite detailed reports in publications like The New York Times about the poor working conditions in Apple's Chinese factories, demand for iPhones and iPads remains jaw-droppingly high. Even though a petition for a more ethically-built iPhone 5 has gathered more than 130,000 signatures so far, public outrage won't have any impact, a report suggests, until demand for Apple products starts to wane.