Vancouver – the place to be for 3D animation 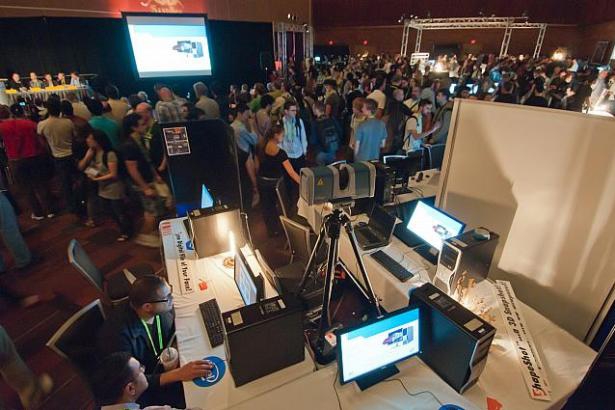 As big and successful as SIGGRAPH Vancouver was, it will always be compared to when the convention is held in Los Angeles.

Kenny Roy is veteran animator, Animation Mentor instructor and owner of LA based Arconyx Animation Studios, has been to a dozen SIGGRAPH conferences. He explained that even though SIGGRAPH Vancouver is smaller than LA, that's not necessarily a bad thing.

“In LA you have a lot of people who are overly excited people and aren’t specifically involved in the actual 3D industry, but here (in Vancouver) we have people who are more professionals who are into the actual artistic and technical aspects of 3D. It really feels like this is the ‘true industry‘ since people are more dedicated and travel just to be here.“

Roy elaborated on the role of Canada in the global 3D market. “Canada has always supplied a healthy amount of talent to the animation industry,“ he said. “I was surprised when I was working for Rythm and Hues in LA, and then at WETA in New Zealand, of the large percentage of Canadians working there.“

Vancouver: a hotbed of animation talent

Vancouver is in the middle of a industry boom, with many local studios ramping up their numbers to accommodate for their increased production. One such studio is Rainmaker Entertainment, known their work on the animated Barbie and The Nutty Professor television series. The studio is currently working on their first full length feature - Escape from Planet Earth.

"With the influx of the new studios coming to town, what can be seen as competition really is real growth in the industry because it’s drawing more talent to Vancouver,“ said Tara Kemes, director of talent development for Rainmaker Entertainment. “In the past, we were used to seeing talent leave Canada for work opportunities, but these days, people are coming here to stay. It’s awesome for everybody!“

Kemes explained that Vancouver’s ever-expanding talent pool is encouraging many companies to set up studios here. “Vancouver is one of the best cities to live in and despite the fact that it’s expensive, it’s such an amazing location for people to start families.“

Ken Roupenion, Director of Digital Production of multinational animation and VFX studio Rythm and Hues echoed the same sentiment and confirmed that the studio is opening another branch in Vancouver. “There are tax incentives that are bringing many studios here, but the impetus for moving here is that Vancouver has such a rich talent pool to draw from and the quality of living is fantastic.“

“I just came from our office where we have been doing interviews, and it was very encouraging to see so many people of such high calibre. We know it’s very competitive up here in Vancouver, even amongst the fresh graduates.“ Said Roupenion with a smile.

Rhythm and Hues is currently working on “Life of Pi", staring Toby McGuire and directed by Ang Lee, and “Alvin and the Chipmunks: Chip-wrecked“, the later will be released during the Christmas season this year.

Ryan MacDougall, studio recruiter for Capcom Vancouver shed some light about the tax incentives that studios are receiving.

“It’s really nice to see the Vancouver government provide 3D studios with tax subsidisation to help the studios out,“ he said. “It’s really big in Quebec right now, it’s almost up to 30 per cent -38 per cent, which is massive, and it’s why you see so much growth there with studios like THQ and Warner Bros. In Vancouver it’s relatively new, with the tax incentives being just under 20 per cent, it’s a very good start this has really helped to inspire the growth spurt.“

“It's been great! We have a lot of autonomy, and there's a lot of collaboration too. We are a fully fledged studio, and it's a great honor to have CAPCOM let us develop a full game independently. Also recently, superstar concept artist Naru Omori (Devil May Cry, Dead Rising) has as arrived from Japan to work with us."

With Vancouver being such a hotbed for the games and animation industry, many hope that companies will continue to generate more jobs for locals in the years to come.