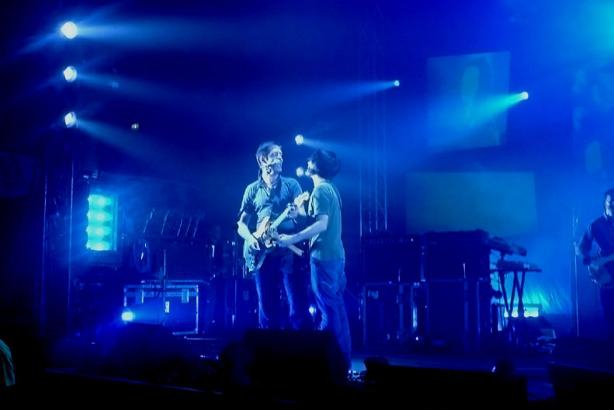 So what do you do when you're a band that's spoken out against China on behalf of Tibet, but you still want to court your Chinese fans -- and maybe even exercise a little free speech while you're at it?

You might try doing what alt-rock British band Radiohead has done: Ease your way onto weibo, a microblogging site that is China's rough equivalent of Twitter.

Here's an Associated Press story on how that works:

HONG KONG -- Radiohead has taken a tentative step into censored Chinese cyberspace, even though the British rock band has been critical of China's human rights record.

Radiohead recently launched a page on the "weibo'' site of leading Chinese Internet portal Sina.com. "Weibo,'' which translates as "microblog,'' is the Chinese-equivalent of Twitter.

But the band has only posted a single message on Friday. It says "testing the weibo.''

Sina.com checks the authenticity of celebrity weibos and has certified the Radiohead weibo as genuine.

The move comes despite Radiohead's activism against Chinese government policies. The rock group has performed at Free Tibet concerts and in December, posted a note on its official website urging fans to campaign for the release of Chinese dissident Liu Xiaobo, who won the Nobel Peace Prize last year. "You know it makes sense,'' the band said.

Such comments will be unthinkable on Radiohead's Sina microblog. The Chinese government screens Internet content for material it deems politically sensitive, such as calls for greater autonomy in Tibet and commentary on the 1989 Tiananmen Square crackdown. Foreign social media sites such as YouTube, Facebook and Twitter are blocked.

In a recent example of suspected celebrity censorship, Hong Kong actress-singer Gigi Leung last year removed an excerpt from a news story about a Chinese activist's court case from her Sina weibo account. Fans believe Leung was muzzled but her agent said she removed the story herself after some of her followers left messages saying they were upset by the story.

Radiohead's testing of the weibo platform highlights the dilemma facing foreign acts eager to tap the massive potential of the Chinese market because they must be willing to subject themselves to some degree of censorship.

Foreign musicians have been scrutinized after Icelandic singer Bjork shouted "Tibet!'' during a 2008 concert in Shanghai following a song called "Declare Independence.'' A year later, another British rock group, Oasis, scrapped its planned debut in China, saying Ministry of Culture officials were offended by the fact that front man Noel Gallagher performed at a Free Tibet concert in New York City in 1997.

There was much speculation about whether Chinese censors would set restrictions on antiestablishment icon Bob Dylan when he performed in China in April. Dylan said in May that Chinese officials asked him for a song list but didn't censor it.

Radiohead's appeal in China is clear from the big following its weibo quickly drew. The website now has nearly 49,000 followers and its terse first message has drawn 3,800 comments and already been reposted nearly 10,000 times.

"Is this for real?'' user BrattyB said.

Radiohead is not the first western celebrity to set up a weibo. Others include Tom Cruise, Microsoft founder Bill Gates and NBA players Ron Artest and Kevin Garnett -- although the number of their followers trail far behind Chinese celebrities.

A U.S.-based publicist for the band did not immediately respond to an email seeking comment.

The Digital Wall of China