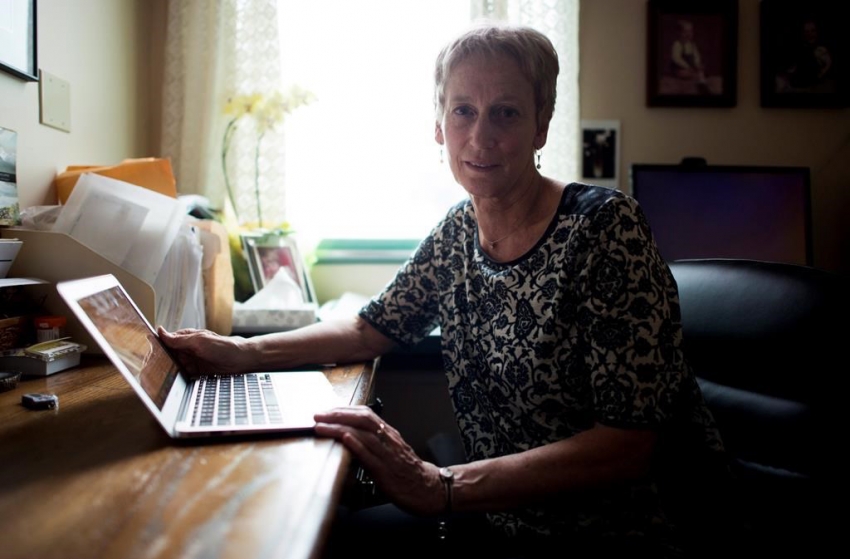 Dr. Ellen Wiebe, the Vancouver doctor who recently helped a Calgary woman with ALS die, said the original guidelines for medical staff were unacceptable. Photo by The Canadian Press.

VANCOUVER — A major British Columbia health authority has updated its guidelines for medical staff on how to respond to requests for assisted death, allowing doctors and nurses to refer patients to a colleague.

Vancouver Coastal Health first distributed a bulletin on Feb. 5 that advised staff not to provide advice on assistance in dying, but to inform patients that they may wish to speak with legal counsel as a court-ordered exemption may be granted.

Dr. Ellen Wiebe, the Vancouver doctor who recently helped a Calgary woman with ALS die, said the original notice was unacceptable as it appeared to warn staff not to engage in conversations about assisted death.

"The recommendations that went out to clinical units were outrageous," she said. "It was basically, 'Don't talk.' That's completely unacceptable. That hurts patients."

After the health authority issued an updated bulletin on Thursday that advised staff to offer to connect patients with a colleague for more information, Wiebe said she was satisfied.

The bulletin outlines several statements that have been prepared by Vancouver Coastal Health's legal, client relations and risk management teams, to be used as elements of a sensitive response to questions about assisted dying that avoids concerns about breaking the law.

"Please let's discuss concerns with your care plan and explore alternatives and additional supports," staff are advised to say. "I am not able to counsel you regarding your request about physician-assisted dying; however, I can connect you with a colleague who will meet with you to discuss your situation and your options."

It also says that Vancouver Coastal Health is developing a system to address clients' requests once the Liberal government introduces assisted-dying legislation in June. Until then, patients can only legally access assisted death if they obtain an exemption from a judge.

Spokesman Gavin Wilson said the authority began updating the guidelines after the B.C. Supreme Court indicated in late February that patients needed an affidavit from a physician in order to seek a court exemption for assisted death.

Vancouver Coastal Health operates hospitals and health centres in Vancouver, Richmond, North Vancouver, the Sunshine Coast and Sea-to-Sky corridor. The notice was sent to all medical staff, operations and medical leaders, and program managers to share with their staff.

The policy stands in contrast with that of Providence Health Care, a Catholic-based provider in Vancouver that has warned staff physician-assisted death is not permitted at its facilities.

Dr. Peter Edmunds, Vancouver Coastal Health regional medical director for home, community and palliative care, said a working group of about 13 people from across different disciplines was formed last year to explore how the health authority would provide access to assisted dying.

He said the guidelines issued in February were written at a time when expectations were less clear for nurses and doctors to respond to assisted-dying pleas. Vancouver Coastal Health would never attempt to obstruct access to the service, he said.

"We absolutely respect this service and understand that it needs to be provided. We just want to do it in a way that's the most beneficial to patients and staff."

Edmunds said Wiebe is the doctor to whom staff will likely refer patients, as he doesn't know of any other local doctors who have come forward publicly to offer to provide assisted death.

Colleges that regulate nurses and pharmacists have also been grappling with legal concerns around their members participating in assisted death.

The College of Registered Nurses of B.C. says on its website that nurses should seek an independent legal opinion if approached to participate in assisted death. When the Supreme Court of Canada struck down the assisted dying ban last year, it did not say the exemption applies to nurses, the college's website says.

Last week, the College of Pharmacists of B.C. altered its stance after the court exemption allowing the Alberta woman to die expressly included the pharmacist. The college now advises on its website that pharmacists must be authorized by a court in order to dispense drugs as part of the assisted-dying process.