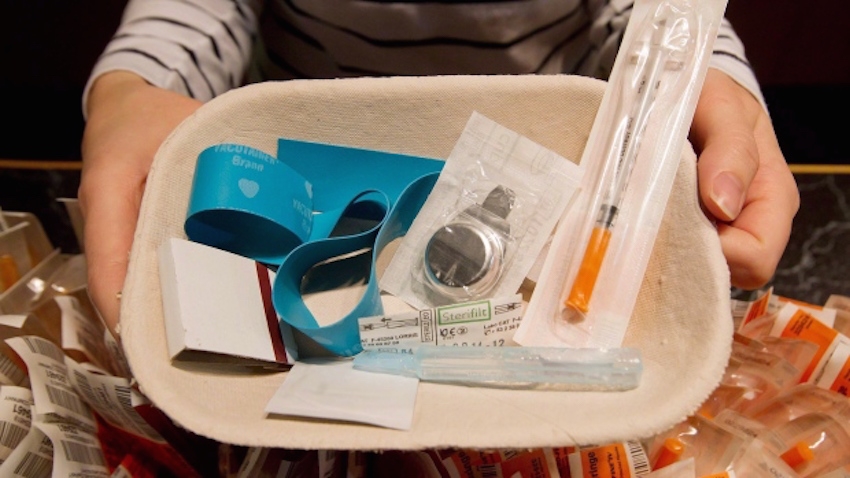 Triggered by fentanyl deaths, B. C. Health officials are considering offering supervised injection sites, like the one at Insite in Vancouver (above), to health clinics. Photo by The Canadian Press/Darryl Dyck.

Health authorities in Vancouver and Victoria have begun discussions about providing the services in clinics that already help people with addictions, for example, through clean needle programs.

"The situation here is getting worse," said Dr. Mark Lysyshyn of Vancouver Coastal Health in an interview Thursday. "We just see that offering supervised-injection services is a more viable way to prevent some of the harm that's being caused right now."

The discussions mark a shift for harm-reduction proponents who were long stymied by the previous Conservative government. A rise in overdose deaths from the dangerous opioid fentanyl has added to the urgency, officials say.

Health authorities must apply for an exemption from federal drug laws in order to offer supervised-injection services. Lysyshyn said Vancouver Coastal Health is considering applying for a single exemption to cover multiple sites.

Community health centres are separate from hospitals and offer a range of services. It's not yet known which ones would offer supervised injection, but the authority plans to target those that already offer harm reduction to drug users, he said.

Lysyshyn said the authority was encouraged by Health Canada's recent approval of the Dr. Peter Centre, an HIV-AIDS clinic that has offered supervised injection along with other services in Vancouver's west end since 2002.

"We're sort of in a new world now," he said. "There's been a lot of interest in Canada in harm reduction and a belief that it's been the right thing to do for people and that it saves lives, but we haven't been able to move on that in the past 10 years."

The B.C. Coroners Service has said overdose deaths are on the rise in the province and a growing portion are linked to fentanyl, a potent synthetic that is often cut with other drugs. Thirty per cent of overdose deaths involved fentanyl in 2015, up from five per cent in 2012.

"The major factor for us has been the change in attitude at the federal government level. I think it was really clear under the previous government that something like this would not be approved."

When the Conservatives were in power, the federal government waged a court battle for years against Vancouver's only stand-alone supervised-injection site, Insite, eventually losing at the Supreme Court of Canada. It also brought in legislation that made it more challenging to open new sites.

Health Canada spokesman Sean Upton said it would be premature to speculate on whether the Liberal government would repeal the legislation.

Provincial health officer Dr. Perry Kendall said Vancouver and Victoria need more supervised-injection services. He said stand-alone centres like Insite work in communities with a high concentration of drug users, but they are an expensive model.

"When you have a number of clinics that are already serving this population and they're already partly engaged in treatment, it's a lot more affordable to build it into an existing facility," he said.

"It may also incent people who weren't engaged in primary care or addictions treatment to come in."