You can tell a lot about a city by whom it lets on the bus. 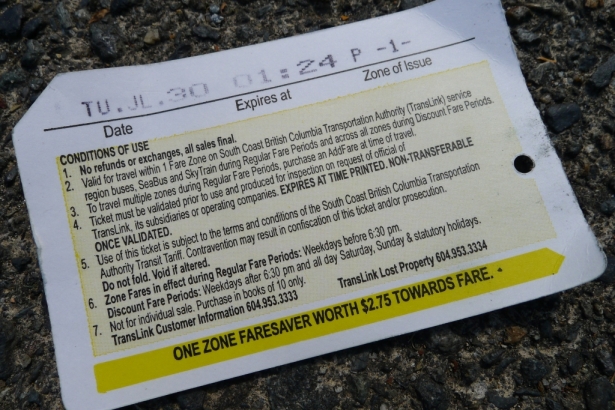 Faresaver ticket: soon to be extinct. This affects the homeless more than it affects you.

"ThankyousirThankyousirGodblessyousir," stammers the elderly man, maybe in his sixties, maybe in his eighties. Clearly homeless, he shuffles past the driver, who just nods and closes the doors. The bus pulls out into traffic as the man finds a seat opposite a woman in her forties. She's wearing black hose on a hot summer's day, riding the #20 Bus, Hastings at Main.

The woman signals for a stop, gets up, heads for the front door.  That's why she's wearing black tights: she's hiding an artificial leg. She waves to the driver without looking behind her as she leaves the bus.  Force of habit makes the driver wave back.

#4 Bus, Cordova and Main: "Sorry, buddy, there's already a cart on here. Next one's right behind me." The homeless man turns and trudgesback to the curb after attempting to I walk past him, jamming my single-zone transit ticket into the fare machine for validation. Bzzzt, k-chnk, I'm on.

I step past an elderly woman dressed in a beige jacket. It's hard to tell what colour it originally was. She's sitting in the first front-facing seat, a thin-wheeled metal cart in front of her. It's piled high with empty cans. She's lucky, she got on a few stops before.

Translink's bus drivers clearly don't enforce the whole you-need-bus-fare-to-ride-the-bus thing. According to a Translink employee's AMA, this is partly due to not wanting to hold up the bus by arguing with a drunk person, but also to avoid getting into physical altercations with strangers.

There's more to it than that, though. While Translink has a series of policies in place to avoid injury to its drivers, you can see that some bus routes in particular are very friendly to the homeless population. When touring Strathcona with Gregory the Hair Stylist, he had mentioned that the bus drivers who roll along Hastings through the DTES "don't care if you don't have your fare".

A driver taking a break from driving a West Coast Express bus takes off his gloves as he says, "Translink has a policy, but we just let them on. [...] When I used to drive the Hastings route, homeless people came on all the time and they were really nice, they said 'thank you'... I wasn't a bus driver forever. I know what it's like to be a dime short.

"Homeless is homeless. You know how it is." The driver shrugs, Esperanto for "whatareyagonnado?".

This willingness to break the rules (and, well, the law) in the name of compassion is well outside the norm in Canada. Catherine Broomfield, Executive Director of Human Youth Society, tells me that she knows of no policy of letting the down-on-their-luck ride city transit for free in Edmonton, where she works. Indeed, when working with the city's at-risk youth, Broomfield notes, "Access to transportation is a significant barrier for them." Those who are able to blag their way onto the bus constitute an edge case, it would seem.

A Backwards Approach to Homelessness

Addicts Tell Kids Not To Do What They Have Done

Lawyers, doctors and addicts at public forum urge Vancouver to save Insite