Just Say Hello: Making Vancouver a friendlier city, one cup of coffee at a time 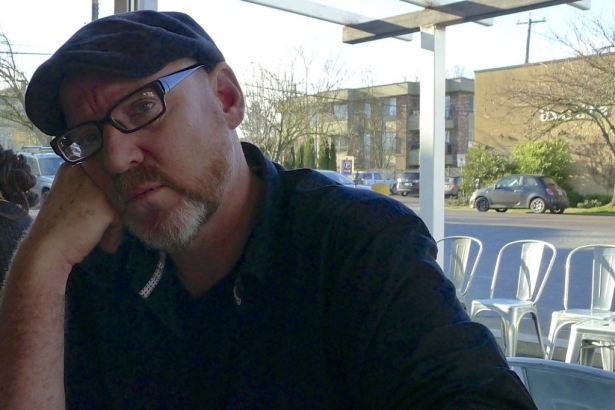 David Beattie is launching Just Say Hello. It's for our own good.

Is anybody out there?

"You can't fix loneliness, but you can try to erode it." David Beattie speaks from experience, the experience of living in Vancouver for 25 years.

Beattie comes to Vancouver from Durban, South Africa; by way of London and East Asia. He currently lives in Renfrew-Collingwood, which he describes as "so fragmented, so fractured, almost nobody speaks to anybody else." This was the test bed for his social venture, Just Say Hello.

The idea behind Just Say Hello is very simple: place a welcoming sign on a coffee-shop table to turn it into a place where it's socially safe to talk to strangers.

In Vancouver, this is easier said than done. Says Beattie, "I tried to pilot Just Say Hello at the Bamboo Café, and it was a complete failure. I was there for two hours, and the only other people who would have anything to do with me were other white males."

A former journalist and self-described amateur sociologist, Beattie had been researching social isolation. The more you read about the phenomenon of social isolation, the more you'll want to, well, not be socially isolated. To that end, Beattie and his friend Richard Drake got active on meetup.com, which has over 1,000 groups based in Vancouver. (If you didn't know about meetup.com, you're certainly not alone: the site doesn't have much of a public presence here.)

Just Say Hello is modeled after Meetup.com, which was launched in New York City in 2011. Meetup.com relied on scraping existing blogs and BBS groups, basically spamming them with fake "International [your interest] Day" invitations in order to get like-minded individuals to meet in meatspace.

Internet users are more savvy these days, and Vancouver is inherently less friendly than New York. The fact that Vancouver needs something like Just Say Hello so much is an indicator of how hard it will be to make the project succeed.

Also, says Beattie, meetups are bound by their own rigidity. In Vancouver, he says, "people want to be able to go to a place when they feel like going there. Local,local, local." There's also the factor, he adds, of our not wanting to look desperate.

As for Vancouverites being reluctant to initiate conversations with strangers, Beattie doesn't blame racism or xenophobia: "There's... an expectation that you're not gonna be interested in me." That's a Vancouver thing, insists Beattie: "There's no serious argument [against] the claim that this city is different. Different from Toronto, or Calgary, or Seattle, or Montreal. It's just cold. It just is."

Just Say Hello, then, is about giving strangers permission to to think they're interesting. Because you probably are.

It's not just you

It seems I'm not alone in being alone...

– The Police, "Message in a Bottle"

Newcomers to Vancouver share depressingly similar stories of feeling left out. The Vancouver Foundation's 2012 Connection and Engagement Study(pdf) confirmed what you already had guessed, after interviewing nearly 4,000 people:

Beattie and Drake would add geography to that list: Vancouver is long and narrow, and cross-town travel can be slow and inconvenient. Beattie also cites what he calls "screen life", which you might also know as the blue-face phenomenon: commuters (and pedestrians) moving through the city, heads down, faces illuminated by their smartphone screens. Asserts Beattie, "Devices are divisive."

Vancouver's weather is also a factor: it's gloomy for so much of the year (this winter's non-ski season notwithstanding), but not cold enough to require community-wide snow-clearing efforts. Teamwork breaks down barriers and makes neighbours out of strangers.

Also, notes, Beattie, even "the best will in the world" cannot overcome language barriers.

(Those language barriers may be perceived as opposed to concrete, though: your spoken English may well be better than you think it is; or maybe you've been too shy to test out the Mandarin or Italian you've been studying.)

Drake, hailing from England, described Vancouver as being in its urban infancy, since so relatively few people have roots here. Adds Beattie, "It's like an airport terminal. It rubs off. I'm become that way. It's like an accent."

Just Say Hello intends to set in place a system that leads to small, spontaneous meetups almost everywhere, and at almost any time. A recognizable logo saying Just Say Hello will be printed on tabletop signs for coffee shops. Patrons can join people sitting at those tables, or ask staff for the sign and thereby invite others to join them simply for a beverage and conversation. It is that simple, at heart simply an invitation to say hello and chat.