You mentioned that you reached out for help but you had difficulty receiving it.  Why do you think that was?

There were really two main instances. One was I went and I saw a psychiatrist that I was referred to by my GP in Toronto. And it was just before I started university. And I was feeling very depressed and suicidal at the time. And unfortunately, I only saw him for one session, and then I went off to university. And I think just seeing one session, to be fair to the doctor, I don't think he had an opportunity to try and figure out what was going on. He did what he could, and then I was out of the picture. The second time was when I was in university.  There was a point when I was feeling quite suicidal and I went, and I sought out help. And I don't mean to be too negative, but the fellow who I saw just was not very capable of helping. So it basically was not recognized, at that point, that there was something wrong.

So receiving good treatment was important in your recovery.

That's part of it, I think, at the time, yes.  It's changed now.  I think my idea of what recovery is now has changed dramatically, but at that time it was getting up on your feet. And I think after the first instance it mania it took me about a year to feel like I was well again.

Michael, today you're open about your diagnosis.  Was it a different story back then?

Unfortunately, no. I never had the opportunity to be in the closet, because when I had that episode in university, it was so very public. And everybody knew something was wrong. And I think that one of the things that's a real credit to my friends at university was that literally all of them showed up at the hospital to check and see how I was doing.  To just try to be as empathetic as they could, and try to lend their strength. And so they all knew. And so I couldn't be closeted about it. And then also, I think part of me just didn't want to be. I think that I did what some people do when I was first diagnosed. And that was I was a little bit too open about it.  And some people weren't ready to hear that. But I think that was time went on I got a better handle on how to disclose, what to disclose, when it might be appropriate, when maybe you don't want to say anything. An example is my grandmother, whom I love very dearly, I don't think she ever would've been able to hear that I had a mental illness because I just don't think she would've understood. And I mean that in a very literal way.  I don't think she would've got it.  So that's a for instance where disclosure didn't happen.

Do you have any advice for individuals with a mental illness that are looking at disclosing to their friends and family?

Sure. I'm not one to give advice very often, but I think that something that's important is to do what you feel comfortable with. That's the biggest thing that I say to people. If you're not sure, go with your gut. And if you're still not sure, then don't do it, is usually my advice, depending on the situation, of course. And I think that there's usually three or four big themes of where it could come it. It comes up in work and volunteering. Or in school. It comes up with family. It comes up with friends, and it comes up with romantic relationships. It seems those are the main fields where it comes up. I certainly don't have any recommendations in the field of romance. I think it's very particular, and you have to figure out what works for you. But I think in other instances, the main reason why you wanna [sic] disclose in work or in volunteering is if you need accommodations. And that's important. And I think it's something that I would hope society is working more and more towards - making accommodations for people.

So how did you get involved in mental health advocacy?

… I actually took a bit of time off of working, about a year off of working because my mother was diagnosed with breast cancer, and I wanted to be able to lend my support to her. And then when it came time to go back to work, somebody suggested a pre-vocational course to me called the First Step Program, which is where I was receiving services at the West Side Mental Health Team at the time. And it was wonderful. It really helped me to come up with an idea of what I wanted to do. It put in touch with a vocational counselor, Caroline Penhale, who was absolutely fabulous and helped me dramatically. And she very slowly suggested to me, hey, have you though about working in the field of mental health?  And I said, no, I haven't. So the first thing she suggested was there was an academic paper being written of the services that she and who she works for offered. And they said would you like to be involved, and I said sure. So we worked on that project for about a year, and it got published, which was wonderful. And then from there, it was suggested that I might be interested in peer support work, and I said well that sounds interesting, applied, got in, took the training, and I'm now working as a peer support worker.

In regards to individuals with a mental illness, what do you think the biggest barriers to treatment are? 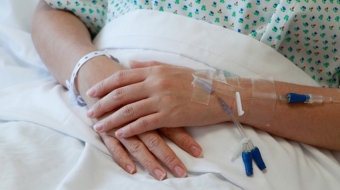