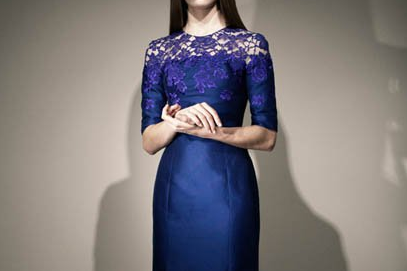 After weeks of speculation -- Will she wear a Canadian designer? Which one? How many? With how many maple leaves splashed across them? -- Catherine Middleton has offered a clear answer.

Yes, she will. And Quebec-born, London-based designer Erdem is topping the lacey list, with the royal newlyweds' trip to Canada now at its mid-point.

Here's a take on the royal choices by The Canadian Press:

TORONTO -- Canadian label Erdem scored a royal tour repeat as Kate opted to wear a second dress from the brand's Quebec-born designer while attending events in his home province.

The Duchess of Cambridge wore a vibrant blue lace Jacquenta dress from Erdem Moralioglu, accessorized with nude-coloured heels to kick off Day 4 of her first official visit abroad.

Kate was first spotted wearing the creation as she and Prince William took part in a prayer service onboard the HMCS Montreal docked in Quebec City on Sunday morning.

The form-fitting dress with sleeves hitting just above the elbow featured a slight slit at the right knee and floral lace overlay cascading on the upper part of the garment. The design is part of Erdem's pre-fall 2011 collection.

The Montreal-born, London-based Moralioglu created another similar lace-adorned Erdem frock worn by Kate on Day 1 of the Canadian tour.

Kate stepped off a Canadian Forces jet Thursday in Ottawa in an elbow-length, dark-coloured Erdem dress.

She wore the dress to attend a wreath-laying ceremony with William at the National War Memorial in the heart of the city's downtown core, followed by a walkabout among the thousands of people lining the memorial square, as well as an official welcome ceremony at Rideau Hall.

A press representative for Erdem said Sunday the designer was unavailable for comment.

By mid-afternoon Sunday, Kate had switched to a slightly more casual look as she shook hands and met with well-wishers at a community event in Levis, Que. She wore a creamy-coloured sleeveless scoop-neck Vanessa crepe dress by Joseph, with banding and ruching at the waist.

William was also in more relaxed attire in Levis, wearing his shirt unbuttoned at the collar with rolled-up sleeves and a belted pair of jeans, a contrast from his more formal suit and tie from earlier in the day.

Alison Eastwood, editor-in-chief of HELLO! Canada, said Kate's earlier Erdem outfit on Sunday was a "good diplomatic'' choice of label for Kate's appearances in Quebec, seeing as the designer hails from Montreal.

"After being (incorrectly) touted as a front-runner to design Kate's wedding dress, the label is finally getting the recognition it deserves,'' Eastwood said in an email to The Canadian Press. "He was definitely already on the duchess's radar as he's based in London.''

Eastwood said the duchess always makes a strong fashion statement in whatever she wears, and the choice of another Erdem lace creation is no exception.

While she felt the Erdem looks flattered the duchess, Eastwood said Kate's selection of the two dresses by the label were "slightly unusual'' given the nature of the appearances.

"They might appear better suited to cocktail hour than to outdoor daytime and military-themed events,'' Eastwood said. "Perhaps she prefers to stand out that way rather than by forcing it by wearing bold colours that are out of her comfort zone."

Erdem hasn't been Kate's lone Canadian designer of choice. She was seen wearing a navy blazer from Toronto-based label Smythe as she boarded a jet last Thursday in London for the flight to Canada.

But midway through the Canadian tour, the duchess has largely been seen wearing U.K.-based labels, including repeats of two previously worn items -- a black-and-white bird Issa dress for a youth barbecue and reception at Rideau Hall and a cream Reiss dress on Canada Day.

Eastwood said it will be interesting to see if Kate embraces other Canadian labels during the remainder of her official visit in the country.

While she feels the duchess "radiates elegance and confidence'' in her style choices, Eastwood said she would appreciate seeing a tad more colour in her future wardrobe choices, like she did on Canada Day where Kate accessorized her ensemble with a rich red maple leaf fascinator and red heels.

"She might want to take a few pointers from her
grandmother-in-law the Queen, who is never afraid to ramp up her
colour palette,'' Eastwood said.