Legendary activist says Canada has often provided shelter from the stress of the U.S. -- and now it's where she has friends. 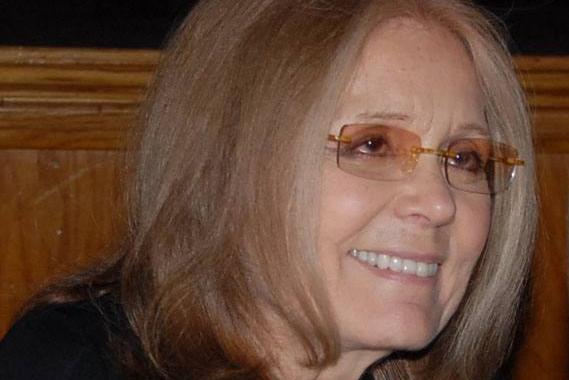 The Canadian Press has the story on why one of feminism's most beloved icons considers herself one of us:

TORONTO -- Gloria Steinem says she considers herself a "secret Canadian.''

The legendary activist, writer and lecturer jokes that she has often come to Canada "under stress'' from the United States to ask for asylum.

Steinem, in Toronto today to speak at a fundraising event for the Canadian Women's Foundation, elicited chuckles as she addressed a breakfast fundraiser Wednesday with the declaration that she frequently turns to Canada for refuge from right-wing U.S. leaders.

"I have often come here under stress from the United States to ask for asylum,'' a jovial Steinem told an audience of more than 1,000 supporters of the Canadian Women's Foundation.

Joking aside, Steinem said she does have a long history in this country, noting she headed north of the border in 1970 to practise speaking to the public and the media.

"At the very beginning of the women's movement I was terrified to speak in public and especially to the media,'' Steinem said in a 30-minute address that stressed the need for reproductive freedom and linked the women's movement to equality fights for minorities and gays and lesbians.

"I came here because I didn't know anyone and I thought that if I tried to do television here when I totally messed up no one would know.''

Now, Steinem says, she visits Canada because she has many friends here, including former UN ambassador and social activist Stephen Lewis and his journalist wife, Michele Landsberg.

After the speech, Steinem praised Canada for its more liberal positions on public health care and abortion, saying it is still more advanced than the United States when it comes to women's rights.

"Every once in a while I look over the border and think 'Oh, I wish I lived there,''' said the 77-year-old activist.

"And then I come to Canada and say that and they all tell me how much further you have to go here.''

Steinem is currently working on a project to document the grassroots origins of the U.S. women's movement and a new book about her more than 30 years as a feminist organizer.

She said she is hopeful for the future but is alarmed by clear steps backward that continue to undermine women. She noted that pornography is much more accessible and popular than ever, and said that on her frequent visits to college campuses she often meets women who say they can't escape it in their dorms.

"The 'Housewives' shows, for instance, are trying to convince us that homemakers, so to speak, are selfish, overpaid, over-dressed, over-plastic surgeried,'' said Steinem, who co-founded Ms. magazine in 1972.

"The so-called reality shows mostly have nothing to do with reality but are resorting to old stereotypes.''

The swipe comes after Steinem recently criticized NBC's sexy drama "The Playboy Club'' for presenting a distorted view of the notorious men's lounge. In the early '60s, Steinem famously went undercover as a bunny to report on conditions at the club.

Steinem said she's inspired by young women who tell her they go on "media fasts'' for 30 days in a bid to preserve their self-esteem.

"If you just go through life for 30 days looking at real people, real human beings instead of the computer-manipulated imagery in magazines or whatever it is that we're seeing -- plastic surgery done on television -- it can be very helpful,'' she said.

She said the fight for equality has changed radically over the decades and that she learns just as much from this new generation as she hopes they do from hers. She credited today's young activists with harnessing the organizing power of the Internet in a way her generation never could.

The battle continues, she says, but in a different form.

"For many of us, there was no women's movement when we were growing up or when we were young adults and we had to discover that it could be different, that we could make change,'' she said.

"I think that's a given but the hostility to the women's movement now takes the form of saying: 'Well, it used to be necessary but it's not anymore' -- trying to convince us that we should stop now.''

Organizers say tickets to the breakfast speech -- along with sponsorships, donations and matching funds from a generous donor -- raised more than $2.2 million for the Canadian Women's Foundation, which supports the economic development of women.