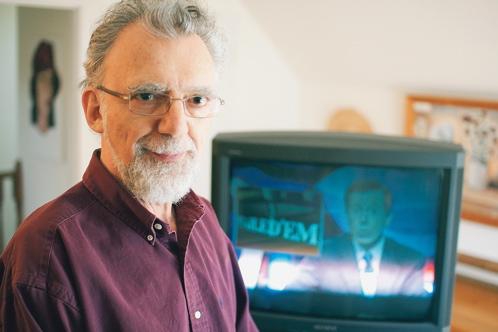 This is the story of how an article traveled from The Vancouver Observer website around the world.   “Acid Free America?” by Linda Solomon was published on April 22, 2007 on VancouverObserver.com. It started here:

Andrew Feldmar, a well-known Vancouver psychotherapist, rolled up to the Blaine border crossing last summer as he had hundreds of times in his career. At 66, his gray hair, neat beard, and rimless glasses give him the look of a seasoned intellectual. He handed his passport to the U.S. border guard and relaxed, thinking he would soon be with an old friend in Seattle. The border guard turned to his computer and googled "Andrew Feldmar,”

And on April 23.  the same article went up on The Tyee’s website with this headline:

LSD as Therapy? Write about It, Get Barred from US

BC psychotherapist denied entry after border guard googled his work.

After the local press read the piece on the Observer and the Tyee, reporters barraged Feldmar with interview requests.  He appeared on local television and radio shows and the story was picked up by over 50 blogs who reprinted sections of it.

“I trusted my story with the Vancouver Observer,” Mr. Feldmar says, “and once it was out, I was besieged with calls from other media outlets.  I had to decide who I would talk to and who not.”

The Globe and Mail came out with their version of the story on April 25th 2007 after interviewing Feldmar.

A few trips decades ago put an end to this one

Shortly after this, The New York Times has a reporter call Feldmar and published their own article on the story:

Andrew Feldmar, a Vancouver psychotherapist, was on his way to pick up a friend at the Seattle airport last summer when he ran into a little trouble at the border.

A guard typed Feldmar's name into an Internet search engine, which revealed that he had written about using LSD in the 1960s in an interdisciplinary journal. Feldmar was turned back and is no longer welcome in the United States, where he has been active professionally and where both of his children live…..

On August 20th producers remixed the story again and it appeared as the first of a series about law enforcement entitled “Nailed ‘Em” and was viewed by 1.3 million people.

The Daily Tube reported it like this:  “The Colbert Report introduces a new segment, "Nailed 'Em," that highlights our law enforcement success stories. Up first is the saga of how a Canadian drug lord, er fiend, er occasional user, er guy who dropped acid a couple of times thirty years ago, will no longer be allowed into America to visit his son. Our country is now safe from Andrew Feldmar, an "internationally respected" psychotherapist who had the gall to try LSD in the 1960's and write about his far-out experiences in an academic journal. The professor's long, strange, trip now ends at the border, thanks to an incredible new crime-fighting weapon known as Google. Go ahead kids, turn on, tune in and drop out...just know that you'll never return from the outer-edges of consciousness known as the Great White North.  A blog that followed the Colbert Report remarked on it with an excerpt from the VO/Tyee article.

What became of Feldmar since then?  Did the doors of the US swing back open as a result of the publicity?

“As of now (September 22, 2009) I am hoping against hope. Kierkegaard thought that hoping for something that’s possible is easy,” Feldmar told VO. “Hoping for something that’s impossible, is truly a mark of the human spirit. Well, I am still persona non grata in the USA. The US Consulate in Vancouver wouldn’t give me a hearing, but directed me to TRIP (Traveler Redress Inquiry Program) to be found on the DHS website. I complained that I never should have been detained and barred, and received a letter this June, informing me that the only way is for me to apply for a Waiver, which I have refused to do right from the time I was turned around at the border three years ago.

Applying for a Waiver is expensive and basically I have to prove with letters of reference, that I have been rehabilitated. Rehabilitated from what? I am waiting for someone to see the arbitrary injustice of a paranoid defensive bureaucracy. I hope someone will reverse the decision, so that I can visit my children, both of whom still live in the US.

From 1967 on I worked to free people from their habits, addictions, despair and paranoia. I am now involved with MAPS in the first Health Canada approved clinical trials with MDMA, used as an adjunct to psychotherapy with traumatized people. I’ve worked over 40 years with people as a psychotherapist. Perhaps to acknowledge my relentless good work, the US will grant me on my 70th birthday. With an apology.”

On the other hand, Feldmar remarked that the publicity had resulted in something significant for him.  “As a result, Rick Doblin, President of the Multidisciplinary Association for Psychedelic Studies (MAPS) asked me to do MDMA research with Health Canada permission, with Ingrid Pacey, now underway.”