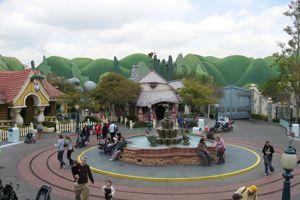 "How much for a two day pass?"

"Three hundred and sixty-seven dollars, and that gets you into both parks," the cashier said, flashing a made-in-Disney smile.

"I only want to go to Disneyland," I said. "How about if I buy tickets just for Disney, for two days."

I looked from my eleven-year-old to my five-year-old and wondered what it would cost me to change plans. We could drive to Joshua Tree and enjoy the desert wilderness and the brilliant sun. Cactus, too. Just for the price of gas. Would they weep as they recounted the moment to their therapists later, the moment their mother had substituted a hike for a dream. Had taken away their cotton candy and told them to eat rocks?

I handed the clerk my credit card.  "Hopper," I said.

They called it "three hundred and sixty-seven dollars," but I could have called it five facials and a foot rub. One plane ticket from Vancouver to New York. A weekend at Harrison Hot Springs. Savings.

I recalled that I had made the decision to bring them to Disneyland out of Christmas-seasoned guilt, the effort to compensate for the fact that they came from a broken home by giving them an outrageous kid-style pleasure that I wouldn't have considered under normal conditions. It had been only a fleeting dive into holiday darkness, but by the time I resurfaced, the tickets had been bought. They were nonrefundable, like the promises I'd made about the fun we'd have exploring the rides in the California sun.

The computer spit out a curve of numbered paper. Resigned, I signed.

Music filtered from loud speakers. I recognized "The Streets of New York" and "A Bicycle Built for Two." Heavy on the banjo.


Through the security check, we found a long line of people leading up to the entry gates. It was 9 AM and the park opened at 10 AM.


I sank down on the ground and looked up at the sea of distinctly American asses.

To the left of the entry gate, a fleet of strollers, conventional wheelchairs, and motored chairs stood under inspection by an extremely large man who selected the motored vehicle. He placed his bag in the basket at the front of it and drove himself over to the line.

I got out pens and paper. I drew pictures of us as we had looked in the airport the previous day in the Photo booth movies we had made, our faces distorted into shapes that Diane Arbus would have found experientially challenging. We laughed until we cried and then I drew more.

Despite the fact that we had an hour wait, hundreds remained on their feet, shifting uncomfortably, as if unable to defy some unspoken corporate law.

My kids kept laughing as I drew different distorted versions of the three of us. People continued standing. Every few minutes my younger son asked how much longer. Fifty minutes, forty-seven, forty-two. Time stretched in "how much longer?" increments until the gates to Disneyland opened and like eager sheep we trotted towards the feed. Around us, the world had turned TV-Technicolor.

We attempted to walk on the sidewalk but a jowly, gray-haired Disneylander in uniform snarled, "Do you have passes?"

"Then you can't walk on the sidewalk."

"Where should we walk?" I asked.