Two weeks before Christmas, ten young people were gunned down on the streets of Vancouver just one block from where our Mayor and his family slept. Eight of the victims remain hospitalized with two in critical condition.

While the retorts from the angry shots that rang out that cold, dark night have long since died away, aftershocks from that horrifying assault continue to reverberate throughout the city.

Several years ago, Jared Diamond published Guns, Germs, and Steel, a Pulitzer Prize-winning examination of the environmental advantages that allowed Eurasian civilizations to dominate, and in many cases decimate, other cultures across the globe. He attributed that dominance to three natural advantages he summed up as Guns, Germs and Steel.

I would argue that much the same kind of struggle is being played out on the streets of Vancouver today, but in this case the invaders are Gangs pouring over our southern border from the U.S.; their Guns — AK47s, machine guns and assault rifles — the weaponry of war; and the Germs they are spreading — violence and corruption — are infecting our youth and destroying the very fabric of the city we grew up in.

I am unable to recognize my own city when ten young people are gunned down on its streets.

I was born in Vancouver General Hospital in the 50s and grew up in rural south Surrey. Like most of our neighbours, we kept a .22 gauge rifle in the garage. Now, you can hunt small game with a .22, and I suppose you could also wound someone, but a .22 would be no use whatsoever in a gun battle.

That's why the illegal guns flooding into our peaceful province aren't 22's, however. They are illegal submachine guns, assault rifles and unlicensed handguns. And the gangs in Canada so eager to use them are aided and abetted by lax federal and state laws in the U.S. allowing anyone to walk into a gun show in Washington state (or any other state) and walk out loaded with assault weapons, machine guns and ammunition.

Representing 500 American cities, Mayors Against Illegal Guns found that states with the weakest gun laws are also the top suppliers of guns recovered in out-of-state crimes and the source of a greater proportion of trafficked weapons.

In cooperation with police departments across the country, the Mayors' group identified ten laws proven effective in combating the scourge of illegal weapons. Washington state, our nearest neighbour, has only two of those laws enacted, Montana just one and Idaho none.

Guess where the illegal AK47s sold at Idaho's unregulated gun shows end up?

Canadians have watched in horror as one of our favourite holiday destinations, Mexico, has endured repeated paroxysms of gun violence. In a report released this past September, the Mayor's group found that 75% of the weapons used in crimes in Mexico originated in four bordering American states. More concerning, the time lapsed between the original sale in the U.S. and the recovery of those guns at Mexican crime scenes is decreasing, a sign of ever-more sophisticated gun trafficking.

The same catastrophe is now playing out along our southern border, infecting Canadian cities with a growing plague of violence that is fast eroding our way of life.

I lived in the U.S. for twenty years, married an American, and have many relatives and close personal friends there. But it's time that we face up to the ramifications of living next to the largest arms dealer in the world, a more violent country that tolerates the shooting deaths of 35,000 of its own citizens annually. 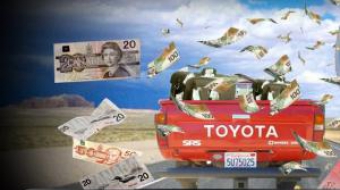 Is PAVCO's proposed mega-casino at B.C. Place too big to fail? No!!!!

Just picture it. We did. Cash from the proposed mega-casino at B.C. Place, heads down I-5 to the Las Vegas-based Paragon Gaming as revenue. The sleaze stays here.
Sean BickertonFeb 12th, 2011
Speak up about this article on Facebook or Twitter. Do this by liking Vancouver Observer on Facebook or following us @Vanobserver on Twitter. We'd love to hear from you.