There's no such thing as too much cheesecake 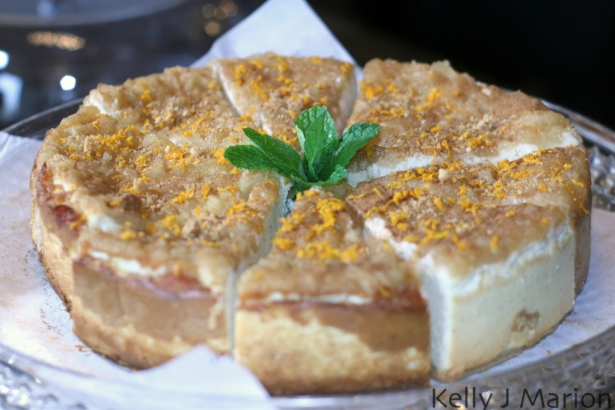 Photos by Kelly Jean Marion -- follow her at @kellyjean237

Cheesecake: A dessert so delicious that even the lactose-sensitive can’t resist indulging in it from time to time.

Some like it classic, while others prefer to be adventurous in their flavour combinations. Whatever your preference, Van Foodster’s Cheesecake Challenge has something for you. With 13 restaurants and bakeries participating, the options are limitless and include decadent chocolate and fruity creations, as well as savory and sweet combos. There’s even one with your favorite ever-so-versatile protein, bacon.

I went on a media tour with a dozen other food writers, TV personalities and industry professionals, including the eccentric Cassandra Anderton, the lovely photog duo, Sean Neild and Alvin Lee, and the sweet-as-pie Alyssa Dawson.

Our first stop of the day was at Gramercy Grill where we sampled Chef Dennis Huang’s Strawberry Cheesecake. 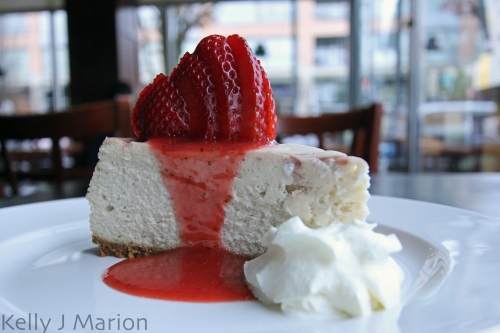 This cheesecake is “simple” as explained by Chef Huang, but its simplicity is nothing to shrug off. In fact, because there isn’t much going on, you are able to focus on how smooth and creamy the cheesecake is – not overwhelmingly sweet even with the strawberry coulis pouring off the sides.  The fresh strawberries are a nice touch visually while also making me feel less guilty about eating the whole slice…sort of.

"I tried to make it simple, because not only did I have to cook it, but everyone else had to cook it. The base is just cream cheese, and a very tiny bit of sour cream, sugar and...strawberries for the coulis. I think the graham cracker crust is not too bad for flavour - it's made with graham cracker, butter and a little salt."

The only thing that needs some work on this bad boy is the crust, it may be tasty on its own, however it was far too weak next to the uber flavorful cheesecake. It needed to be twice the height, with a more intense graham cracker taste to stand up to the rest.

The fruity cheesecake was paired with a sparkling raspberry cocktail garnished with strawberries.

"Because it's strawberry cheesecake, I've pre-frozen some raspberries as a garnish/ice cube and covered that with a little bit of Chambord, which is a raspberry-based liqueur, to add some sweetness. I've paired it up with Confidence Rosé from 8th Generation here in BC. It is a brute to off-dry so it's not super sweet it is dry, the Chambord should sweeten it up just enough to pair beautifully with the cheesecake, enough so that they both shine."

At this point I abandoned my bike, foreseeing that after three cheesecake samplings my pace would decrease dramatically and I might not make it home.

Our second stop of the day was at Salontea, an adorably vibrant tea and baked goods shop on South Granville.