Not the best for your waistline, but great for your taste buds. 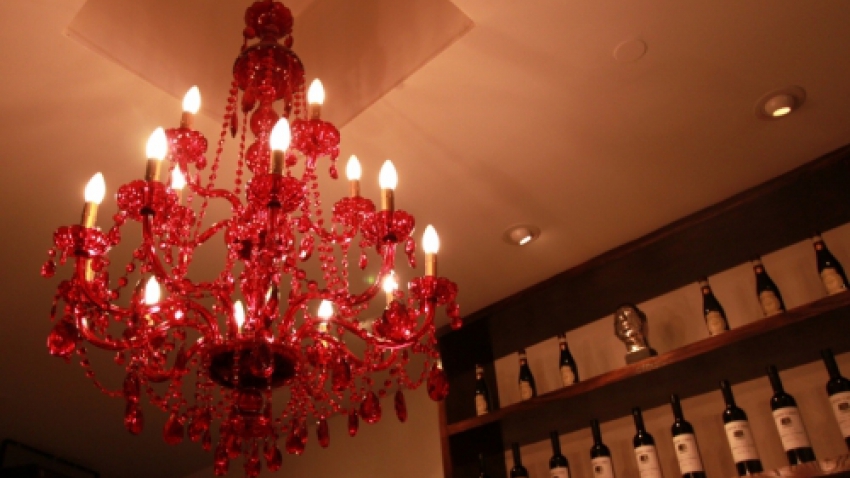 A multi-sensory experience. Isn't that something we all strive for?

At Taste Resto-Lounge that is their primary goal, from local art and eclectic music to flavourful sharing plates and carefully crafted cocktails. 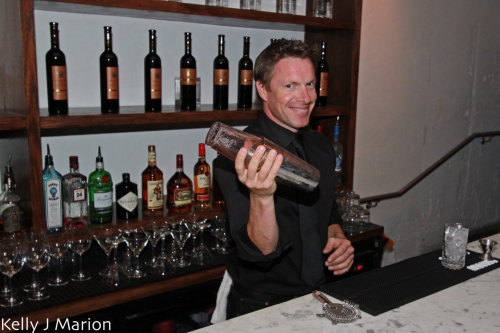 Renaldo Decembrini, Taste's Executive Chef, found himself in the kitchen at a young age cooking alongside his "Nona Maria." It was from her that he grew a stubborn infatuation for finding the essence of each ingredient while using only the best in local and seasonal foods.

It's because of Renaldo's upbringing that 80 per cent of the ingredients used at Taste Resto-Lounge are sourced locally.

"We want to provide people with an exceptional experience without harming the environment. We have spent a lot of time on the finer details - we will be using locally-sourced maple serving boards and cheeses, 100 per cent biodegradable napkins and quality, organic ingredients whenever possible," explained Renaldo.

They also use Ocean Wise certified seafood which is, for good reason, a growing importance to many chefs and diners these days.

Looking at their menu and smelling the smoky aroma that was enveloping the room it was hard not to lean towards the meaty dishes rather than the seafood.

To showcase Renaldo's approach to cooking, as well as the restaurant's attention to their guest's appetite, it is routine for the staff at Taste to bring out an amuse-bouche of the day. That evening it was a freshly smoke capicolla with a smoked chevre. I almost didn't recognize the chevre as it was a firm variation to the usually soft and spreadable cheese that I'm used to. From the scent to the taste this is was a delicious start to the dinner and a great way to get me amped for what was to come. 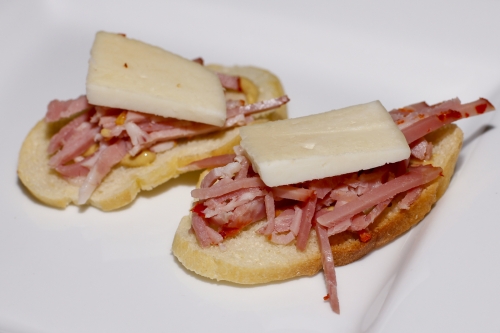 We were still humming and hawing about what we wanted, with the thought process being slowed down as we enjoyed the amuse-bouche. That taste of meat solidified the fact that we were feeling carnivorous and craving cheese to go with it.

They were out of the smoked beef tenderloin which was a bit of a downer, but there is no shortage of meat on their menu. Our final decision was the Hand Crafted Bacon Chutney, Pear and Brie Stack, the Lamb Pops and the Grande Plus Charcuterie Plate. 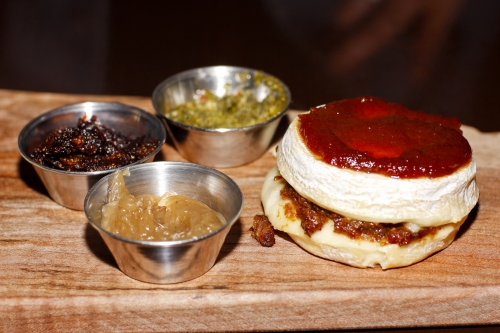 The hand-crafted Bacon Chutney, Pear and Brie Stack was accompanied with fig compote, sticky onion marmalade and chimmichurri. The pear is subtle when your bite is a double stack of brie with bacon, but it is a nice touch of sweetness to the savory dish.

Both James and I were fond of the fig compote paired with the brie, as we found the semi-sweet and creamy combination a perfect duo. Its gritty texture was also a nice contrast to the smooth texture of the full fat cheese. Chimichurri, if you don't know, is a spicy, vinegar-spiked, pesto-like condiment from Argentina. Taste's version of this was flavourful and heavy in pesto flavour rather than vinegar or spice; it also paired quite well with the dish. The marmalade was my least favorite of the three.

This is a rich dish that can easily be gobbled up by two people but should be followed by meat dishes rather than a charcuterie and cheese plate as it is a bit overwhelming otherwise. This was our mistake. 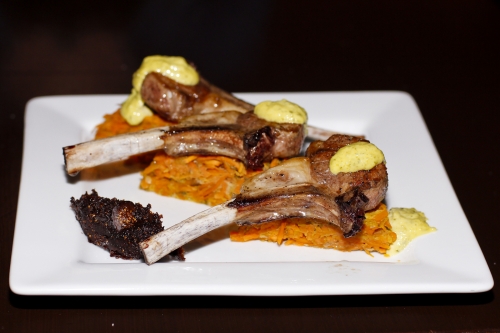 The Lamb Pops sat atop yam fritters, were spotted with gherkin aioli and paired again with the fig compote. The fig compote paired less with this meal as it did with the cheese so we ended up stealing it off of this plate and using it with the brie. The firm, stringy texture of the yam fritters was unusual but tasted delightful with the lamb. I felt that the lamb was slightly over-cooked since we requested medium rare, but with such a small amount of meat on the bone it was less noticeable, especially since it was still quite tender. The aioli was the perfect finish to the dish and would've been nice with a touch more.

To accompany this dish, I decided to try out one of their "bespoke" cocktails. According to the menu the Lost Addiction Cocktail paired well with it so I decided to give it a go. In it was Jameson Whisky, Pont de mus, spiced ginger peach puree and fresh mint. The dominant flavour was definitely whisky. 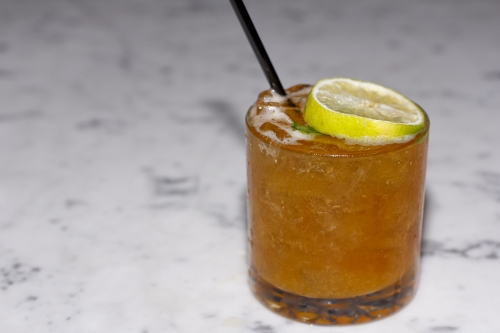 Unsure of how much food we were actually ordering, and feeling quite peckish we had decided to go for the Grande Plus charcuterie plate. On it was poached soft shelled crab, smoked oysters, two tartares, capicollo, Salt Spring and local artisanal cheeses, drunken mushrooms, spiced pesto, duxelle with love, and hand crafted bacon chutney. 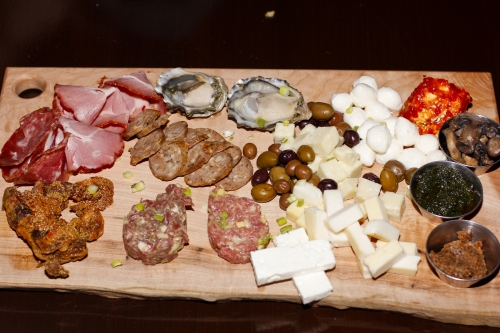 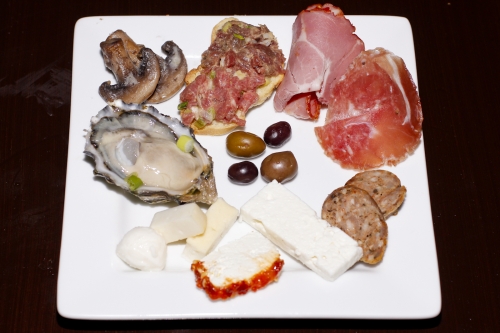 After eating the whole brie wheel, the cheese was a bit much for my stomach to handle. The chili pepper was, as expected, very spicy, the feta very salty and the parmesan dry and robust. These three cheeses tasted best on a cracker while the bocconcini and smoked gouda feta were nice just on their own or on a piece of meat. The sausages were my favorite for this.

I loved the drunken mushrooms and the smoked olives, finding them a nice break from the lusty components that shared the plate. Not a huge tartare fan, but having still tried quite a few, I felt the tartare needed a tad more salt. Renaldo had mentioned that he likes the essence of the food to come out, so this probably explains the lack of seasoning.

The spiced cornmeal soft shell crab was neither mine nor James' favourite portion of the massive plate of charcuterie and cheese. It was weird to eat the shell of a crustacean and maybe, like many things, is an acquired taste. You can order this as a sharing plate as well if you so desire.

After dinner, I opted for a liquid dessert-- the Fourth Wheel Cocktail. This bright red beverage was made up of Absolut, Lillet, house-made black pepper, egg white and raspberry syrup. The raspberry was the dominant flavour in this cocktail while I didn't notice the pepper at all. 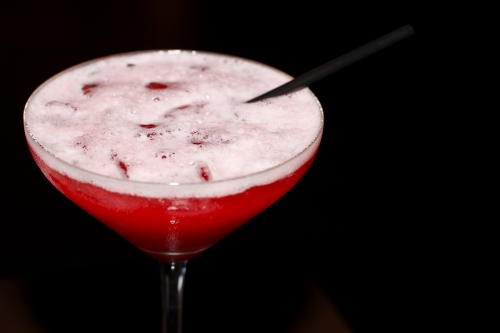 For the full drink and food menu (other than their daily specials) check out their menu.

The restaurant opened September 21st with a media party a few days prior to sample a few of the menu items and feel out the environment and atmosphere. Since they have rotating art collections the decor on my second visit had changed slightly, but the dim lighting with candles, the funky, red chandeliers and the local and international music remained the same.