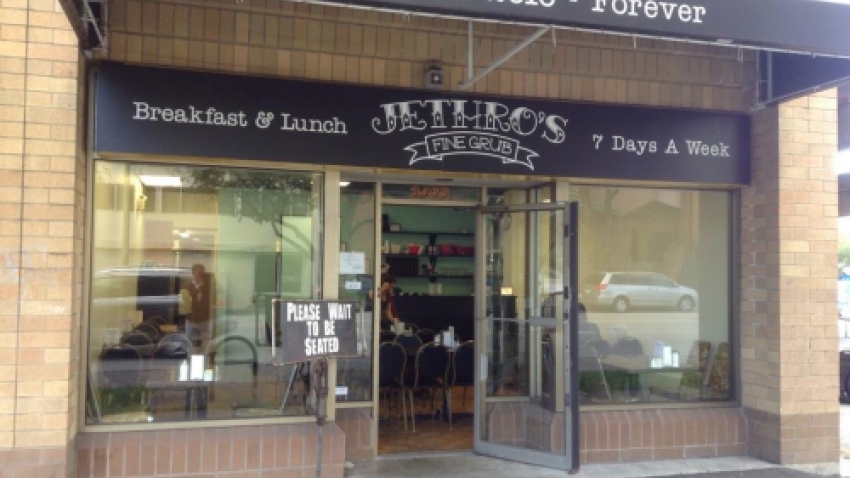 Jethro's Fine Grub has expanded its casual concept Eastward to Fraser Street (3455 Fraser St). I have heard good things about the original Dunbar Street location (3420 Dunbar St), though it seemed too far west for a visit. Jethro's was featured on The Food Network's program "Diners, Drive-ins and Dives" (of which I believe they are very much the former) yet despite that sort of recognition and media attention their recent expansion has gone relatively unannounced.

I went to their Fraser Street location for a late brunch on a Friday. Only a few tables were occupied which worked out well as I have heard the line-ups to be insane. The room is pretty sparse, unremarkable even. There's a sign up advising customers that its cash only. Fine on both counts for me. The air conditioning was turned up full blast to the point where it was almost chilly.  I feared for how quick the food would lose temperature.

I ordered a Benny hybrid of a dish, corn cakes topped with chili, poached eggs and hollandaise. I've heard these guys are doing great things and I was hungry.

The food took ages to come out of the kitchen which seemed to be exaggerated by, and at odds with, the constant pinging and clanking of the microwave which was clearly audible from where I was sat. What the hell are they doing back there?  When the dish did appear it didn't impress.  Split hollandaise, not grainy and over cooked but the butter was seeping out and not held in the emulsion. What would cause that? Undercooked sabayon? Lazy whisking wrists? Too much time at the pass ? Why wouldn't a diner be able to make hollandaise properly? So many questions. The home fries were uniformly golden via the deep fryer and the corn cakes were a touch dry. The chili was so - so. One egg over poached, one not quite as bad. The kitchen came halfway to making this dish dish properly.

I witnessed the cook chatting with the server. He was a strange looking guy with a heavily pierced face, long proto-dreadlocked hair and the obligatory East Van beard. As he turned to face the room I couldn't help but notice the right side of his head and face was shaved bald, beard included. It was obviously to the fellows liking and, I would wager, done with his full consent.  I know that cooks can be a gnarly bunch and yes this is East Van and I hate myself for judging, but guys, seriously?

As I was paying the bill they were very disorganized. I had obeyed the sign and brought cash. I'm doing my part of the bargain here. Why haven't they got the cash float ready? That's the only form of payment they accept! The server had to dig through her own purse to get my change.

It's a neighborhood which has lots of potential in the dining department and could be the next eating out frontier. A good value, casual place such as this should be the perfect fit. I really wanted to dig it, honestly I did, but it lacks the character, quality and magnetic pull that makes you want to return. I must confess that I don't want to give a new independent restaurant a hard time, especially not to the barber-challenged young cook. I will be returning to see if they can balance out the experience for me, but i was expecting better from them.

@VanObserver Went to the location on Dunbar once and the food and service were not good. Avoid. 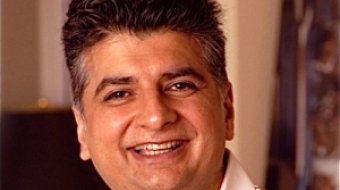