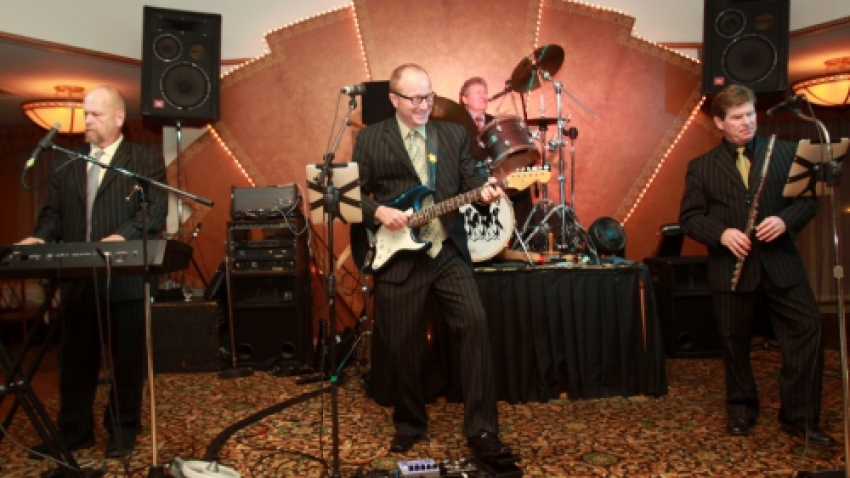 Whether spending a night at the Harrison Springs Resort and Spa or staying in a nearby hotel there is no denying that The Copper Room is a restaurant worth eating at. It has built up a name for itself not just from the exquisite food but from the atmosphere it presents with it's nightly live music and glowing dance floor. 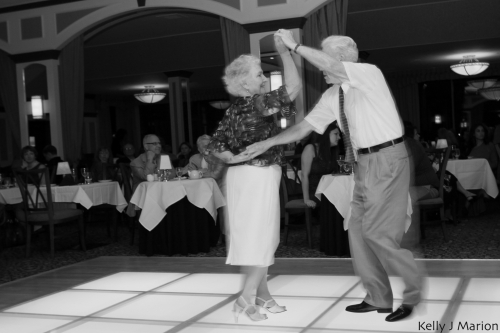 Four year olds to 84 year olds were dancing to cover songs by the Jones Boys before, during and after our dinner. Many were celebrating a birthday or an anniversary, including Tom and Mabel from Mission, who were there for their 60th anniversary. As they twirled and side stepped across the illuminated dance floor it was hard to not be entranced by the love that enveloped them after so many years. I spoke with them after dinner, and asked why they chose The Copper Room as their place of celebration. They told me that they had been at the restaurant for their 50th anniversary so it felt right to be there again for their 60th, while mentioning that it was their son Gary Wilson who gathered everyone together for that special night. 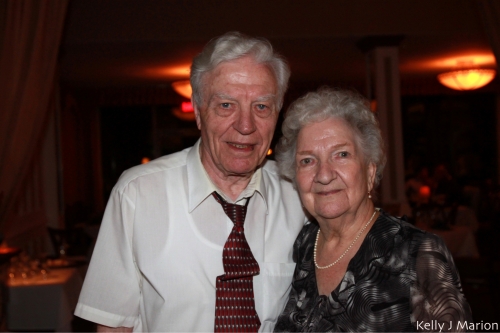 Through correspondence with Gary I found out that his parents have been going out dancing for many years and that they are quite proud of it,although they behaved quite humbly when I told them how great they were.

In 2007 we returned to my mother's hometown, Blackpool, England. They had a fantastic time dancing in the classic ballroom there that my mother had danced in as a girl in the 30's and 40's.

Meeting Tom and Mabel and watching the many couples and families celebrate birthdays and anniversaries is what makes The Copper Room so unique. I have never in one night seen so many celebrations and congratulations from the band while eating dinner at a restaurant.

While the entertainment and good vibe in the room was a major draw there's something to be said for the food served at the restaurant as well. Having the option of ordering a la carte or the table d'hote we opted for the table d'hote allowing the Chef to take us on a gastronomical journey that evening. 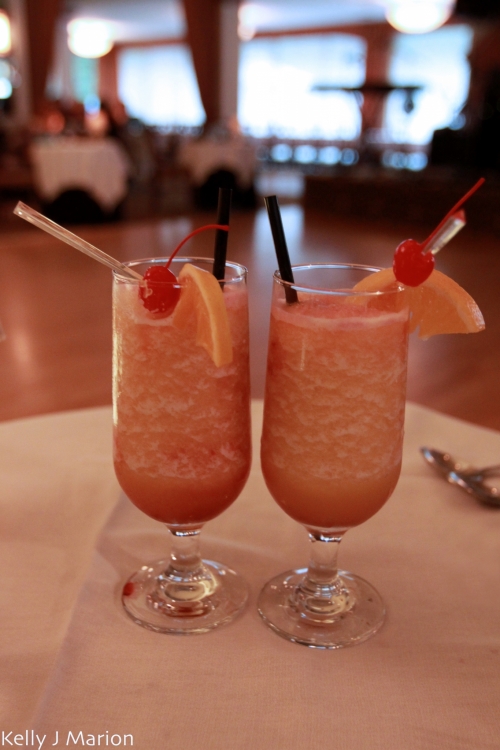 As we waited for our first course we sipped on some of The Copper Room's bellinis (shown above). Although not made traditionally and in the slushy form we were pleased with them, not too sweet but sweet enough and the middle ground between too frothy and too icy. 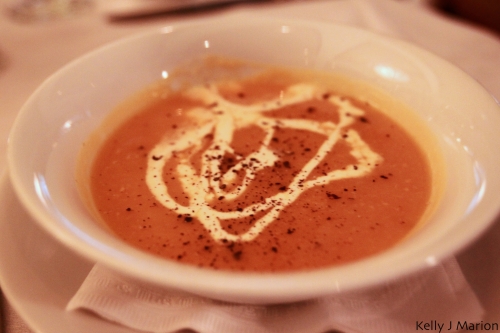 The soup wasn't necessarily a great choice for the summer season as I feel it's generally more of an autumn soup, but my attitude quickly changed after a few spoonfuls. It was creamy, rich and the perfect combination of both sweet and savory. 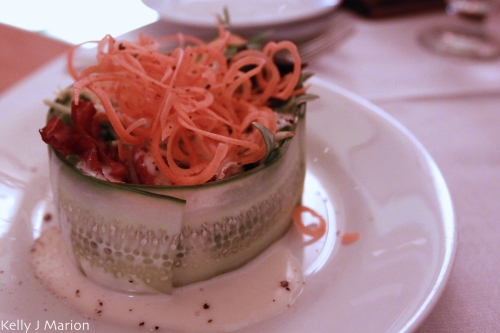 The salad gains full points for presentation even if being in a cucumber ring is not the easiest way to eat a salad. The lemon poppy seed vinaigrette has a nice citrus touch that isn't overwhelming but offers a nice zing while the consistency is creamy but still light. 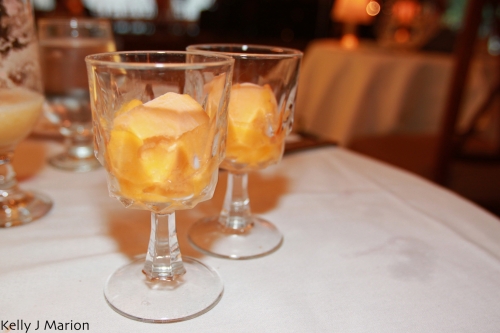 Very rarely are you given a palate cleanser even at some of the highest end restaurants in Vancouver, so this was a refreshing treat. Not only did it do the trick to prepare us for our next course but it was tasty enough that we could be tricked in to thinking it was time for dessert. 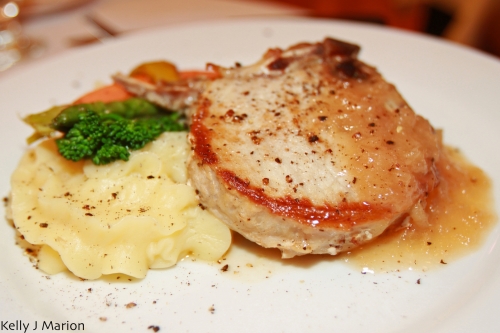 The pork was fantastic; tender and juicy with the sweet chutney bringing out the saltiness of the dish. The accompanying mashed potatoes were smooth and salted lightly. James enjoyed them while I thought they needed some garlic or more butter to add a little bit more flavour. The vegetables were cooked but still crisp and vibrant, as they should be. 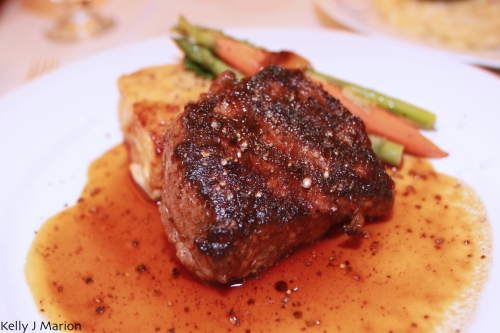 The steak was cooked a little more than I would expect a medium rare to be and tasted like a tougher cut than a striploin but it did have a nice smokey taste from the grill and was extremely juicy. The madeira demi glace was packed with flavour with the wine thinning out the thick demi glace and complementing the meat well. The side of scalloped potatoes was to die for; loads of cheesy cream, with potatoes cooked tender but still identifiable as individual slices rather than just a blob of starch. It did seem odd though that the scalloped potatoes were matched with the steak and the pork with the mashed potatoes. 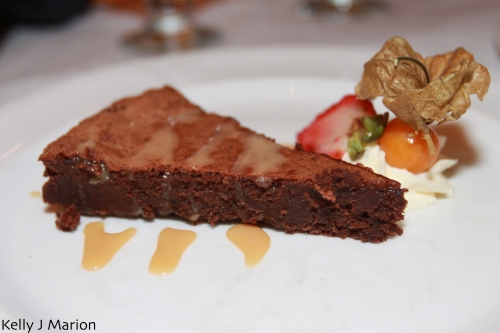 Chocolate Hazelnut Praline with Caramel Sauce (no hazelnuts this time)

This dessert is the perfect portion for the richness of the praline. Being told that they were out of hazelnuts almost deterred me from ordering it but I was glad that I went with my gut and still did. Despite not having chunks of hazelnut in it there was still a nutty flavour to the dessert that made it taste like a glorified hedgehog drizzled with caramel. 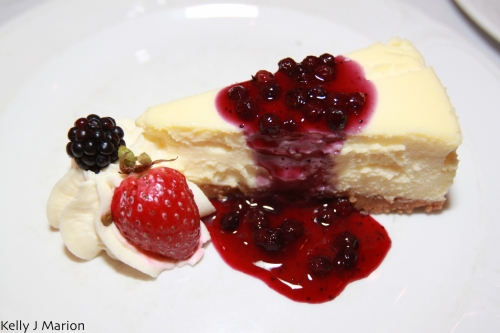 Not the best cheesecake I've had and a bit skimpy on the delicious compote but it was still creamy and thick like you would expect a NY style cheesecake to be. It was tasty but a pretty standard cheesecake.

It is obvious that the Chef is familiar with what flavours pair with others, as shown in all of his dishes. The presentation is fairly average and the a la carte menu is a bit pricey, but nothing a Vancouverite wouldn't understand. The portion sizes for the mains are appropriate for the price while the appetizers and desserts are a bit small. I suggest the seasonal table d'hote as an option that will leave you satiated but not too full and is definitely worth the price. Plus, it narrows down your choices.

The Copper Room is a restaurant offering a full experience with an upbeat atmosphere and live music seven nights a week, featuring the quirky Jones Boys from Tuesday to Saturday.

If you're in the area whether staying at the resort, camping at Sasquatch Provincial Park or just spending the day at the beach, The Copper Room is a great choice.

For more information on the restaurant check out the website.

For more high resolution photos check out my Harrison Springs and Copper Room set on Flickr.