A street cart with a conscience, event if doling out poutine after poutine. 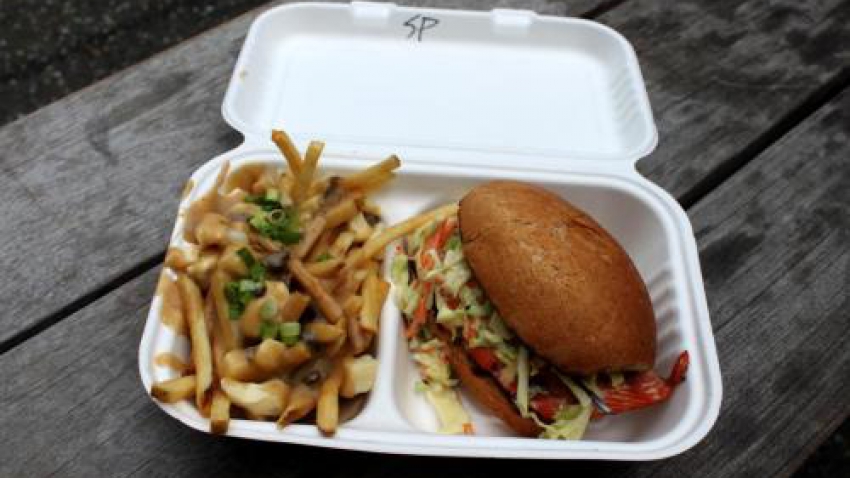 Take a stroll through Portland, Los Angeles or New York and you`re likely to find a row of street carts serving foods from every ethnicity and patrons happy to support them. Vancouver seems to be leaning in this direction and as of May 1st, there are an incredible 103 food carts on Vancouver’s streets, with plans of another 30 carts in the next two years. Thanks to city officials repealing the 1978 law that allowed only hotdogs, chestnuts and popcorn to be sold from street food carts, this is possible and we’re offered a wide variety of cuisines on the go.

You would think then that the competition would be incredibly high and there would be butting heads, but many of the food cart owners feel that it`s more of a community than anything else.

Andrew Fielding, owner of The Kaboom Box, explained this in a past interview. "By and large, there is a great sense that we’re all in this together. The way I see it, we all have the challenge of making street food in Vancouver a more viable food option, so our fortunes will rise and fall together. The more good experiences people have on the street, the more likely they are to come to each and every one of the vendors."

I thought that his philosophy was admirable and it piqued my interest in food carts, making me increasingly drawn to them as I walked Vancouver`s busiest streets. When I was offered the opportunity to review The Kaboom Box with VanEats.ca's package Kaboom in a Box, I decided I`d abandon my tradition of dine-in restaurants and explore what they had to offer. 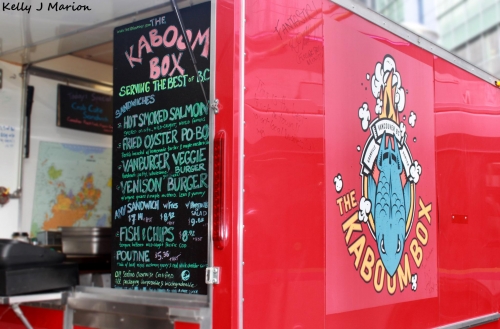 The package was small, and consisted of only a few items, but was also a great deal at only $8.50.

I was wary of the po'boy because I've had some pretty fantastic ones in New Orleans, the haven of deep fried deliciousness, and even verbalized this to Andy as I stood in front of the cart. In response I noticed a look between Chef Brian and Andy, and almost in unison a "well, ours is very different from theirs." Unsure as to what this meant but appreciating the fact that they embrace their own approach to food, I took it for it was worth. At the same time I was hesitant on a fish sandwich as I`ve been to some pretty acclaimed restaurants and have never been satisfied when ordering one. That said, I had to make a choice, and since there was a line forming behind me, I had to make it quick. I opted for the Salmon 'Salmwich' because my stomach can only handle so much deep fried in one day.

My order was placed and within minutes I had a good sized filet of salmon sitting atop a toasted whole wheat bun. They already had my vote in their favour because I love a little crunch in my bite, as well as anything that has the smoky right off the grill flavour. 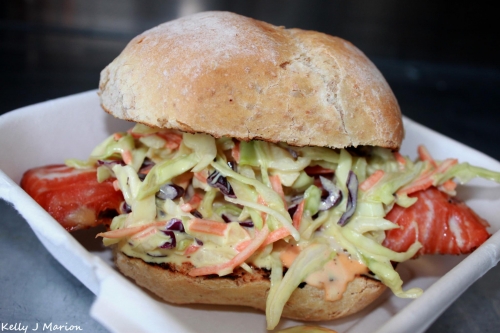 Their salmon is local, wild caught, and Oceanwise certified and you can taste the quality in every bite. This particular filet was cooked until done, but not overcooked and flaky dry. Throw a few toppings on it and the moisture that was removed when cooking is added back twofold. It says with a touch of spicy mayo, but that doesn`t mean they`re skimpy and there was enough to add a good flavour to the dish. If you don’t like mayo, you could ask for it without but it would lose the overall taste. I suggest tricking your mind to think it’s not mayo as due to their spices it can easily be mayo incognito. Add to the “Salmwich” some of their house-made maple-mustard slaw and you’re in for a messy and delicious burger. 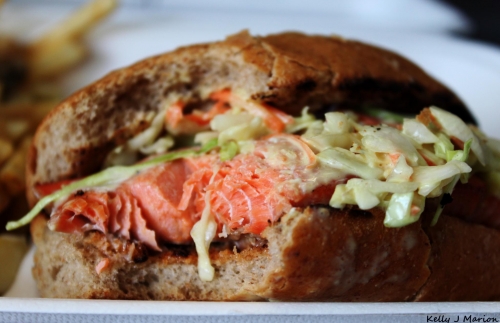 My only complaint for the burger was the fact that they ran out of their regular buns and had to use alternative ones. Andy apologized profusely and seemed a little ashamed that they had to serve it on anything but the best, but since it was nearing the end of their busy Friday I let it slide. Calabria Bakery, on Victoria Street, normally supplies The Kaboom Box with the buns for all of their sandwiches. There`s nothing quite like a fresh made bun and for many people, myself included, the bun is as important as what goes inside. Give me a cheap, generic, supermarket bun and dress it up with delicious toppings and high quality fish or meat, and I`ll still feel like I`m eating a sandwich from 7-11. Andy likes supporting an independent business and has been more than satisfied with the quality of the bread they`re supplied. I think that many people in Vancouver will agree with his decision to do so, after eating one of his burgers or sandwiches. Once you eat bakery bread, it’s hard to go back. 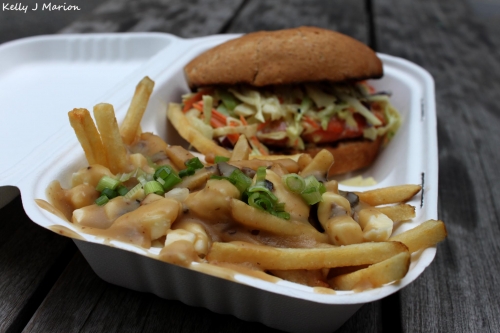 Deep fried potato fingers, thick, salt-induced gravy and big chunks of cheese curds. This could only describe one dish, a candidate for our National food, the poutine; french fries meant to be ate with a fork. The dish is hot, greasy and a heart attack waiting to happen, but there`s no denying that it`s a crowd favorite. Hell, it`s all the rage right now with the current poutine challenge. Almost every restaurant has some sort of twist on it now, whether high end, or street cart. The Kaboom Box is one of those street carts that offers it, but like other restaurants it is unique in its own way. Their poutine uses mushroom gravy rather than traditional gravy made from meat juices, or if really cheap, gravy out of a packet. Regardless of the alteration it`s still not something you should probably eat every day, but when you do, why waste it on the crappy stuff?

Alex, a fellow diner, decided that the gravy tasted like European gravy. I believed him because I never had it when I was in Europe, despite being there for 4 months. That and the fact that he seemed to be on his own little poutine challenge, sampling Cosca`s poutine the day before. 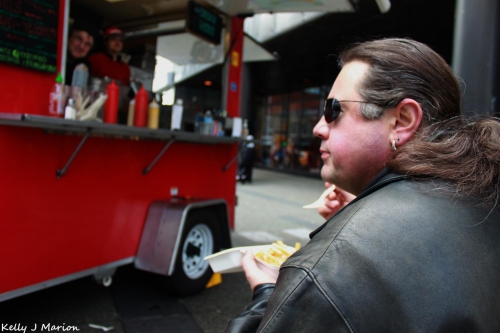 When I asked him to explain, he described it as being similarly thick, and having a more natural, and less processed taste, like you would find in many quick-eat establishments or unconcerned restaurants in Vancouver. This seemed like a fairly obvious observation, but the comparison made to European poutine made me think that we’ve been doing it wrong all along. This is a flavour I would definitely opt for if given the choice, especially since there were chunks of local mushrooms swimming in the gravy, rather than pieces of turkey skin. It`s vegetarian friendly, so everyone wins. Even thinking about it makes me think it's healthier than it is, even if it's atop deep fried french fries.

The batter on the French fries was thin enough that you could mildly taste the potatoes, but prevalent enough to have a flavor of its own. Normally I don't like stringy fries, opting for chunky fries where you can fully taste the potato, but I was pleasantly surprised at how these were done. They stood up against the gravy and cheese curds, making it a quartet of hearty flavours, if you include the diced green onion topping.

The cheese curds that are used on the poutine are the only item that weren’t locally sourced in my meal, but as they came from Quebec and were fresh and as squeaky as they should be, I wasn’t about to complain. 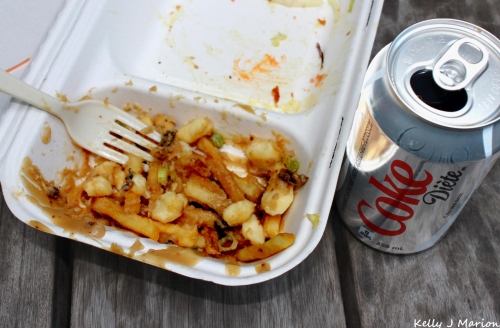 Although delicious to the very last bite, I don't think the poutine is something I could eat on a regular basis; I care too much about my heart, and my waistline (note the diet coke). I had intentions of bringing some home with me, or getting a friend to swing by to help me eat them, but then realized that I didn't want to share and despite being full I wanted every last bite in my belly.

This gluttonous behaviour left me feeling a tad over-satiated and ready for a nap. Fortunately, being out in the crisp, 10 degree "spring weather" with ominous looking clouds above and the feeling of rain on the horizon, snapped me out of it. With the diet coke to boost the caffeine in my system and a bike ride home which got my blood flowing to my limbs again rather than just my stomach, I was fully lifted out of comatose. Oh, the joys of eating in the street!

Before leaving I asked the men of The Kaboom Box, Owner Andy, Head Chef Brian and “New Guy” Matt, if they ate Kaboom Box every day, but they stated that they tried to limit it to once a week. 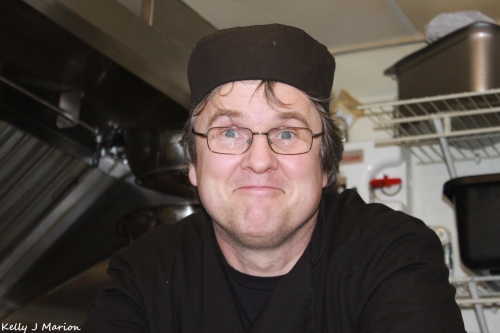 I agreed with that method because who wants to get sick of the food one’s serving Monday to Friday? Andy said sometimes he doesn't eat at all but he did chow down on a salmon sandwich with me, maybe to appease me, or maybe because he was envious of what I was eating.

In addition to their tasty and sustainable food choices, I appreciate The Kaboom Box’s commitment to using biodegradable and compostable packaging. This is important if you’re going to be a food cart, because you don’t have the luxury of serving your meals on porcelain plates.

The Kaboom Box was rated one of the best food carts by Vancouver Magazine, as well as one of Vancouver Food Carts you must try in BC Living.  Apparently they’re doing so well that they’ll be opening The Kaboom Box 2 at Georgia and Burrard in the near future.

They've had reviews from people all over the world, including Japan, Chicago and England, so it's only appropriate they would have a neck-breaking world map on the swinging canopy door of their cart. Andy has conveniently put a “You Are Here” arrow for those who were unsure as to where they actually were. Thanks Andy, I'm constantly wondering where I am. 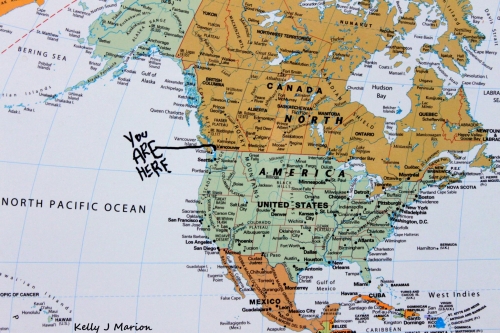 For more photos check out my galllery in high resolution.

To buy a Kaboom in a Box dining pass check out VanEats.ca.