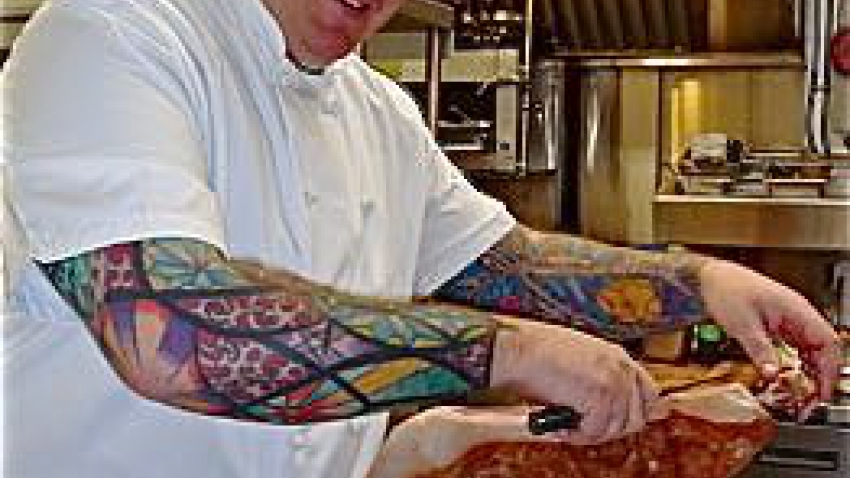 Campagnolo, located at 1020 Main Street, claims a menu of affordable, traditional, rustic cuisine from the Piedmont and Emiglia-Romagna regions of Italy. With the owners and restaurateurs of the award-winning restaurant, Fuel, behind the scenes at Campagnolo, including Executive Chef Robert Belcham, patron expectations are undoubtedly high.

When I called to make a reservation for two, Restaurant Director and Proprietor, Tim Pittman kindly explained to me that Campagnolo only makes reservations for parties of eight or more and that if I was looking to find a table on a weekend night, I should generally avoid the typical dinner time of Vancouver-ites, between 7:00pm and 8:00pm.

With my partner in tow, we arrived at Campagnolo around 8:30pm and were shown through the sixty-five seat main dining space, down a long, wood paneled corridor to the twenty-five seat wine bar room. The room boasts low ceilings with wood and concrete brick panels on all sides, lending a very rustic, casual and warm atmosphere to the space. The wine bar and lone television set make this an ideal room for casual gatherings to watch sports games, while neither is over-powering enough to make the space a raucous affair.

Our affable server for the evening was at our table in no time, menus and suggestions in hand. As neither of us is fluent in the Italian language, we humbly asked our server to explain a few of the items on the menu and without pretense or judgment, explanations were given.

Along with our drinks of white wine and crisp, Italian beer, we were brought a container of long, thin, brittle and cheesy, grissini, an alternative to the usual bread and doubly delicious and addictive. Our server further explained the concept of the menu to us, the idea of share plates of antipasti including albacore tuna crudo and octopus salad with roasted peppers, cucumber and lemon, “the Cure” salami, including dry cured venison sausage and testa cotto, primi of pasta including tagliarini pork ragu and agnolotti with potato, mascarpone and chives, pizza, secondi or main courses including Sloping Hill’s pork roast and line caught ling cod, and lastly, contorni or sides including roasted potatoes and mushrooms with sea salt and olive oil.

While the prices appear to be reasonable, this can be deceiving depending upon what and how you order. My better half started with thin slices of guanciale, known as pork cheek. This cut of meat is very fatty and flavourful and a bit of an acquired taste. We skipped the pasta and focused more on individual choices, as our palates tend to be different. I chose the pizza of Credenza anchovy, olive and wild, pickled leeks.

Our server warned me of strong flavours but I was ready to take it on and I am happy that I did. This trio of salty, pickled flavours, combined with the crisp crust and tomato tang, attacked my craving perfectly. My partner chose the Alberta flat iron steak with salsa verde with a side of soft polenta and Fontina cheese.

While we were both satisfied with the meal, neither of us was overwhelmed by anything but the fantastic, attentive and friendly service. The concept of share plates is popular right now and I heartily approve, but I expected more from Campagnolo. If we are talking of traditional, family-style, rustic Italian cuisine, I would have expected larger plates meant to serve two to four hungry people, considering the price.

With an excellent wine, beer and cocktail list from Sommelier Tom Doughty, I would definitely return for appetizers and drinks, but to keep me for dinner, Campagnolo is going to have to up the ante.

Photo of Chef Rob Belcham carving up the house-made prosciutto