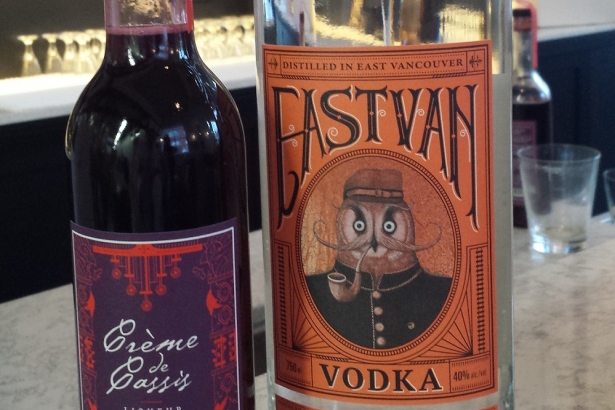 Down on Powell Street, in the shadow of the sugar refinery, sits the newest player in Vancouver’s burgeoning craft distilling scene. Odd Society currently has two products on the market, a vodka and a crème de cassis. And while that represents a very small product line, it provides a clear window into their style.

When you lift the vodka to your nose, you get an unmistakeably malty aroma. It is almost as if someone opened a bottle of soy sauce nearby. As distiller Joshua Beach explains, the reason is that they use a malted barley to make it. The malt comes all the way through, clear and rich on the nose.

As Beach explains, “We don’t scrub it clean. We leave some of the natural oils from the malt and that is what gives it that silky quality in your mouth.”

This makes Odd Society’s vodka a rather unique product. It is made from the same base as one would use for a whiskey. This also makes it a curious product. Gordon Glanz, Odd Society’s founder and distiller, has a penchant for experimentation and, as he and Beach walk through their operation, they describe the different ways that they like to play with their craft.

They talk about experimenting with different yeasts, as well as using malted grain. As their product line expands, they plan on adding the obvious gin (everyone adds gin after they have produced a vodka), but also talk about a white dog style product made with rye, just as any good Canadian whiskey variant ought to be. “We have actually been blending vodkas,” says Glanz. Again, this is something commonly done with whiskey, but less often with vodka.

This is the type of thing that a craft distiller can do, and it is a good example of why we ought to be getting excited about the local craft distilling scene. To see why, let’s revisit the vodka. Almost every craft distiller makes vodka first, because vodka is typically the first thing you can make. It is also the most common spirit behind any bar, which makes it an ideal product to grow a distiller’s brand.

But if we compare the vodka at Odd Society with that you would find at Long Table (the city’s first craft distiller), you find almost nothing in common between the two products. Long Table’s first run of vodka cultivated a strong mineral profile and added a hint of lemongrass. Odd Society has gone the other direction, leaving it a little dirty, declining to scrub out all of the natural flavours, rather than adding character at the end.

Another interesting angle is visible with their cassis. Not only are the currants local, but the recipe comes from Chef Herve Martin of Main Street’s The French Table. It is made, says Beach, from Martin’s old family recipe. Sipping it, the currant is strong, almost as powerful as a sip of Ribena, but the sweetness is tempered. Rather than a cloying, syrupy liqueur, it is downright drinkable, almost like an ice wine.

In the near future, more craft distillers are coming to Vancouver. It is a trend which is only starting to gain momentum. However, as Glanz recalls, Odd Society was over three years in the making, between finding the space, securing the equipment, and satisfying all regulatory requirements. Whiskey, by Canadian law, will take another three years.

So don’t expect a whole slew of craft distillers to flood the market any time soon. Regulations remain antiquated and prohibitive. Let’s hope that some of these barriers diminish when the Clark government completes its review of British Columbia’s antiquated liquor laws.