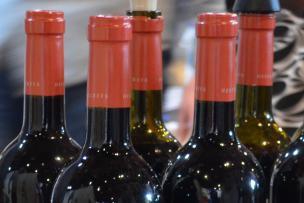 Wine connoisseurs and travel enthusiasts alike were united Thursday at Into the Vineyard’s Wine and Travel event.  A myriad of over twenty international wineries were showcased ranging from BC’s Okanagan region to exotic locales including Spain, France and Chile.  Taking place at the Yaletown Roundhouse Community Centre, the event was hosted by Into the Vineyard, a Vancouver-based travel company who customizes trips based on wine regions worldwide.

Locally, Okanagan’s Le Vieux Pin, named for a majestic old pine tree in its vineyard, proudly presented their best-selling wine, the 2011 Vaila Pinot Noir rose which is said to have a cult following.  Best paired with charcuterie and cheeses, this dry rose has the delicate summer flavours reminiscent of rhubarb, strawberries and pink grapefruit.  Also from Oliver, BC in the South Okanagan Valley is Hester Creek whose Pinot Gris is a self-acclaimed crowd pleaser containing floral accents and hints of apple, pear, lemon, sage and herbs.

Other highlights included wine on tap by FreshTAP and Clean Slate Wine as well as a treat for chocolate lovers – VinoCacao with its chocolate infused wine, in particular the VinoCacao Ivoire which is a combination of white Bordeaux and dark chocolate.

The Street Meet Truck featured crispy risotto balls ($5) which were creamy in a crunchy crust and extremely unctuous pork belly bites ($7), both sitting on a bed of fresh greens.  They also had items to satisfy the sweet tooth with their tiramisu cannoli cones ($4).  They were partnered with Cartems Donuterie, a gourmet pop-up donut shop located in Gastown which made a special wine-inspired donut for the evening – a concord grape and rosemary donut with a shiraz reduction drizzle ($3).

The evening was capped with prizes, the grand prize being a trip for two to France courtesy of Virgin Atlantic.

A taste of Pakistan with Fusion Kitchen

Top Vancouver chefs duke it out in Variety's Food Fight! The Battle for Brunch