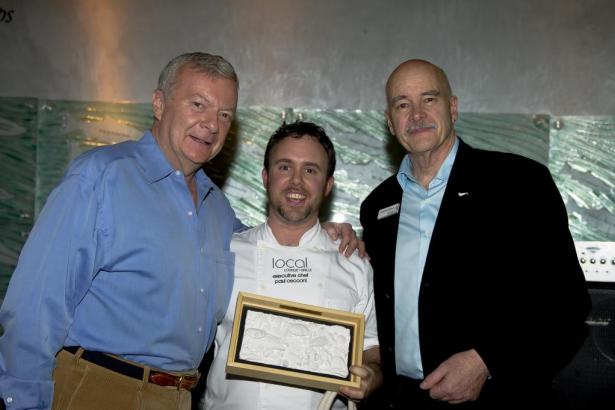 The most inventive and delicious sustainable seafood chowder as determined by a panel of judges, and crowned Vancouver Aquarium’s fourth annual Ocean Wise Seafood Chowder Chowdown Champion on November 23, 2011, was awarded to chef Paul Cecconi of Local Lounge-Grille.

“It was a difficult decision for the judges this year but they unanimously agreed the delectable combination of smoked Ocean Wise Out Landish oysters with parsnips, squash and brown butter bread crumbs in chef Paul Cecconi’s chowder was the well deserved winner of this year’s Vancouver Aquarium Ocean Wise Chowder Chowdown,” said Mike McDermid, Ocean Wise partner relationship manager.

Presiding over the night was CTV’s Michael Kuss as emcee. Guests mingled amongst the backdrop of sea creatures and cozied up to one another with the music of Victoria-based Mindil Beach Markets. I bumped into the always charming Stephane Castera, director of Food & Beverage at the Four Seasons Hotel Vancouver, as we went on a hunt for the best beer and stumbled onto some fine Sandhill Sauvignon Blanc white wine to our delight.

At the end of the night, the Vancouver Aquarium’s Ocean Wise Chowder Chowdown People’s Choice Award was given to chef Natasha Harris of Sunset Bay Yacht Group for her chowder featuring Ocean Wise scallops, clams and mussels, as well as sherry, organic celery and Yukon gold baby potatoes. This was my favorite of the night, and I also heard hearty murmurs of agreement around me as well. I especially enjoyed the fun and whimsical pairing of spicy Dungeness crab chowder with cotton candy wrapped spot prawn presented by the Pacific Institute of Culinary Arts. Another favorite was Hapa Izakaya’s complex and layered dashi-flavored chowder. The third award of the night for best chowder and beer pairing went to YEW restaurant + bar executive chef Ned Bell.