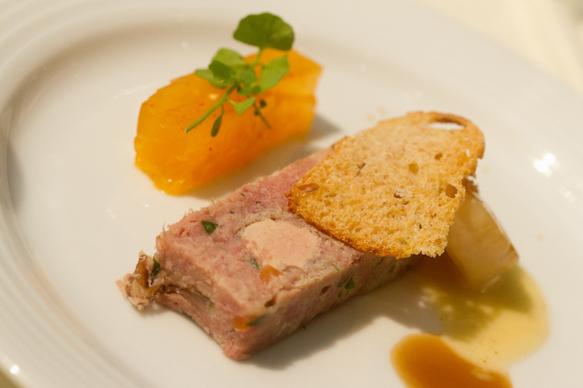 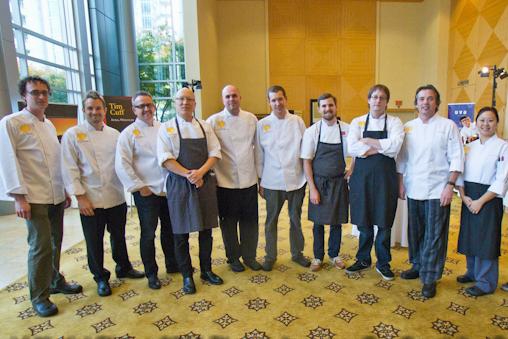 First and last photo by www.RonSombilonGallery.com, all other photos by Roselyn Tam

“It was a challenging and exciting competition and I am very honoured that the Gold Medal Plates judges chose my dish as the best,” said Chef Feenie. “My team and I worked very hard to make our dish the best it could be, and I’m thrilled our efforts resulted in the gold. Now, I’m looking forward to taking this to the next step, and competing for the national title!”

Chef Dale MacKay of ensemble Restaurant also impressed everyone with his culinary prowess, taking the silver medal for the third year in a row. Chef MacKay’s dish was BC Spot Prawns with Pork Thai Broth and Bok Choy paired with Laughing Stock Vineyards’ Pinot Gris, 2010.

Rod Butters of RauDZ Regional Table showed exceptional care in his locavore farm to table concept: an illustrated chart showed the distance where every ingredient in his dish was located to his restaurant in Kelowna. He displayed originality by brewing his own yummy apricot beer just for the event!

“The closest vote ever in Gold Medal Plates history between first and second,” said Head Judge James Chatto. “The difference was 0.15 per cent. We debated for an hour but the numbers do not lie. An awesome evening, a fabulous lineup. Two superb dishes: creative, complex, balanced, harmonious, courageous. This is the Olympics and fractions of a fraction count!”

Marnie McBean, Canadian Olympic rowing champion and emcee for the evening’s auctions, solicited many laughs from the audience with her sarcastic jokes and passionate speech in support of Canada’s Olympic athletes. Guests had the opportunity to mingle with 28 celebrated Olympians and Paralympians such as Simon Whitfield (Triathalon), Ashleigh McIvor (Ski Cross) and Steve Podborski (Alpine Skiing), along with athletes that will be competing for Canada in London in 2012.

The theme for this year’s event was “When London Calls: Canada Will Answer,” referencing next year’s Olympic Games in London, England. A live music band kept the audience entertained: Canadian legends Barney Bentall (Barney Bentall and the Legendary Hearts), Alan Doyle (Great Big Sea) and other musicians, who treated guests to an evening of British classics while sipping premier BC wine like the rich and complex Laughing Stock Portfolio and Calliope Figure Eight.

Guests competed to win a silent auction as well as a live auction, with spectacular getaways with Olympians and Canadian entertainers to destinations such as Tuscany, Napa Valley, Chile, Provence, Burgundy and Kelowna for the Canadian Gold Medal Plates finale.