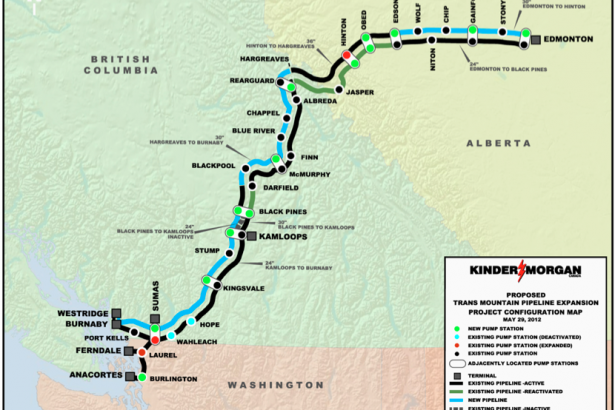 Above you'll see a map detailing what Kinder Morgan's expanded Trans Mountain pipeline expansion would look like. It has not escaped my attention that the map takes its design cues from Harry Beck's iconic London underground map, as well as from the Washington, DC Metro map.

The heavy lines the dots within circles to represent stations, the thin-bordered loops to represent interchanges, these are all indicative of mass-transit maps.

A pipeline has existed along this route since 1952 when it was built to transport methane, which Kinder Morgan purchased in 2005. The Trans Mountain expansion proposal calls for an additional pipeline to run in parallel, as well as reactivating decommissioned sections of the existing line. This will nearly double Kinder Morgan's throughput, from 300,000 barrels per day to 590,000.

Over the past half-century, the use of land along the pipeline has changed, and Tsleil-Waututh Nation and the Squamish First Nations are asserting their right to protect the land and coast.

Spills along the pipeline route would hardly be unprecedented: if you live in Burnaby, you might remember the Burnaby Mountain leak of 2009 (200,000 litres), or the 2007 pipeline rupture that may or may not have reminded you of the opening credits of "The Beverly Hillbillies".

Abbotsford residents, remember the 2004 leak, which spewed out 210 cubic litres of crude? So, yes, we've been here before.

Hang on, wasn't the pipeline project shot down?

You may be thinking of the Northern Gateway Pipeline, pitched by Enbridge. Despite its enthusiasm for the latest in tugboat technology, Enbridge's proposal was rejected by the BC government's joint review panel. You can read the entire 99-page report below if you are so inclined, but the salient line is "'Trust me' is not good enough in this case."

How, then would "trust me" be good enough in Kinder Morgan's case? Not a rhetorical question: the Lower Mainland's stakeholders (which would of course include anyone who lives near the pipeline's route) genuinely want to know.

(And Northern Gateway, in turn, is not to be confused with the Keystone XL pipeline project, which PM Stephen Harper is busily pitching to US President Barack Obama at the G8 summit.)

BC Submission to NGP JointReviewPanel 130531