Second in a series about impacts on people living along the Kinder Morgan pipeline. 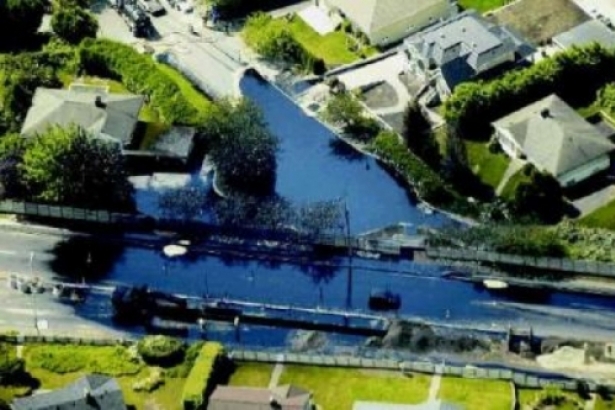 "What does a teacher do when a child is covered in [bitumen] oil? What do teachers do with that?" Burnaby Teachers' Association president James Sanyshyn has been trying to get a clear response to that question for over a year, since publicly calling for specific training for teachers in the event of an oil spill.

Texas-based pipeline giant Kinder Morgan is applying to twin its existing Trans Mountain pipeline and expand operations to carry 890,000 barrels of oil per day from its Edmonton terminal in Alberta to Burrard Inlet. The new pipeline would move heavy diluted bitumen from Alberta's oil sands to markets in Asia and the U.S.

With the fate of Enbridge's proposed Northern Gateway pipeline unresolved, some analysts see Kinder Morgan's pipeline expansion proposal as a key to unlock a treasure trove of riches that can be made if more of Alberta's tar sands product can get to market.

Because the Trans Mountain pipeline is now 60 years old, and runs through an earthquake risk zone, Sanyshyn has been lobbying for teachers to receive safety training and evacuation training for oil spills and jet fuel exposure. But so far, Sanyshyn said, the response has been mainly "lip service".

"We did lobbying work last year, and got it on our district health and safety agenda," he said. Sanyshyn has been asking if there has been any training, but while people say things are "in order", no one appears to know any specific procedures.

Diluted bitumen and jet fuel both pose serious safety threats to human health. Bitumen contains benzene, a carcinogen, while jet fuel pipelines are under high pressure and can be explosive. As the first adults on the scene in such an event, teachers should have basic training and knowledge of the risks, he argues.

Stoney Creek Elementary in Burnaby is along the Kinder Morgan oil pipeline route, indicated by the yellow warning sign.

Burnaby School District health and safety officer Terry Gomez admitted that the basic procedures -- calling 911 and poison control -- were all that were available for schools near the pipelines so far. But it's changing, he assured. He said the School District was in talks with Kinder Morgan and would have more information available soon. In fact, he's just asked the company questions including what to do if a child was covered in oil, beyond just washing it off.

But Gomez said he felt the chance of another oil spill like the one in 2007 happening near a school were "extremely remote".

"When I look at the schools closest to pipelines, there's just no chance there's going to be any digging," he said. "You have to keep in mind that the accident (in 2007) was just an error caused by a contractor. What are the risks of that happening next to a school? It's almost zero."

He said the schools would be given more information from Kinder Morgan to keep children safe, but that "a lot of common sense decisions have to be made, regardless."

In light of recent spills along Trans Mountain pipeline in Hope and Merritt, however, some educators aren't convinced that incidents are rare. And British Columbia recently topped the list of Canadian provinces where pipeline incidents have occurred, with 279 recorded events from 2000 to 2012.

"Call 911 and poison control if necessary."

Although there are 22 schools in Burnaby near oil infrastructure such as Kinder Morgan's oil and jet fuel pipelines, teachers so far have little more than phrases like the ones above to work with in the event of a major spill or fuel tank leak near a school.

When the Vancouver Observer asked Kinder Morgan if the company is providing any information to schools about how teachers should respond in the event of an oil spill,  Kinder Morgan Canada external relations director Andy Galarnyk said, "Police and fire departments are the experts in evacuation. We would work with them in the unlikely event an evacuation was required at a nearby school."

"So, basically, we're on our own," laughed Wendy Major, a retired schoolteacher and Chilliwack resident who has been campaigning with Pipe Up Network to raise awareness about schools near the pipeline.